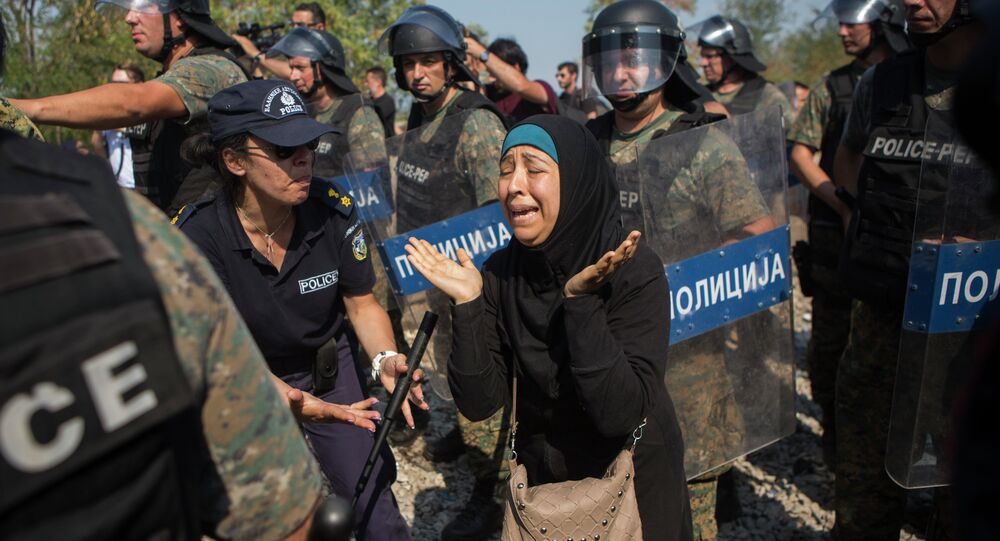 One year on from the agreement to relocate 160,000 refugees from Greece and Italy, analysis by Sputnik shows that only three percent have actually been moved, amid growing opposition to the scheme and deep divisions in Europe.

In Greece many men, women+ children eligible for EU relocation still live in sites with poor conditions and security pic.twitter.com/0bbagVCmbh

Out of the 25 EU countries involved in the scheme, so far, only 15,000 places have been offered, because of opposition to the use of mandatory quotas to designate how many refugees a country will take under the scheme.

© AP Photo / Petros Giannakouris
In this Sunday, March 20, 2016 file photo, volunteers help migrants and refugees on a dingy as they arrive at the shore of the northeastern Greek island of Lesbos, after crossing the Aegean sea from Turkey.

The news comes as human rights group Amnesty reveals in a new report, "Our hope is broken," that migrants are living in appalling conditions and the uncertainty asylum seekers feel about their future is fueling tensions that have erupted into violence in a number of camps.

According to the report, Greek police, usually citing lack of capacity, rarely intervene to ensure their safety or prevent further violence.

Many — including young children — Amnesty International spoke to, feel unsafe in the camps. Fearing retaliation and knowing that the police are unlikely to intervene, many asylum seekers are deterred from reporting violence.

"The solidarity of individuals across Europe stands in stark contrast to the paralysis of Europe's leaders. The EU is not just far from sheltering a proportionate share of the world's 21 million refugees;  it is also failing in the very manageable task of offering dignity and safety to those that have survived the perilous journey to get there," Amnesty said.

The flood of people making the land journey through the West Balkan route led to many countries closing their borders — against the principle of a Schengen borderless Europe — exposing massive security flaws at EU's external borders.

The humanitarian crisis is further deepened by the gradual failure of the controversial EU-Turkey migrant deal under which those refused asylum in Greece are returned to Turkey for EU cash.

That deal is slowly becoming unraveled because of rising opposition to the deal within Europe over Turkish President Recep Tayyip Erdogan's increasing grip on power, clampdown on opponents and serious doubt over Turkey's record on free speech and human rights.