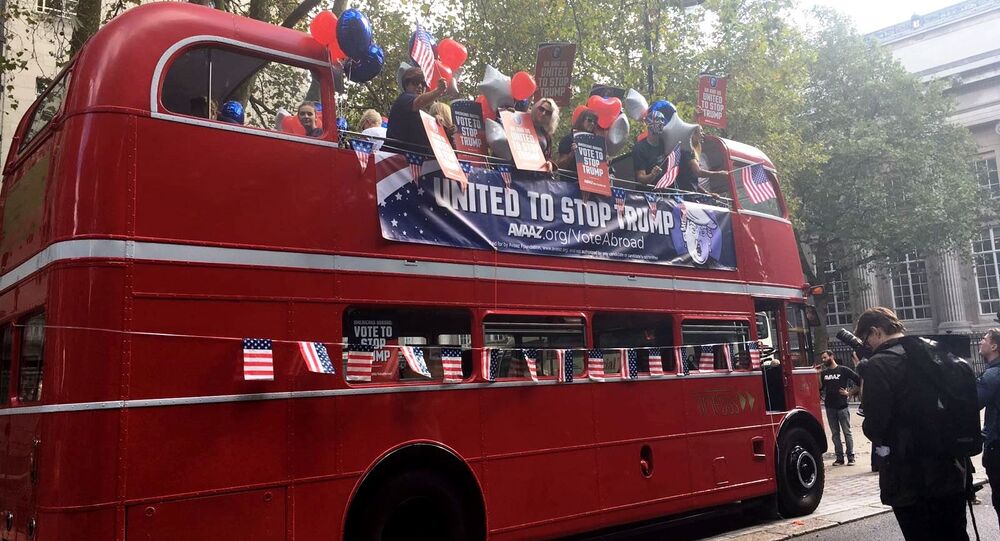 London 'Stop Trump Bus' Could be Seen as Anti-Democratic

An anti-Trump bus hit the streets of London Wednesday, September 21, encouraging US expats to vote in the next presidential election and to make sure they back Trump’s main opponent, Hillary Clinton.

The organizers, Avaaz have called this a "cheeky attempt to stop Trump" and mobilize American expats across the city to register and vote. Starting at Russell Square and then moving towards St. Paul's Cathedral and Westminster, the bus will be traveling around London.

However, could this be an anti-democratic move by the organizers?

Avaaz position themselves as "a global web movement to bring people-powered politics to decision-making everywhere." However, actively trying to persuade people to vote a certain way can be viewed as political lobbying rather than mere activism.

​Sputnik spoke to Colin White, a recent Master's graduate from the US, about his decision to protest and "persuade" expats to "stop Trump."

Mr.White said that Trump's rhetoric was the biggest reason for him to join the "Stop Trump Bus" campaign.

​"His rhetoric of bigotry and xenophobia is not what America is about," Mr. White told Sputnik.

"Hilary will definitely be a better president, especially when she has served as Secretary of State, that kind of experience could really help America's foreign policy."

​Mr. White said expats needed to be aware that they can vote and have the power to "stop Trump" from reaching the White House.

"I believe this bus will help to increase more votes in an election that is very key," Mr. White said.

While some fans took to Twitter, calling the bus "a great cause," the question still remains if this could potentially be seen as an anti-democratic move?

In the traditional game of politics, a candidate wins over an audience by convincing them that his or her policies are worth voting for, not by their supporters telling others who not to vote for.

In this particular case, it's a no-brainer that if you ask people to "stop Trump," you are asking them to vote Hillary instead.

The 8 million Americans abroad almost never vote. This dead easy tool can fix that but only if we make it famous: https://t.co/z4l7lekdub

​Avaaz, who were unavailable for comment, on their website claim that the 8 million US citizens living abroad could "defeat Trump" if they voted against him.

Czech President: 'I Would Indeed Vote for Trump if I Were US Citizen'