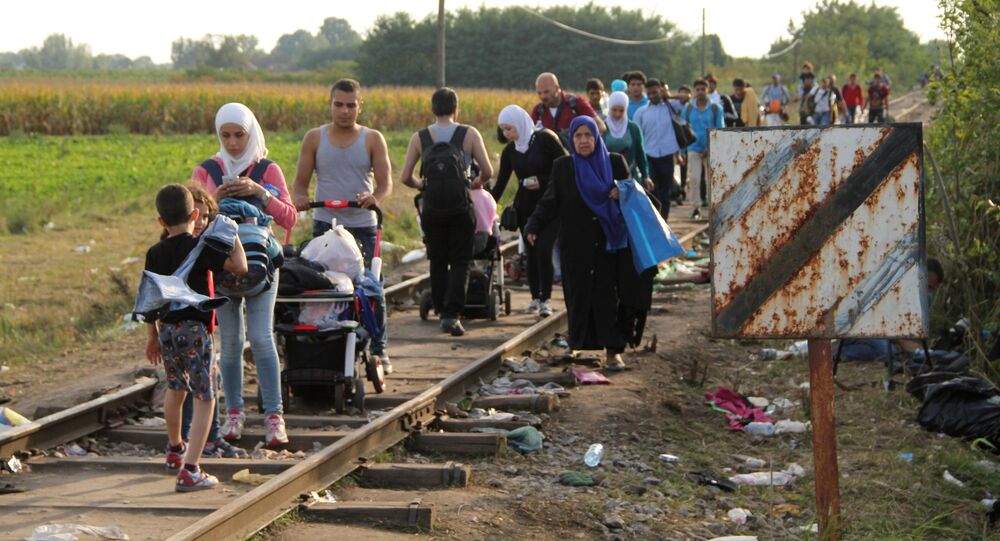 Despite United Nations efforts to address the plight of refugees, the next few years promise drastic changes in the EU as migration has prompted a visceral reaction from populists and Eurosceptics, according to experts.

© REUTERS / Michaela Rehle
Displaced, but Home for the Holidays: Jobless German Refugees Vacation in Countries of Origin
The current migration crisis is unlikely be resolved within the next several years, as Europe is expected to go through a whole array of drastic changes, RIA Novosti quoted experts as saying.

Their remarks came as the UN General Assembly adopted a declaration on refugees and migrants during its regular session, which opened in New York last week.

This legally non-binding document stipulates that signatories indicate their intentions to hammer out two global agreements on the regulation of migration and the equitable sharing of responsibility for receiving refugees.

Current immigration policies have already been harshly criticized across the EU, where right-wing populist parties have been gaining popularity. This is particularly evident in Germany, where Alternative for Germany (AfD) has emerged as a major force in the political arena.

During the elections in German Chancellor Angela Merkel's home state of Mecklenburg-Vorpommern earlier this month, the AfD managed to get the better of Merkel's ruling Christian Democratic Union party (CDU). Two days ago, the AfD made major gains in Berlin's elections at the expense of the CDU, which suffered its worst-ever results in the capital.

Other parties with similar rhetoric have made gains across Europe, such as France's National Front, the Freedom Party of Austria, and the Party for Freedom in the Netherlands.

"These parties are supported by those who see that social life is changing as their countries are occupied by foreigners, and who fear losing their social status. Their position leads to a conflict with those who are opposed to them", Turkish foreign policy professor Huseyin Bagci, a panelist from the Valdai Discussion Club, a Moscow-based think tank, said.

According to him, Europe's current political landscape is not as stable as it was before, and Angela Merkel, the personification of European stability, may well lose next year's elections. Besides Germany, the migration issue has already split the political discourse in Europe's north and east.

"In Eastern Europe, especially in Poland, the Czech Republic, Slovakia and Hungary, the authorities are against any quotas for the reception of refugees, and are trying to prevent the populists' position from gaining strength", according to Stefan Meister, program manager for Eastern Europe and Central Asia at the German Council on Foreign Relations.

"Developing a dialogue between people with different views is an understandably difficult task", RIA Novosti said regarding Europeans who are trying to follow the debate on migration, now that authorities such as Hungarian Prime Minister Viktor Orban are borrowing arguments from right-wing populists.

As far as the migration crisis is concerned, much will depend on the fate of the agreement concluded between the European Union and Turkey.Ankara describes some aspects of the deal as interference in the country's internal affairs, and the renewed context of the discussion on refuges may reinforce Turkey's reluctance to give in to Brussels' demands, RIA Novosti said.

It quoted another Valdai Club expert, University of Innsbruck political science professor Gerhard Mangott, as saying that Ankara has clearly stated that it will not adhere to the migration agreement with Brussels if the EU fails to grant Turkish citizens visa-free travel by the end of October 2016.

"The EU is unlikely to fulfill this requirement because Brussels insists on the implementation of all the 72 requirements that were put forward toward Turkey. In particular, these include amendments to the country's anti-terrorism legislation, which is unacceptable for the Turkish government,"Mangott said.

Stefan Meister, for his part, believes that Turkish President Recep Tayyip Erdogan is not interested in the complete isolation of his country from the European Union.

© REUTERS / Fabrizio Bensch/Files
From Greek Debtors to Syrian Refugees, 'Merkel Saves Everyone Except Germany'
"Turkey is adhering to the March agreement, at least for now, and the EU member states realize that much will depend on Ankara's position," he said.

"A lot will also depend on the situation in Syria and their ability to stop the war there, as well as to reduce the number of refugees. I think that right now, both sides are interested in adhering to the agreement," Meister concluded.