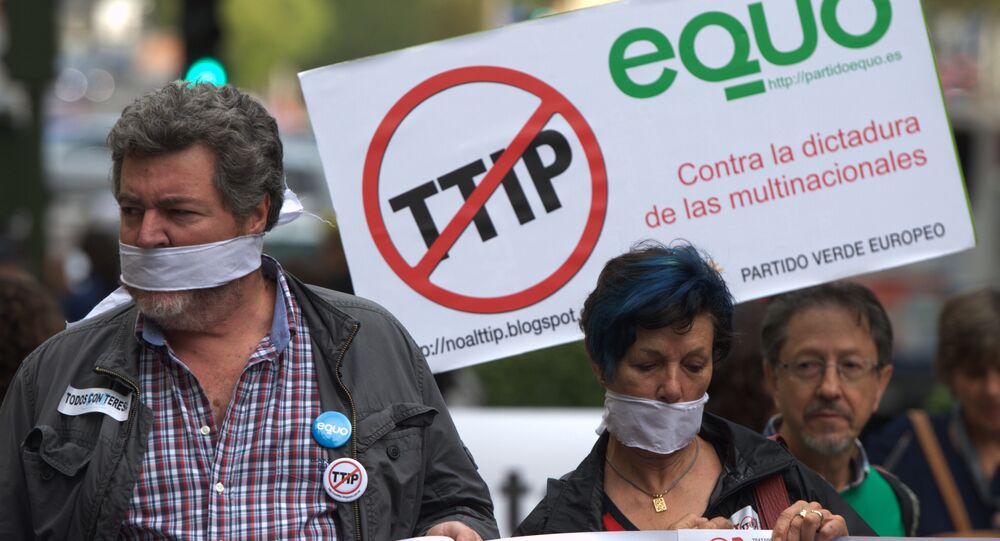 MOSCOW (Sputnik) – The heads of the UGT and CCOO unions which organized the events, Pepe Alvarez and Ignacio Fernandez Toxo, respectively, participated in a rally outside of the headquarters of the European Commission in Madrid, submitting a letter to institution’s head Jean Claude Juncker expressing their concern over impacts of deals on employment, justice and democracy.

"There are many reasons to oppose TTIP especially because it is an agreement about which we know nothing, which deprives us of rights, which will make companies impose their laws on us, which threatens the environment, which does not respect democracy because decisions of businesses and special courts will be more important, and which is ultimately against our fundamental rights," Alvarez said, as quoted by the union.

© Sputnik / Ilona Pfeffer
Hundreds of Thousands Rally Against TTIP, CETA Trade Deals Across Germany
In September 2014, the European Union and Canada announced the conclusion of the CETA agreement. Brussels and Ottawa hope that CETA, which seeks to lower trade barriers and create more jobs, will be signed this fall and implemented in early 2017.

TTIP is intended to establish a free-trade zone encompassing the United States and the European Union. Washington and Brussels began negotiations toward the agreement in 2013. Details of the agreement, including rules on market access, haven’t been made public. The TTIP has drawn criticism for a lack of transparency surrounding the negotiations and for the power it would potentially give multinational corporations.

Over 1,000 Rally Against CETA, TTIP Free Trade Deals in Berlin