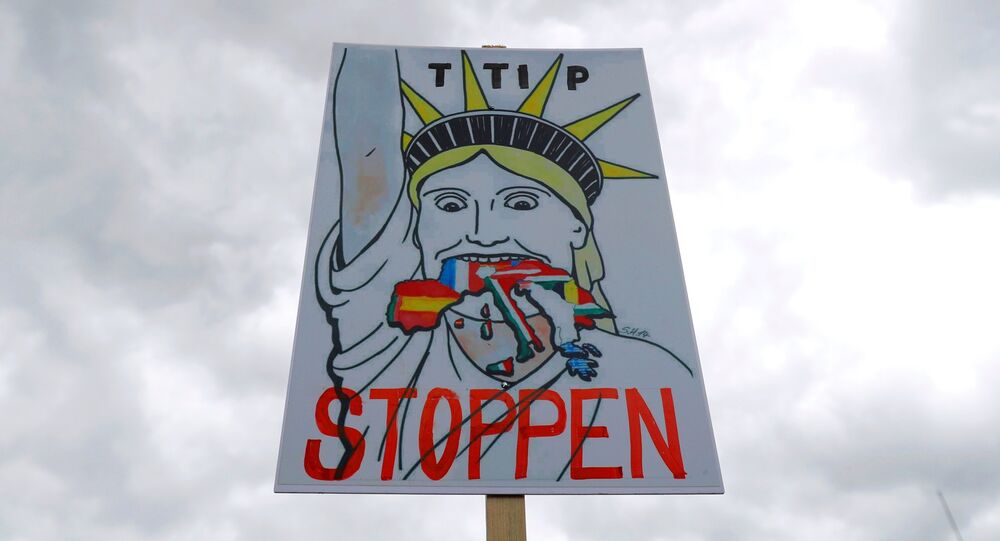 Up to 100,000 people are expected to rally against the EU-US Transatlantic Trade and Investment Partnership (TTIP) across major German cities, a spokesperson for the police told RIA Novosti Friday.

BERLIN (Sputnik) — German activists has notified police about a planned Berlin demonstration against the TTIP.

"According to the form, 100,000 people would participate [in the rally]", the spokesperson said, adding that the event, organized by the German movement Naturfreunde Deutschlands, would take place on September 17.

Naturfreunde Deutschlands is an international environmental movement which seeks to make nature accessible to more people by means of recreational and travel facilities.

© Flickr / Campact
EU-US TTIP Agreement Talks Unlikely to Progress Before June 2017
According to the organization's website, the rallies will be also held in such German cities as Hamburg, Stuttgart, Cologne, Munich, Leipzig and Frankfurt.

The TTIP deal, which seeks to establish a free trade zone between the United States and Europe, has caused a major public backlash, with European fearing it could seriously violate ecological standards, as well as give tremendous power to the international corporations.

In August, German Vice-Chancellor Sigmar Gabriel said the negotiations with US officials on TTIP had "de facto failed" because Europeans do not want to subject themselves to US demands. However, on September 9, Chancellor Angela Merkel denied that the TTIP deal was doomed and urged to grasp this opportunity to create new jobs.

EU-Canada Trade Deal Could Become a 'Trojan Horse' for TTIP