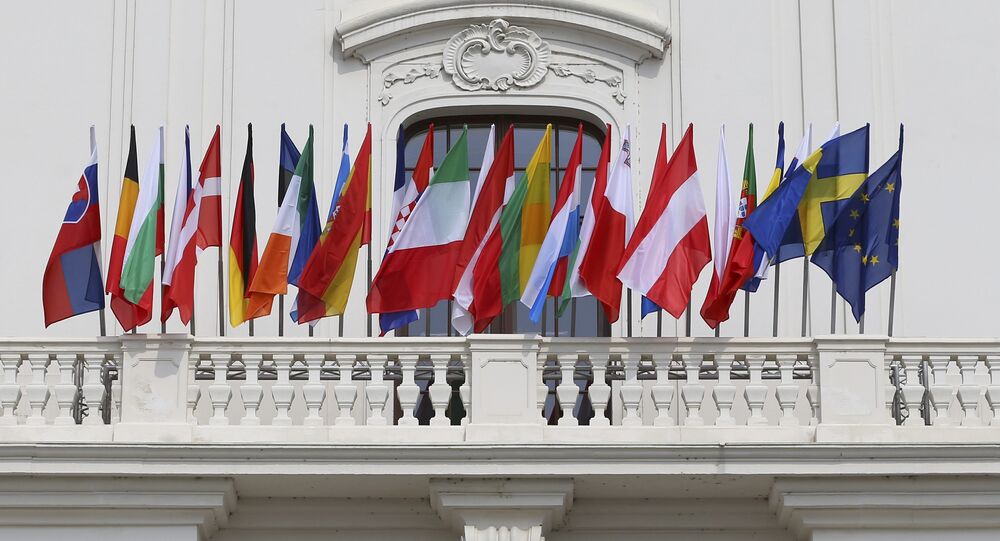 © AP Photo / Virginia Mayo
Bursting at the Seams: EU States Taking Advantage of Brussels' Weakness
The EU's summit of 27 countries in Bratislava this week, the first such meeting after the UK's decision to leave the Union, sets the stage for a showdown between the EU's rival factions, German news magazine Fokus.de reported.

Leaders of the 27 EU member states invited to the conference arrived in Slovakia on Friday morning. Following the Brexit vote, UK Prime Minister Theresa May was not invited to the meeting, at which the EU Council intends to hammer out the future of Europe.

Brexit was not on the agenda of the summit, which is an ostensibly informal event aimed at forging unity ahead of the Rome summit next March, which marks the 60th anniversary of the establishment of the European Community, the EU's predecessor.

However, that ambition appears a tall order given the scale of the differences between the member states regarding their vision for the EU.

"Club Med," a group of countries which held their own mini-summit in Greece last weekend, is a particular worry for Brussels and Berlin. The leaders of France, Italy, Portugal, Cyprus and Malta accepted an invitation from Greek Prime Minister Alexis Tsipras to discuss their objections to the austerity policy favored by the northern European countries.

"Our countries were hardest hit by the economic crisis … and are now on the front line of the migrant inflows," Tsipras said, calling on the group to adopt "a common approach, common positions," to their problems.

© CC0
North-South Divide, East-West Split: EU Tensions Rising Over Key Issues
Northern European countries like Germany who support austerity are concerned about the development of a "Club Med" promoting more state investment and debt relief to stimulate economic growth in the EU, particularly after the departure of the UK.

"After Britain's departure, the 'Club Med' will have a blocking minority that can prevent all kinds of laws in Brussels that it does not like," Ferber said.

Meanwhile, the Visegrad countries (Hungary, Slovakia, Czech Republic and Poland) are also holding regular meetings, and have regularly spoken out against Brussels' plan to impose migrant quotas that resettle immigrants across Europe. They also oppose the open borders policy pushed by Berlin and Brussels, and want to maintain strict border controls.

"We have to get out of Brussels. The city only gives people a bad feeling," he said, as reported by the German newspaper Frankfurter Rundschau.

Frankfurter Rundschau asked whether the summit means "The End of the EU?" and referred to splits in the union between north and south over economic policy, and east and west over migration and sovereignty.

Polish Prime Minister Beata Szydlo and Czech Prime Minister Bohuslav Sobotka have called for the national governments to take back power from Brussels, which has fired back criticism regarding their stance on migration.

"We want the national governments to have a stronger position," Szydlo said, while Sobotka said that the EU Commission should cede powers to national parliaments, which have "real legitimacy."

© REUTERS / Fabrizio Bensch/Files
From Greek Debtors to Syrian Refugees, 'Merkel Saves Everyone Except Germany'
Der Spiegel referred to the Bratislava summit as a chance for Hungarian President Victor Orban and EU Parliament President Martin Schulz to enter the ring and fight out their differences.

"The ring is free for Schulz vs Orban," the paper wrote, in expectation of a conflict.

"For as long as people like Hungary's Prime Minister Victor Orban say 'refugee policy does not concern us, that is Germany's problem,' Europe cannot meet the challenge," Schulz has said.

For his part, Orban has called for a national referendum to be held on the issue of migrant quotas in October.

The referendum asks Hungarians, "Do you want the European Union to be entitled to prescribe the mandatory settlement of non-Hungarian citizens in Hungary without the consent of parliament?" and appears likely to give Orban further support in his efforts to prevent the EU's resettlement of asylum seekers.