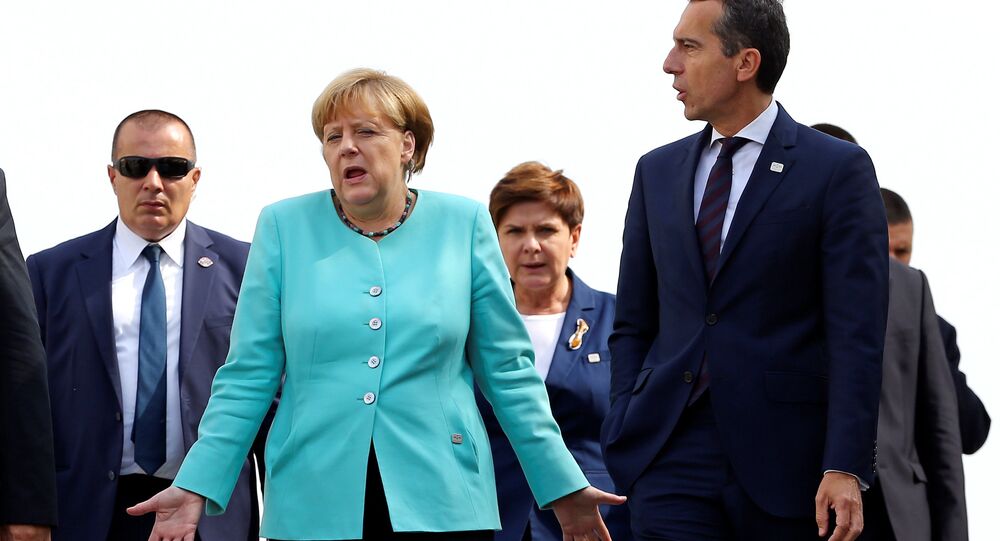 EU Can't Keep It Together, Attempts to Relaunch the 'European Project'

German Chancellor Angela Merkel has given a grave assessment of the state of the European Union, calling the current situation "critical". Her comments come from a special Bratislava EU summit - without the UK - that hopes to stabilize the bloc left tarnished by Brexit.

It's been labeled an existential crisis by political commentators, with the unprecedented first exit of a member since it's creation, hostile recriminations between polarized members, the rise of European far-Right nationalism and three upcoming key elections. How can EU bureaucrats keep the remaining 27 members of the EU bloc stable together?

German Chancellor Angela Merkel, a leading proponent of the EU project, who advocates even further federalization across Europe, acknowledged that the EU is at something of a crossroads.

"We have to show with our actions that we can get better…in the domain of security, internal and external security, the fight against terrorism, and in cooperation in the field of defence."

Leaders from the remaining 27 members of the EU met in Bratislava, Slovenia on Friday for crisis talks on the future of the EU.

The chair, European Council President Donald Tusk, had few positive words to offer to raise morale, calling on his fellow EU leaders to take a "sober and brutally honest" look at the bloc's many problems.

At stake is how to bridge the increasingly gaping divisions between members over how to tackle several of the world's key issues.

One such priority, is how best to manage the migrant crisis that's seen more than a million migrants and refugees cross into Europe since early 2015. There are hostile public disagreements over how different European countries should resettle people.

Last week, Luxembourg's foreign minister, Jean Asselborn, called for Hungary to be thrown out of the EU for treating asylum seekers in what he called "worse than wild animals."

Hungary has take a hardline stance against asylum seekers, building a 500km razor-wire fence along it's southern border with Serbia, a non-EU nation. Some 10,000 police and soldiers have been deployed to seal the border and turn migrants away, a policy that has been denounced by the United Nations refugee agency, the UNHCR.

Hungary's president Viktor Orban, has been publicly dismissive of the EU's official policy of mandatory migrant quotas, calling for a reduction in Brussels' power.

Hungary is to hold a referendum in October on whether to reject the EU's migrant policy in what would be a serious challenge to the EU.

One significant challenge to EU authority has, of course, already landed in the form of the UK's decision on June 23rd to leave the EU.

British Prime Minister Theresa May has yet to formally begin exit negotiations with the EU, and the swirling uncertainty throughout Europe as to what impact such a schism will have, continues to cause anxiety.

On the eve of the Bratislava conference, European Council President Donald Tusk, said:

"We haven't come to Bratislava to comfort each other or even worse to deny the real challenges we face in this particular moment in the history of our community after the vote in the UK," Tusk said.

"We can't start our discussion… with this kind of blissful conviction that nothing is wrong, that everything was and is OK. We have to assure… our citizens that we have learned the lesson from Brexit and we are able to bring back stability and a sense of security and effective protection."

However, some critics of the EU, say it has not learn such lessons at all.

One of the key narratives emerging from the UK referendum was that there is a perception that Brussels has too much accountable power, to the detriment of control within each nation state.

Yet on Wednesday, in his annual 'State of the Union' address to the European Parliament in Strasbourg, European Commission President Jean-Claude Juncker called for even further federalization, with the creation of an EU-wide military force.

Indeed, much is at stake at Friday's Bratislava summit, but some Brussels insiders see the chance of a breakthrough show in unity as being slim.

"Either we move in the direction of disintegration, of dilution, or we work together to inject new momentum, we relaunch the European project."

EU Has No Time to Get Stuck on Brexit, Should Move Forward - Estonian PM