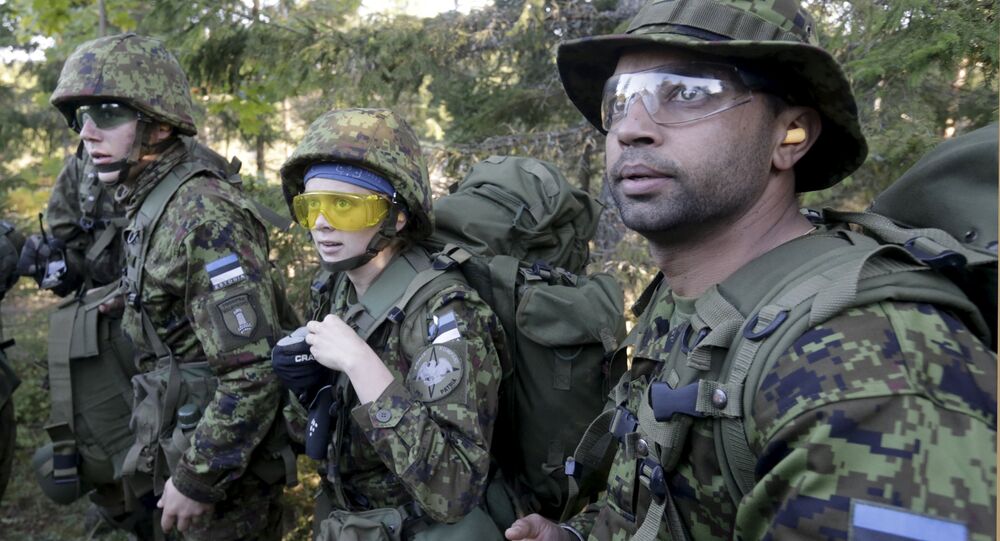 An internal memo to the Security Commission of the Estonian government which warned about the possibility of "Donbass scenario" in the country's north-east, on the border with Russia, was leaked to the country's media on Wednesday; and while some experts call it a "paranoia", others suggest it might be a deliberate provocation.

An internal memo to the Security Commission of the Estonian government was leaked to Estonian media on Wednesday, a year after it was originally submitted.

The document, drawn up by Estonian psychological defense advisor and communication coordinator to the country's government Ilmar Raag, warned about the possibility of a "Donbass scenario" and "Northern Ireland scenario" in the country's north-eastern County of Ida-Viru, or Ida-Virumaa, on the border with Russia.

© Sputnik / Alexei Danichev
The Narva fortress, left, on Estonian territory and Ivangorod fortress on the territory of Russian, right.

The three-page note asserted that in case of a conflict with Russia, Estonia might lose control over the region, which has been "consistently Russified" for a number of years.

It suggested that out of the county's 150,000 population, 60 000 would have passively supported the conflict, while 1,500 could have taken an active part in it, according to local media reports.

There are now 50,000 people who have a negative attitude towards Estonia for an "economic reason."

Under the "North Ireland" scenario, the note says, an "ideological standoff" could be provoked by a "200-people strong local terrorist network supported from outside."

The document also says that the "outburst" in the region might also be also caused by the unfavorable social situation. Only one fifth of the population are Estonians and the figure is even less in large cities – around 5%. The county has the highest rates of unemployment and crime in the country.

© REUTERS / Ints Kalnins
Baltic States Not Fixated on Russian Threat - Latvian Defense Ministry
The authors also expressed alarm over the loyalty of the local residents towards Russia and their negative attitude towards the US and NATO.

The residents think that Estonia's good relationship with Russia is a guarantor of the country's security and every third resident believes that Russia has the right to protect its compatriots residing on the territory of the former USSR.

The leak sparked an uproar in the local and Russian media.

Police and Border Guard Board (PPA) director-general Elmar Vaher told the country's newspaper Eesti Ekspress that his department has been studying the scenario of an "invasion by little green men."

Raul Rebane, an expert in strategic communication at the Estonian Internal Security Service (KaPo) said that the memo was not just simply "pulled out of thin air," it describes a potential crisis situation which however will "luckily not become a reality."

© Sputnik / Igor Zarembo
Will 'Defense Schengen' Cure Baltic States of Anti-Russian Paranoia?
"When the information which is only at the disposal of this particular commission is leaked, it causes serious doubts in the honesty and loyalty of its members," he said.

"This is a schizophrenic situation where the member of one and the same team betray each other time and again," he added.

The politician also noted that the memo could be interpreted in a way that the government regards the residents of Ida-Virumaa as potential terrorists and is planning some repressions in the region. It could be dangerous for Estonia if such leaks continue.

The deputy to the country's parliament from Ida-Virumaa, Mikhail Stalnukhin told Russia's online newspaper Vzglyad that the authors of the memo have already been called paranoiacs.

"In fact, there are no pre-conditions for the repetition of the Donbass or North Ireland's scenario in the region," he told the website.

© Sputnik / Sergey Stepanov
This is Who NATO's Real Enemy is and It's Not Russia
"However there are a number of organizations which exploit the "Russian threat" scenario," he said.

The politician said that this particular case is like a situation with a cat which is fed only when there are mice in the house. When there are no mice, but the cat "needs the budget money", he simply "invents them."

What concerns the parliamentarian is that similar leaks appeared in the spring of 2007 when there was a scandal around the removal of the Bronze soldier monument in Tallinn. Then the Soviet World War II memorial was removed from the center of the city and the "society then was also threatened with the Russian threat and possible loss of sovereignty."

The politician suggests that this leak might also be a provocation against the Russian-speaking residents of Ida-Virumaa and pro-Russian politicians.

Estonia Not to Negotiate Defense Issues With Russia

Russia-Wary Estonia to Cough Up €75 Mln for Border Surveillance