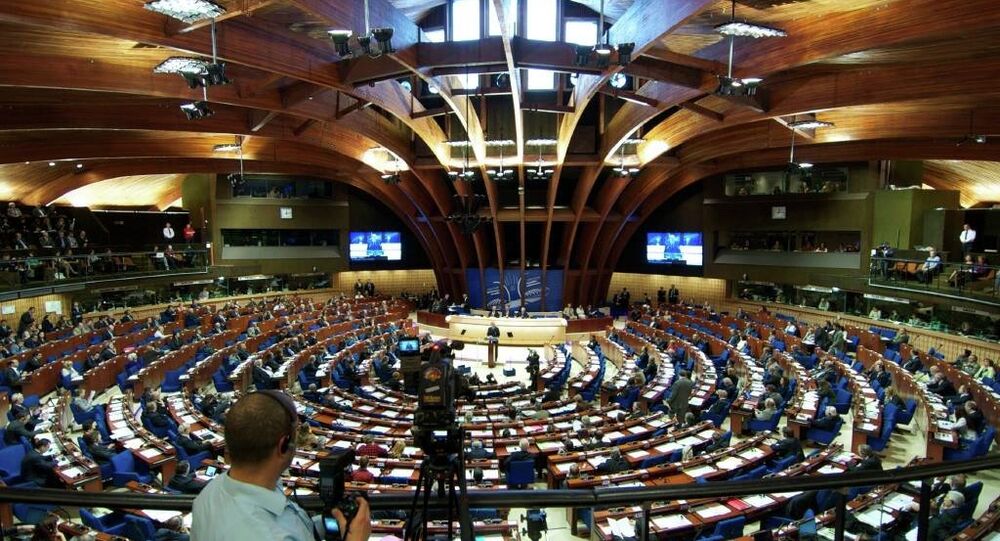 On Monday, Foreign Minister Pavlo Klimkin warned that Ukraine might walk out of the Council of Europe's Parliamentary Assembly (PACE) if the Russian delegation returns to the body. Commenting on the threat, Russian experts suggested that Ukrainian officials would have to be extremely short-sighted to follow through with such a ridiculous gesture.

Speaking to Ukraine's ICTV television channel on Monday, Klimkin emphasized that "if Russia has its rights restored, in PACE for example, we will consider our options, to the point of non-participation in the organization. Of course, I cannot tell this to Ukrainian lawmakers, this would be their decision to make, but I will advise them to take very radical steps."

PACE's own officials have also warned that Kiev's exit from the body would be 'counterproductive'.

On top of that, PACE officials and their Russian counterparts recently confirmed that there is a very good chance of Russia restoring its status in the organization as soon as early next year.

© Sputnik / Vladimir Fedorenko
Russia May Return to PACE in 2017 - Federation Council Speaker
PACE adopted a resolution to bar Russian lawmakers from participating in its three key bodies in April 2014, following the deterioration of relations between the West and Russia over the crisis in Ukraine. Russia did not renew its credentials ahead of the organization's winter 2016 session, and made its return conditional on the full restoration of Russian delegates' voting rights.

If this happens, Kiev would be put on the spot to make a decision on whether to follow through with their threat to walk out. Accordingly, political analysts have said, Foreign Minister Klimkin seems to have painted himself into a corner.

Asked to comment on Klimkin's remarks by the independent online newspaper Svobodnaya Pressa, Alexander Bezpalko, a member of the Russian Presidential Council and expert on Ukrainian affairs, suggested that a decision by Kiev to leave PACE "would be just wonderful."

"In this case, Russia would remain in PACE, and Ukraine, a source of problems, including for most members of the European Union, would exit the organization," Bezpalko added. "Unfortunately, Ukrainian politicians, their military and public figures do not ever keep their word. Therefore, I am convinced that if Russia restores its rights in PACE, Ukraine will not leave the organization, but only continue to raise a ruckus."

In the expert's view, Foreign Minister Klimkin's threats amount to little more than an attempt to begin another anti-Russian political campaign. "For this purpose, Kiev is prepared to use any pretext."

The only problem with Ukrainian officials' efforts is that "Russia is a major power, and makes a significant financial contribution toward PACE's existence. It defines policy in the Middle East. And copes even under sanctions. Russia commands more respect and willingness to cooperate than contemporary Ukraine, which managed to destroy its economy without any sanctions, and whose president is constantly out asking for money, to the point where he has become a source of ridicule."

© Sputnik / Vladimir Sergeev
EU Extends Sanctions Against Russia, Ukraine Citizens Until March 2017
The reality, according to Bezpalko, is that post-Maidan Ukraine has turned into a massive burden for Europe, "especially since it was because of events in Ukraine and due to Ukrainian authorities that Europe cannot improve relations with Russia."

"One can only hope that Ukrainian's lawmakers will live up to their promises, and really do leave PACE," the expert noted. "And if they leave the United Nations as well, it would be possible to breathe more freely."

Ultimately, Bezpalko suggested that the kinds of statements being made by Ukraine's current authorities are simultaneously humorous and tragic, tragic because they have accompanied the collapse of Ukrainians' standards of living, the country's social services, and its security against crime and social instability.

Alexander Gushchin, an associate professor and expert on post-Soviet countries at the Russian State University for the Humanities, told Svobodnaya Pressa that the poor state of contemporary Ukrainian diplomacy is to blame for the kinds of irresponsible statements made by its diplomats. This has manifested itself in every area, according to the expert, from vacant ambassadorships in important countries like Belarus and Hungary, to miscalculations made during the Dutch referendum on the EU-Ukraine Association Agreement.

As for Klimkin's PACE remarks, Gushchin suggested that they amount to little more than posturing, with the hope that the European organization doesn't take the next step. At the same time, "it also shows a certain degree of anxiety by the Ukrainian government, given the [changing] position of the European elite with regard to Ukraine and Russia."

© REUTERS / Michalis Karagiannis
Southern European Countries Unite Against Brussels and Berlin
"At this stage," the analyst noted, "the trend toward a transformation in the perceptions of the European elites toward the [Ukraine crisis] is clear, especially if we are talking about countries such as France and Italy – that is, Europe's southern flank."

At the same time, Gushchin emphasized that "there is no question that a great deal will depend on the position taken by the United States, and on elections there. But the latest events, connected to the health of the Democratic candidate, certainly aren't to Kiev's benefit…All this explains the high level of concern from Ukrainian officials; they are forced to demonstrate their 'tough stance', in the hope that everyone will be convinced that the US stands behind them."

Russia May Return to PACE in 2017 - Federation Council Speaker

Ukraine May Put PACE Membership on Hold if Russia Returns