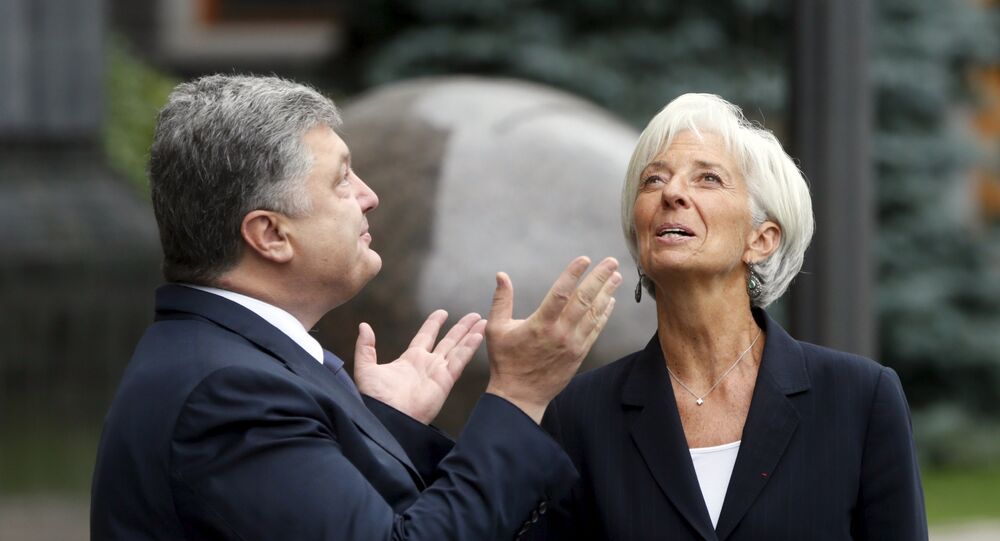 The International Monetary Fund (IMF) has decided to allocate a new tranche of aid to Ukraine, as the country is succeeding in implementing reforms, according to Ukrainian President Poroshenko.

© REUTERS / Kim Kyung-Hoon
Moscow Against Changes in IMF Rules to Provide Kiev With Next Loan Tranche
KIEV (Sputnik) – The International Monetary Fund (IMF) has decided to allocate a new tranche of aid to Ukraine, as the country is succeeding in implementing reforms, Ukrainian President Petro Poroshenko announced.

"This decision of the IMF says that the world acknowledges that reforms are taking place in Ukraine, quality changes occur, the country is moving in the right direction," Poroshenko wrote on Twitter.

According to a statement posted on the official website of the president of Ukraine, the new aid includes $1 billion of assistance from the United States and 600 million euros (over $675 million at the current exchange rate) more from the European Union.

"It opens a window of opportunity to attract foreign investment in the Ukrainian economy," the Thursday statement says.

Ukraine heavily relies on foreign aid to support its economy and to pay its debts amid an ongoing armed conflict with independence supporters in the country's southeast.

On March 11, 2015 the IMF approved a four-year program of financial aid to Ukraine, which stipulates a $17.5 billion loan over the next four years. The bailout package for Ukraine requires that Kiev implement a number of political reforms.

In June, Ukrainian Prime Minister Volodymyr Groysman said that the country expects to receive a total of $1.7 billion from the IMF in 2016.