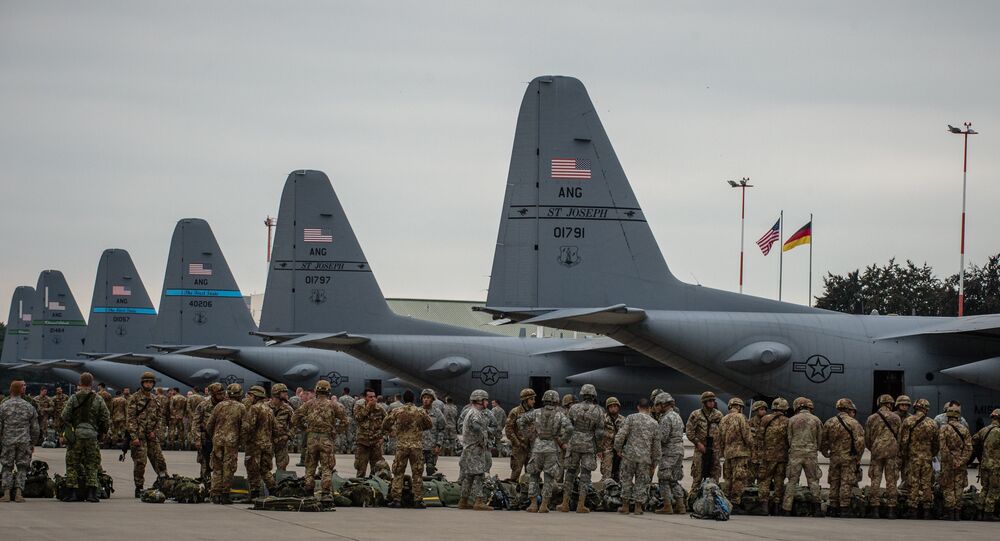 Germany's Ramstein Air Base is probably the best-known US military base in Europe. It is from here that the US coordinates its drone strikes in Africa and the Middle East. Speaking to Sputnik, former Bundeswehr Air Force officer Jochen Scholz emphasized that America's use of the German base for its drone strikes is illegal under international law.

Earlier this summer, some 5,000 Germans protested outside the base, which serves as the European center of the US drone program. A satellite relay station at Ramstein, located close to the southwestern German city of Kaiserslautern, is used to transmit information between drones operating in the Middle East and North Africa and their operators in the US.

Speaking to Sputnik Deutschland, Jochen Scholz, a retired Air Force Lieut. Col. with many years of experience in various NATO bodies and the German Ministry of Defense, expressed his disdain for the continued US presence at the base, and added that if Berlin had any measure of political will, it would at least close down the US drone program operating out of the country.

© AFP 2020 / ALBERTO PIZZOLI
German Gov't Approves Military Engagement in New NATO Mission in Mediterranean
Ramstein, Scholz recalled, is a quintessential product of America's post-WWII defense posture, with the US "securing their 'second shore' in Europe against an enemy from the same continent – the Soviet Union. This was the basic idea behind NATO," and its guiding logic during the 40 year Cold War confrontation between the US and the USSR.

However, the officer noted, when the Cold War ended, in spite of the signing of the 1990 Charter of Paris for a New Europe, which included the Soviet Union and all members of the OSCE, Western politicians "changed their minds, and canceled the adoption of a general Eurasian security space, as agreed to in Paris, in favor of a different strategy."

"This, Scholz explained, "resulted, among other things, in NATO's eastward expansion, bringing the alliance up to Russia's borders." Now, due to the worsening of relations between Russia and NATO over the past two years, NATO's presence in Eastern Europe has grown. "Romania, Bulgaria and Poland now station components of [US] missile defense, and in my view, the stationing of individual NATO battalions in the Baltic countries is only the first step" (to further expansion).

NATO's eastward expansion also helps to explain why US troops are still stationed in Germany, the analyst noted. "It is from here that it is possible [for the US] to carry out large-scale operations in the east and southeast. Let me remind you that during the 2003 Iraq War, the US conducted air attacks against the country from bases such as Spangdahlem and Eifel – in other words, from German soil."

© CC0
North-South Divide, East-West Split: EU Tensions Rising Over Key Issues
As for the relay station at Ramstein which is being used to operate drones in the Middle East and North Africa, this station too is essential for the US, given geography and the curvature of the earth, the officer said.

In Scholz's view, US drone operations in and of themselves are "a clear violation of international law, since they take place in countries with which the United States is not officially at war, and the killings take place extra-judicially."

As for Germany's involvement in the drone operations via the provision of its bases, the military expert suggested that they effectively share the US status in violating international law, even if "our federal government has yet to interfere in the process, and behaves more like the famous three monkeys" (who see no evil, hear no evil and speak no evil).

Naturally, the military expert noted, Berlin has the technical and legal capability to change its policy, especially given that US air bases on German territory are not US extraterritorial zones, but regulated according to bilateral treaties.  This is especially true given that Germany pays part of the funding required for the upkeep of US bases on its soil.

Unfortunately, Scholz explained, "to date there has been no political will or even the possibility – due to American pressure, to put an end to the US deployment."

© AFP 2020 / TOBIAS SCHWARZ
Three Syrians Detained in Germany Part of Daesh ‘Sleeper Cell’
Asked whether US bases in Europe would really protect the continent in the event of hypothetical attack, say by Russia, Scholz emphasized that such a question is purely hypothetical, and borders on the absurd. "Russia would be betraying itself if it attacked EU members."

The bases "are being used by the US to intervene in every possible conflict in the Middle East." As for the idea that they are meant to ensure European security, "this is a concept intended for the public," the officer concluded.