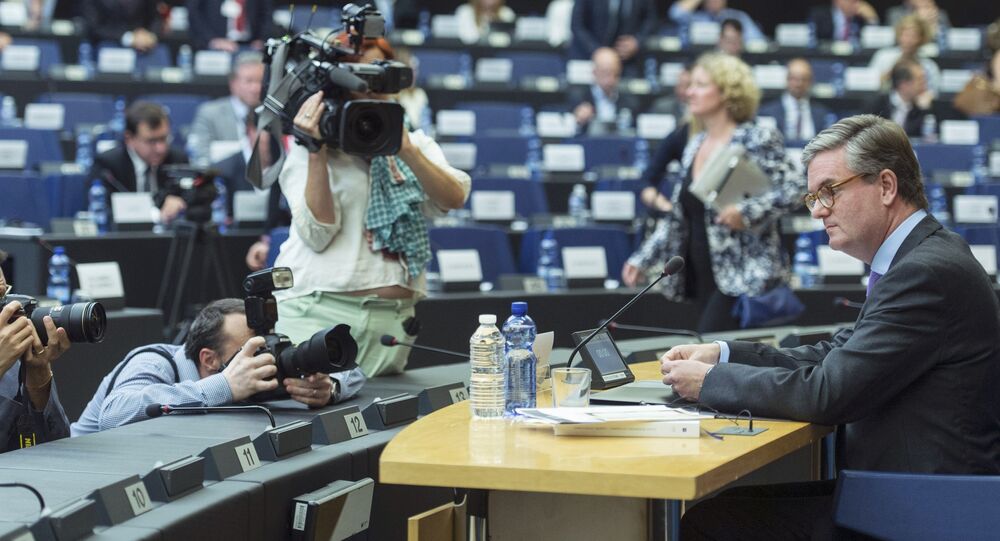 The upcoming appointment of British career diplomat Sir Julian King to the vital role of Commissioner for the Security Union spearheading a major shake-up in counterterrorism and security - despite Brexit - is significant, Sputnik has been told, as the UK is a world leader in intelligence-sharing.

© AFP 2020 / Thomas Samson
EU to Give UK Commissioner Crucial Security Role Ahead of Brexit
Rumors had been going round Brussels that the next UK commissioner — taking over from Lord (Jonathan) Hill, who resigned following the June 23 referendum which saw Britain vote to leave the EU — would be seen as a lame duck and appointed as "head of paperclips."

Instead, it came as a surprise when European Commission President Jean-Claude Juncker announced that King would head-up the Security Union, spearheading the EU's efforts to improve cooperation between police and intelligence services in the face of Europe's growing terror threat.

"I think his appointment a very good, neutrally well-politically placed position, which allows Europe to feel in the post-Brexit wake that they are not losing a connect with our intelligence instruments or with our collaboration and assistance which is critical, because ultimately well all face the same threats. The more join-up and support that we can lend to our European cousins, the better," Will Geddes, a UK security expert with ICP Group told Sputnik.

© AP Photo / Christian Alminana
Greater EU Intel Sharing in Face of Daesh Threat 'Complicated' - Expert
British intelligence — because of its long history of dealing with the IRA and other groups in Northern Ireland, plus its experience of the 7/7 London bombings in 2005 — is deemed to be the best in the world and recent terror attacks on mainland Europe have exposed intelligence failures within the EU.

The joined-up communication and intel-sharing in the UK is in sharp contrast to the federalized and silo nature of many EU countries, which security experts say led to terrorists going untracked ahead of recent terrorist attacks in Europe.

"British intelligence networks — particularly the join-up between MI5 [domestic intelligence agency] and MI6 [foreign] in addition to the join-up between the various police agencies is a template admired by many across the world in terms of how they have set up their intelligence infrastructures. Are we the best in the world? Well, yes. Between us and the United States, we have the most admirable systems," Geddes told Sputnik.

Thank you. Looking forward to further discussions on this vitally important area. https://t.co/O75tZdFALy

​King's appointment has yet to be ratified, but he appeared before MEPs for a three-hour grilling, during which he said: "I have direct experience — not least from my time in the Political and Security Committee and on the ground in Ireland and Northern Ireland, and more recently in France. Two months ago, I was in Nice on the morning of 15 July and saw for myself the devastating aftermath of the attack the night before — which killed so many people, injured many more and traumatized Europe. It brought home to me again the true human cost of terrorism."

​After appearing before MEPs, September 12, Timothy Kirkhope, group leader of the Conservatives and Reformists said:

"It's clear that being the UK Commissioner will not be a walk in the park, but Sir Julian was right to say that the UK has played, and will continue to play, a major role in European security and intelligence cooperation even after we leave the EU."