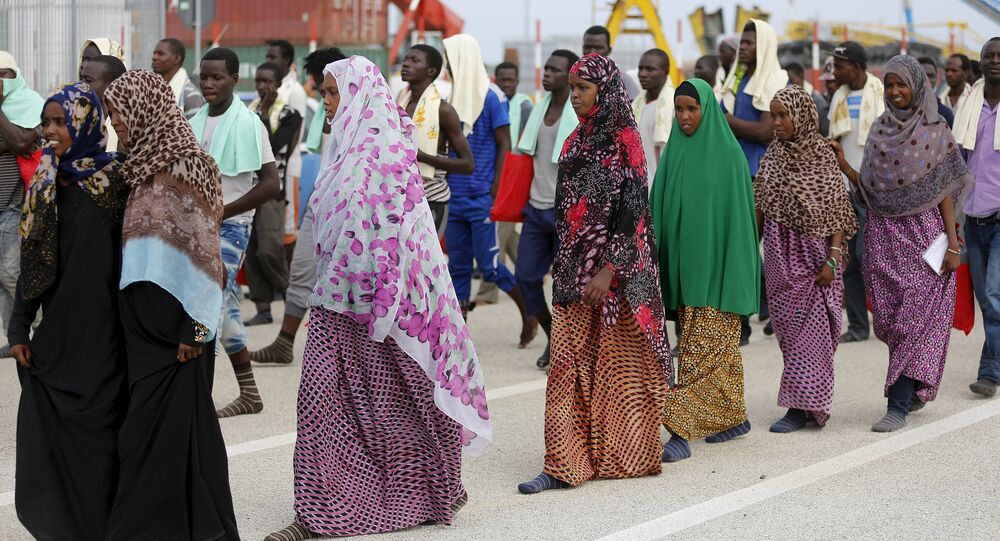 A new formula proposed by the Interior Minister Angelino Alfano will distribute 2.5 migrants per every thousand citizens, putting local mayors in charge of settling them, however this responsibility may prove to be too much.

© REUTERS / Marina Militare
EU Border Agency Plans 'Stress Test' as Italy Sees Surge of Migrants
Alfano's plan provides the distribution only of those refugees who have filed a request for asylum, and in addition, it does not cover the coordination of their arrival with the local authorities.

Giuseppe Addabbo, the mayor of Molinara, a commune in Benevento province, told Sputnik Italy that he learned about the group of migrants sent to his city from newspapers:

"Migrants should be allocated based on the number of urban residents. While there are 1,500 people living in Molinara, 25 women from Nigeria and Somalia were brought to us through a private organization associated with the Red Cross. Nobody — neither the Red Cross, nor this structure itself, nor the prefecture of the province — have coordinated their arrival and accommodation with city authorities. I have learned this news from the morning press!"

Number of Migrants Arriving in Italy Rises by 12% in July
The mayor believes that such methods only create confusion and scare the citizens, who will turn to the authorities of the city in case of any problems.

"I call it a 'vicious circle for the authorities,' and it needs to be torn up. We need to be informed in due time about the intentions of the central authorities and regional prefectures. Otherwise, mayors face the decisions that are imposed on them and for which they are responsible to the citizens," he said.

"The Centre should not create problems for us. Otherwise, the existing disarrangement will remain the same," Giuseppe Addabbo concluded.