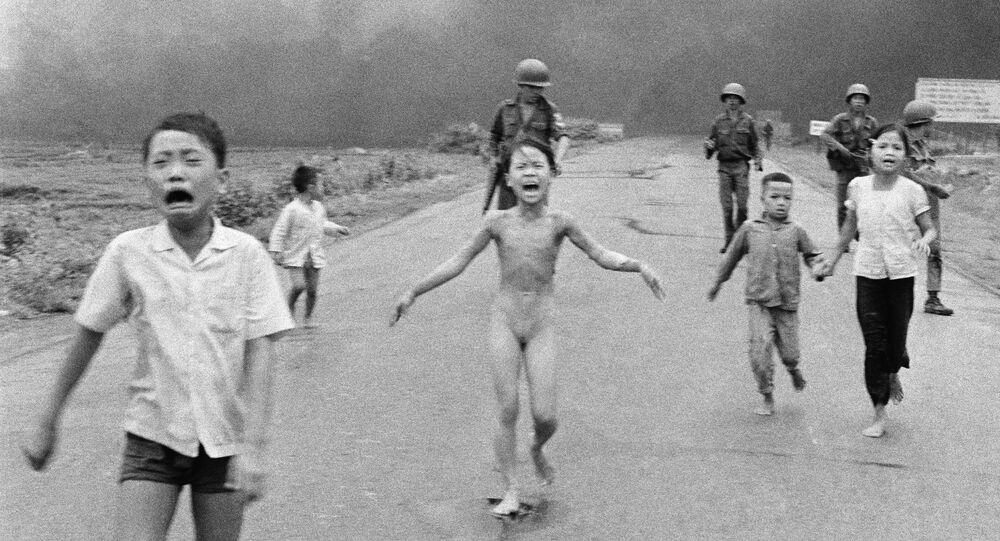 Facebook has been under fire in Norway for censoring the Pulitzer Prize-winning ‘Napalm Girl’ war photograph in posts by a well-known Norwegian author and news editor. The horror engendered by the photograph, taken during the Vietnam War, is believed to have significantly contributed to ending the 20-year conflict.

Two weeks ago journalist and author Tom Egeland posted the photo, and it was quickly taken down by Facebook, in accordance with what it terms "community standards." The photograph, taken by AP photographer Nick Ut in 1972, that instantly became an iconic depiction of the Vietnam War, showed injured Vietnamese children running from a napalm attack. Among the children and South Vietnamese soldiers in the image, a severely injured and naked 9-year-old girl, Kim Phuc, is at the center, and it is her nudity that is the stated reason for the ban. "Any photographs of people displaying fully nude genitalia or buttocks, or fully nude female breast, will be removed," according to Facebook policy.

#NapalmGirl picture gives a face to the horrors of war and should NOT be censored. War isnt pretty

Facebook removes iconic image of girl fleeing Napalm attack during Vietnam war from a post on grounds of nudity. pic.twitter.com/4JcHruB0ez

© Fotobank.ru/Getty Images
US Rewriting History of Vietnam War, a Genocide of 3.8 Million
That incidence of censorship has been strongly criticized by Norwegian users. Many reposted the photo, protesting what they see as censorship. The Norwegian Journalism Association joined the protest, encouraging other media outlets to do the same. The social network continued to delete the image.

Norway's largest newspaper, Aftenposten, published an open letter to Mark Zuckerberg on its front page, accusing him of an abuse of power in his use of a global information distribution platform. Editor-in-chief Espen Egil Hansen wrote, "First you create rules that don't distinguish between child pornography and famous war photographs. Then you practice these rules without allowing space for good judgement."

Just a reminder: Facebook is not mandatory. I've never had it & never will. Maybe if u ppl delete ur accts Zuck w/care. Naww. #NapalmGirl

Norwegian newspaper Dagsavisen contacted the Kim Phuc Foundation, founded by the former war victim in 1997 for helping children suffering in war. A foundation spokesperson told Dagsavisen, "Kim is saddened by those who would focus on the nudity in the historic picture rather than the powerful message it conveys. She fully supports the documentary image taken by Nick Ut as a moment of truth that captures the horror of war and its effects on innocent victims."

© AFP 2021 / ODD ANDERSEN
Nudity Detected: Facebook Bans Picture of Danish Mermaid Statue for Being 'Too Sexual'
On June 8, 1972, after South Vietnamese aircraft supported by the US dropped napalm bombs on her town, nine-year-old Kim Phuc, and many others, including children, were hit by the burning substance. Kim ran in terror, ripping off her burning clothes. The picture depicts a moment when she is running, screaming in her native language, "Too hot, too hot!" The photograph was published in the New York Times and won the Pulitzer Prize.

Ut said of the photograph, "It changed the war. I met so many American soldiers who said, ‘Nicky because of your picture I'll get to go home early.'"