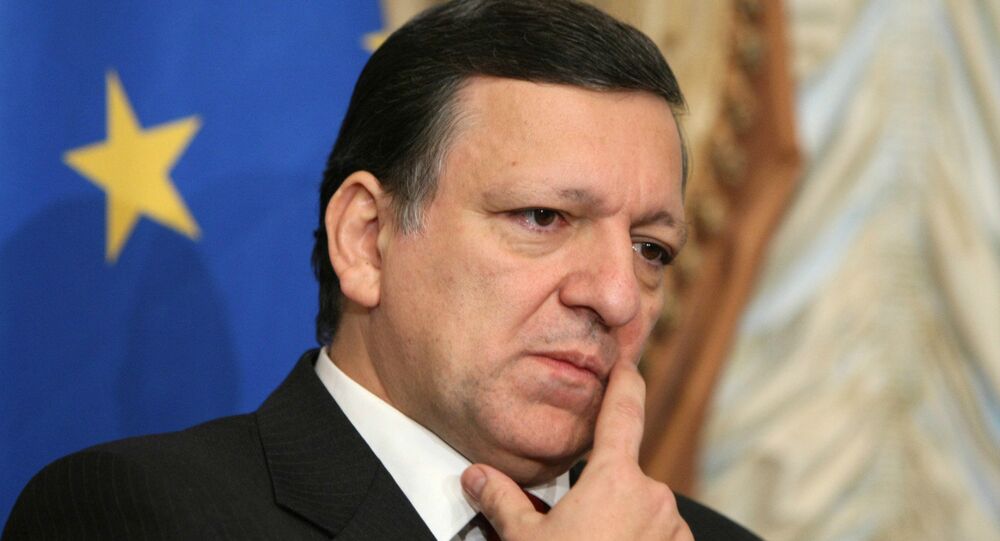 In July, former European Commission (EC) president Jose Manuel Barroso took on a senior position with the US investment bank Goldman Sachs, promoting calls for him to be stripped of his EC pension.

Let's start with Greece, where perhaps more than any other country in Europe, pensions are a very sore point; they became one when Athens agreed to slash pensions and cut public spending to keep the Troika and EU bosses happy.

This was not a popular move in already austerity-hit Greece, prompting protests and road blocks around the country, since people had voted overwhelmingly against any further austerity measures imposed by the government.

Turning the clock back to when Greece joined the Eurozone in 2001, many claim the only reason sure it qualified for the Eurozone, was because US investment bank Goldman Sachs massaged Greece's accounts and hid a lot of the country's debt.

In an interview with Sputnik at the height of the financial crisis in Greece in 2015, Alexander Douglas, lecturer in the philosophy of economics at University of London, said Greece's debt is "morally and politically different," to other debt laden countries.

"In financial terms, the Greek debt is unpayable….unpayable debts are usually generated through financial fraud, overrating the creditworthiness of borrowers. In most nations, the fraud was perpetrated by the private banks, who were lending to non-creditworthy borrowers."

"When the [Greek] banks had to be bailed out, the bad liabilities ended up on the government's balance sheet, the difference with Greece is that the government was in on the fraud — fiddling the books with the help of Goldman Sachs in order to hide a lot of debt and qualify for the euro," said Douglas.

But why mention this now, well the issue of pensions, the EU and Goldman Sachs has reared its head again. This time it's included in a petition calling for former European Commission (EC) president and Portuguese politician Jose Manuel Barroso to be stripped of his EC pension following his appointment as chairman of Goldman Sachs, "one of the worst banks in the 2008 economic crisis," the petition begins:

"Barroso will know which strings to pull inside the European Commission."

"Barroso, don't sell our public interest to Goldman Sachs," the petition requests in its call for public officials to be prohibited from using "their contacts and influence for powerful corporations."

"Stop this revolving door between the European Commission and big business," it states, suggesting that former commissioners should be "banned for at least three years from any job that provokes a conflict of interest, including all direct and indirect EU lobbying."

"In this spirit, Barroso should have his commission pension entitlements removed."

Alongside the calls for Barroso to be stripped of his EC pension's entitlements, an EU official ombudsman has written to President Jean Claude Juncker also questioning the EC's ethical standards over the role of former EC president Barroso at US investment bank Goldman Sachs ahead of tense talks surrounding the UK's withdrawal from the EU.

Emily O'Reilly told Mr. Juncker: "Public unease will be exacerbated by the fact that Mr.Barroso has publicly stated that he will be advising on the UK's decision to leave the EU. In this context, has the Commission considered issuing guidance to current members, to chief negotiator Barnier and to staff in relation to how and whether they will engage with the former commission president in his new role?" O'Reilly asks.

Looks like our former President of the Commission, Jose Manuel Barroso, is having troubles! The EU Onbudsman is… https://t.co/Ox2FDQxc2i

​"Such advice is important given the need to ensure that their work is not affected by any possible failure on Mr. Barroso's part to comply with his duty to act with integrity."

In his role of chairman of Goldman Sachs, Barroso will help the bank deal with the impact of Brexit. He respected the EU mandatory 18 month cooling off period before moving into the role, nevertheless, Barroso will be involved in the crucial discussions to determine the UK's terms for exiting the EU.

​The petition launched by transparency campaigners calling for Mr. Barroso to lose his Commission pension has gathered more than 60,000 signatures.

Meanwhile, Greek pensioners took their plight to the streets once again in protest of the latest round of cuts to their pension entitlements in Athens. In some cases, pensions have been slashed by more than 50 percent.