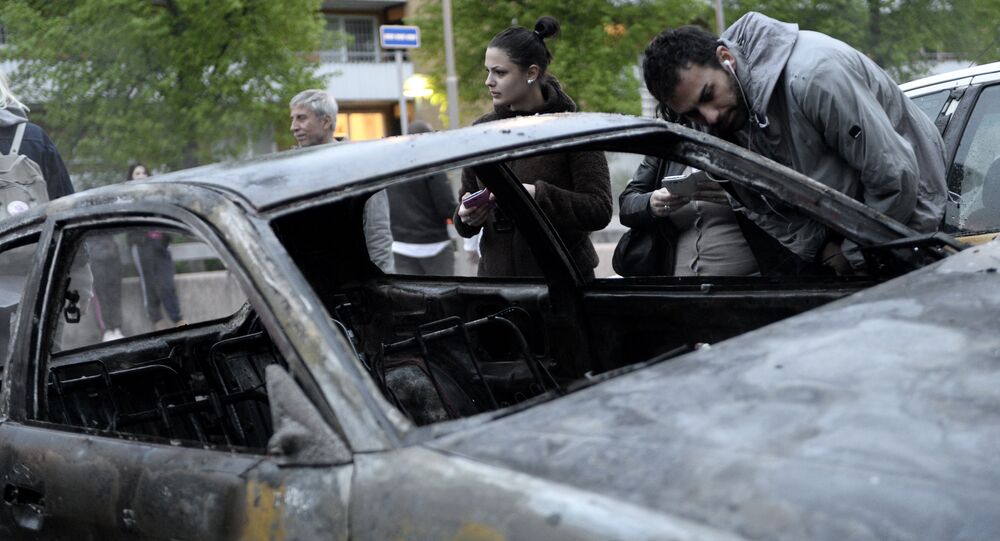 In Sweden, the beginning of autumn was marked by a rash of urban violence in troubled so-called "exclusion areas." The recent anti-police riots in Trollhättan, together with an alarming number of car arsons across the country and police inactivity, have spurred even the most patient Swedes into taking action.

© AFP 2021 / JONATHAN NACKSTRAND
Sweden is on Fire: Car Arson Epidemic is Catching
According to Sweden's Crime Prevention Council (Brå), over 2,000 cars were set alight during the first half of the year. Last weekend, 17 cars were torched in the city of Västerås alone. For city dweller Kristian Howes, this was the last straw. The active citizen started a Facebook group to gather volunteers in order to patrol the community on evenings and weekends, in a bid to prevent further car fires.

"In the last two years, I have personally seen up to eight car fires. Frankly speaking, I myself have been waiting for someone to do what I'm doing now. But since nothing has happened so far, I decided to go for it myself," Christian Howes told SVT.

His effort was hailed by police, who have been criticized for being inept and failing to prevent the car arson epidemic. Police officer Per Agren told Swedish national broadcaster SVT that it was important for the public to get involved and for alert adults in the community to stand up. Although Kristian is a trained guard, he pointed out that vigilantes should not engage in police work, but instead aim at preventive efforts. At the same time, Howes has been procuring fire extinguishers for guards to be able to use, despite calls for caution from the Rescue Service.

​"Preventing and hopefully scaring off, that's our mission. Ideally, we hope to scare them off, so that perpetrators know that we are out there. The perpetrators have been careful not to attract any witnesses, so the idea that we out are there might discourage them," Howes explained.

© Flickr / Nick Fisher
Swedish Summer Heats Up as Car Arson Trend Catches Fire
The recent wave of civil unrest and vandalism culminated in the riots in Trollhättan, where some 60 masked men caused considerable unrest by burning tires and throwing stones at police officers for several days in a row. Previously, the metropolitan areas of Malmö, Stockholm and Göteborg were hit by a series of vehicular arsons which damaged hundreds of cars. What the arsons have in common is that they mostly occur in blighted immigrant districts, which have been informally identified as "no-go zones" and where police have little, if any, authority. Despite the incessant media attention, only isolated cases of car arsons have led to arrest.

In the city of Södertälje, which has a mere 75,000 inhabitants and is located 30 kilometers southwest of Stockholm, a record 150 cars were torched this year. As in the rest of the country, police have trouble finding witnesses. The breadth and random pattern of the arsons has left officials, citizens and the media scratching their heads.

"It's a frustrating situation, in that we have significant problems with this particular type of crime. Our actions and measures simply do not lead to the desired result," police officer Peter Nylind told the tabloid newspaper Expressen.

"We must show that the law is unjust, that it splits families and makes people insecure and afraid," Rasha Daoud, coordinator of the demonstration, said, as quoted by Swedish Radio.

Luckily, no cars were torched that time.