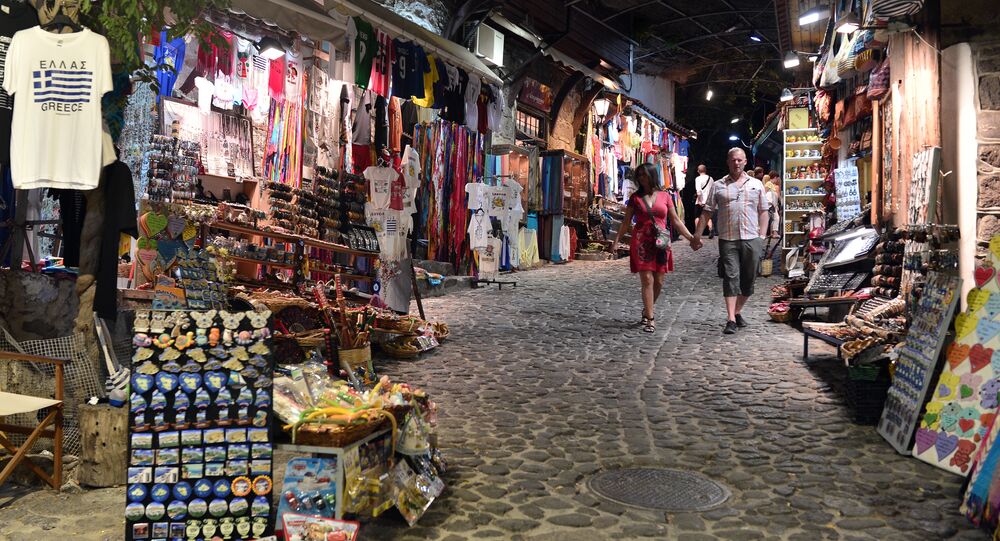 The ongoing migrant crisis in Europe is taking its toll on the tourism industry of the Greek island of Lesbos, posing a serious threat to the local residents' livelihood.

© REUTERS / Giorgos Moutafis
Migrant Crisis: Germany Plans to Flood Greece With Unwanted Refugees
When waves of refugees started arriving in Lesbos in 2015, at first there were no humanitarian organizations or volunteer groups there to accommodate them. The locals, however, helped provide thousands of displaced people with food, water, clothing and shelter.

However, this influx of refugees took its toll on the local tourism industry. Skala Kallonis, a hotel manager, told Sputnik that the number of tourists arriving at the island decreased by 70-80 percent.

Yorgo, a resident of the village of Molyvos who runs a scooter rental service for tourists, said that his neighbor was forced to close down his store and seek a job in Germany.

"His business was struggling and eventually he was unable to make ends meet.  Truth be told though, I’m not faring much better that him. I own 55 scooters, but only 15 of them are on display. Some days I don’t even get any clients at all, and I still have to pay the rent," he lamented.

Yorgo also added that he used to rent several rooms to tourists, but this year many of his regular customers said they’d rather visit the islands untouched by the flow of refugees.

"The problem is, the situation on Lesbos has changed for the better since last year, but the media keeps using the photos and footages from back then in their publications, thus doing us a lot of harm," he said.

Many of the island’s residents are also outraged by the fact that journalists who visit Lesbos to write a story or make a report about the refugees often tend to ignore the real state of affairs because apparently negative information is 'more attractive' to the readership.

"When the surge of refugees started, we did our best to accommodate them and to help them continue their journey. When spring came, the island’s residents made a considerable effort to clean the coastline of boat wreckages and life jackets that the migrants used to get here. But no one heard about it, no one published the photos of cleared beaches. We need someone to finally tell the world that things got back to normal on the island," a local resident named Ellen Afratoglu told Sputnik.

Yorgos, a guard working at a local International Rescue Committee camp, explained that the vast majority of island’s residents work in tourism industry, and that the current situation left a serious impact on their livelihood.

"They work for six months during the high tourist season, and live off the money they made for the rest of the year. This year however things are pretty bleak, and I doubt that anyone has enough money to last the next six months," he said.

He also pointed out that while the islands that weren’t affected by the migrant crisis continue to develop their tourism industry, the residents of Lesbos are forced to seek employment in Germany in order to feed their families. Nevertheless, if another wave of refugees does arrive at the island, the locals stand ready to do the same thing they did in 2015.

"We feel proud of each other, we managed to unite and help these people. We did what had to be done. And if Turkey breaks the agreement and another wave of refugees comes to Lesbos, we’ll do it again. We regret nothing, but we are saddened by the fact that instead of receiving the support we were hoping for, we were left on our own," Yorgos said.