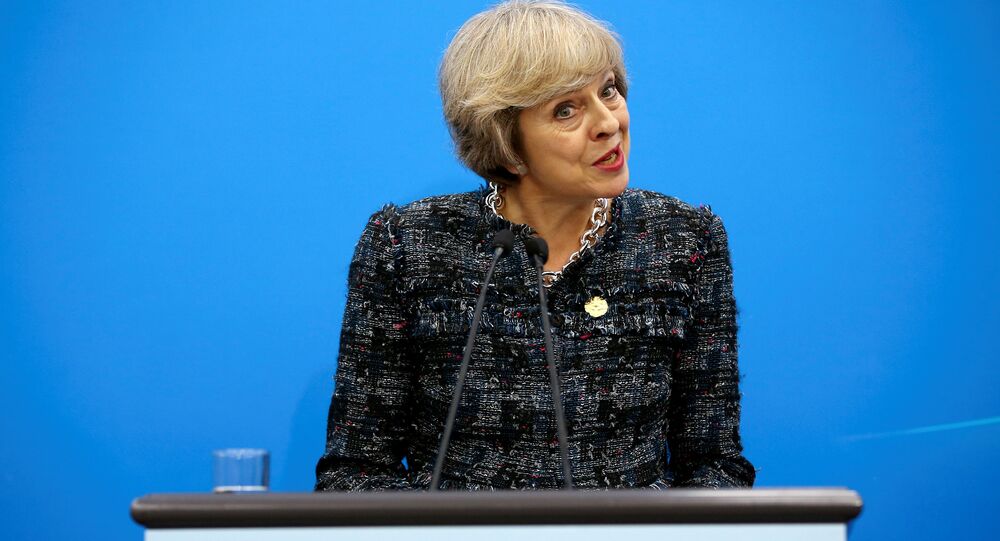 UK Prime Minister Theresa May has denounced her own Brexit minister's comments about the direction of the UK's EU-exit negotiations, in the latest embarrassing revelation of fundamental disagreement at the heart of her government.

When the British public went to the polls on June 23 and voted to leave the European Union, they were promised decisive action on "taking back control" over the UK's future.

However, as the weeks have stretched into months, the official government response on how to actually go about leaving the EU bloc has been anything but decisive.

On Tuesday this week, the Brexit minister David Davis, sought to reassure frustrated members of the public that the government did indeed have a plan. In a statement to Parliament, he said that a new economic agreement would be negotiated as it is "a simple truth" that it is "very improbable" that the UK will remain a member of the EU single market.

However, less than 24 hours later, Theresa May, after flying back from the G20 summit in China, publicly denounced her own minister, a man she herself chose to help lead the UK's Brexit negotiations.

In an embarrassing about-face, she insisted that she has made no such decision on whether she believes the UK should press to remain a part of the EU single market, a lucrative customs union that allows the freedom of movement of goods and services without any regulatory obstacles.

"We will not take decisions until we are ready. We will not reveal our hand prematurely and we will not provide a running commentary on every twist and turn of the negotiations," May said.

May spoke at length during Wednesday's Prime Minister's Questions and a subsequent Brexit statement in Parliament: however, little was forthcoming on any specific details.

It left opponents noisily deriding her and her government, with many MPs accusing the Prime Minister of either not having a plan, or of deliberately deceiving the public.

Angus Robertson, the Scottish National Party's leader at Westminster, accused May of wasting the public's time.

"So may I ask the Prime Minster a very simple question, but it's quite important, does she want the UK to remain fully with the European single market?"

"What I want for the UK is that we put into practice the vote that was taken by the people of the United Kingdom to leave the European Union."

Robertson would not be deterred, repeating his demand for an answer.

"And I asked the prime minster a very, very simple question, and it's either an 'in' or an 'out' answer, so let me ask it again… Does she want the UK to remain fully part of the European single market: yes or no?" Robertson said.

But to no avail, the Prime Minister continued to resist calls for a direct answer on the matter, to loud howls of disapproval across the Commons.

May's public disavowal of her Brexit minister is particularly damning as it was David Davis' first statement to the Commons as Brexit minister, and he had been seeking to provide "clarity."

It is also the latest indication of deep divisions in the Prime Minister's cabinet over what direction the government should be leading the country in.

Wednesday's comments by May, that she is in no hurry to reveal what her true intentions are, will do little to assuage the nervousness of UK businesses or EU country leaders.

Many UK businesses are seriously concerned that they will lose their access to the EU single market.

Meanwhile, several EU leaders have said that Britain will have no choice but to accept freedom of movement rules if it wants to remain a part of the single market after Brexit. This would prove very problematic for May's government, as a backlash against current EU immigration policies was widely considered to be a major factor for Brits who voted to leave the EU in the first place.

May is seeking to paint her reluctance to divulge the details of her official position as canny negotiating. However, several of her own senior cabinet colleagues are seemingly quite eager to publicly put pressure on her to announce specific Brexit policy positions, including former Conservative party leader Iain Duncan Smith, and Liam Fox, May's minister for International Trade. As a result, her stand looks less pragmatic, and more defensive.

Brilliant Vote Leave Watch patron @EmmaReynoldsMP points out that May is breaking promises made by Davis, Boris & Liam Fox #LeaveWatch

The longer the uncertainty swirls around Westminster, the more fractured her cabinet appears. It's likely that she will continue to be beset from all sides to reveal her hand — by her opponents on the opposition benches, as well as by her own cabinet colleagues.

When May became prime minster in July, she told Brits that "Brexit means Brexit." They may have to wait some time before anyone has any real idea what that will actually mean.

'Invoke Article 50 or Else!' Brexit Campaigners Call for Britain to Leave EU