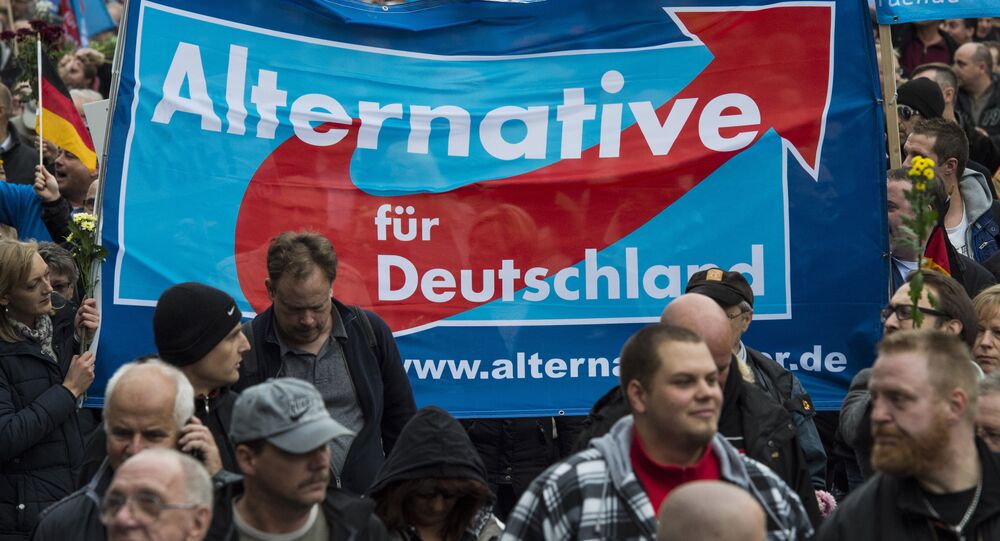 The right-wing Alternative for Germany has a realistic chance of success in German federal elections next year, but the current coalition government will likely continue, political analyst Alastair Newton told Radio Sputnik.

​The chancellor's party, which governs Germany in coalition with the Social Democratic Party (SPD) and its Bavaria-based sister party, the Christian Social Union (CSU), came in third place in the elections.

"Today is probably the beginning of the end of Angela's Merkel's chancellorship," commented Leif-Erik Holm, a leading AfD candidate for the regional parliament in Mecklenburg-Vorpommern.

"The SPD actually did better than expected. That could be because a week before the election SPD leader and Vice-Chancellor Sigmar Gabriel actually broke ranks with Merkel and moved his party towards a more anti-immigrant stance than was previously the case," Newton explained.

Newton said that with federal elections set to take place next autumn, the SPD is seeking to differentiate itself from its coalition partners.

The right-wing AfD was formed in 2013 in the aftermath of the European debt crisis. The Eurosceptic party opposed the bailout deal which EU creditors struck with Greece, and opposes the open-border policy espoused by the EU and Angela Merkel.

© AFP 2021 / Odd Andersen
Germany's State Elections Signal Rise of Germany's Right Wing AfD
It currently has no seats in the federal parliament but made significant gains in regional elections held in three German states in March this year. In one, Saxony-Anhalt, the party received 25 percent of the vote.

The AfD's performance in Germany's next regional elections, held in Berlin on September 18, could be another indicator of its fortunes in next year's federal election. In Berlin's last state election in 2011 the SPD won almost one-third of seats, followed by the CDU and the Greens.

Newton said that "it would be a major surprise if AfD did not win seats in the Bundestag," but that the party is nevertheless unlikely to be given a role in the government of Germany.

"The net consequence of that is still most likely to be a CDU-led grand coalition with the SPD."