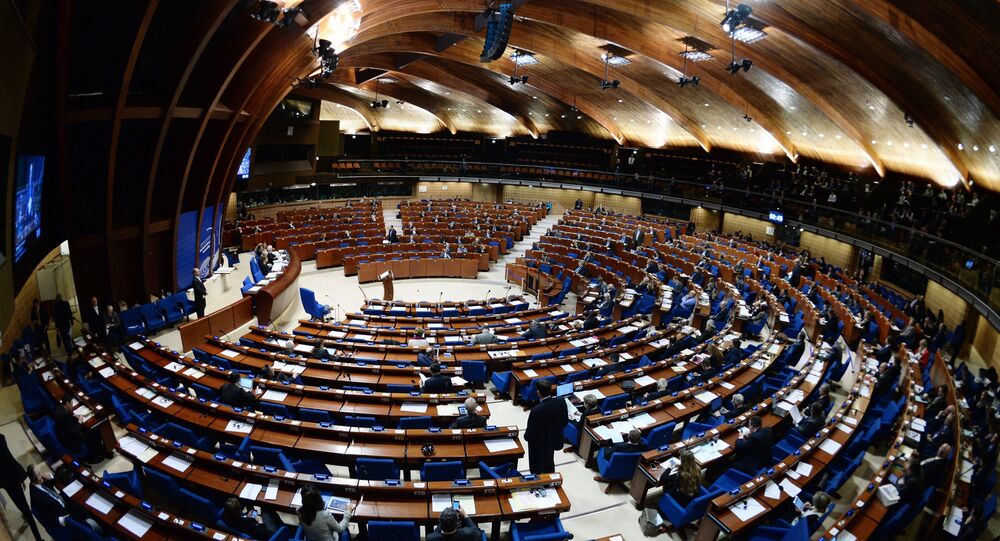 Tiny Kox, a member of the Parliamentary Assembly of the Council of Europe (PACE) Presidential Committee said that there will be no restrictions and formal opposition for Russia to return to PACE’s sessions.

© Flickr / Partido Popular Comunitat Valenciana
Current State of PACE-Russia Relations Benefit Neither Party
MOSCOW (Sputnik) — All members of the Parliamentary Assembly of the Council of Europe (PACE) Presidential Committee are set to restore ties with Russia and bring it back to the work of the body, Tiny Kox, a member of the committee, told Sputnik Tuesday.

"All colleagues of the Presidential Committee, they do agree that we should do our utmost to have Russia back in the Assembly," Kox, the chairperson of PACE Group of the Unified European Left, who is currently in Moscow, along with other members of the Assembly’s political groups, said.

He added that recent reshuffles in the committee, such as the appointment of Assembly President Pedro Agramunt in January, as well as the nomination of Ian Liddell-Grainger and Michele Nicoletti as leaders of European Conservative and Socialist groups, respectively, made it easier for the Assembly to reset relations with Russia.

There will be no restrictions and formal opposition for Russia to return to PACE’s sessions, he noted.

"When it [Russia] will present its new credentials next year then it will all be open… Formally, there are no limits to Russia’s participation [in the Assembly]… Comeback of Russia is not that problematic anymore," Kox stressed, adding that national delegations could present certain recommendations for Russia’s participation, as Ukraine, Georgia and the Baltic States had done previously, but these countries would be in the minority.

Representatives of all five political groups of the Assembly are currently in Moscow to carry out talks with senior legislators of the State Duma, the lower house of parliament, and members of the Russian delegation to PACE.

A PACE resolution in April 2014 deprived the Russian delegation of its voting rights, in response to Crimea rejoining Russia. Russian lawmakers were barred from participating in PACE's three key bodies — its Bureau, Presidential Committee and Standing Committee.

Russia did not renew its credentials ahead of the Parliamentary Assembly’s 2016 winter session and made its return conditional to the restoration of its delegates' rights to vote and participate in PACE institutions.

Tiny Kox also stated that the Russian government’s stance on not inviting the Parliamentary Assembly of the Council of Europe (PACE) to observe upcoming elections to the State Duma, the lower house of parliament, is a mistake.

In June, Duma speaker Sergei Naryshkin ruled out PACE’s participation in the Russian parliamentary elections on September 18 after the deprivation of the Russian PACE delegation of its rights to vote.

"We are now within two weeks to the [Russian parliamentary] elections, so I think it was a mistake of the Russian parliament not to invite us… it is a pity that we are not here to observe these elections," Kox, who is also the Assembly Presidential Committee’s member and part of PACE delegation that arrived in Moscow to carry out talks with senior legislators of the State Duma, said.

He added that the positive outcome of Wednesday’s meeting of the PACE Presidential Committee members with Naryshkin in the Russian capital, would not make it possible for PACE pre-electoral and observation commissions to observe the Duma elections on such short notice.

In 2014 and 2015, PACE suspended the Russian delegation's right to vote at Assembly's sessions in response to Crimea's incorporation into Russia. Russia did not renew its credentials ahead of the Parliamentary Assembly’s 2016 winter session and made its return conditional to the restoration of its delegates' rights to vote and participate in PACE institutions.

PACE Should Not Have Mandate to Ban National Delegations - Russian Lawmaker