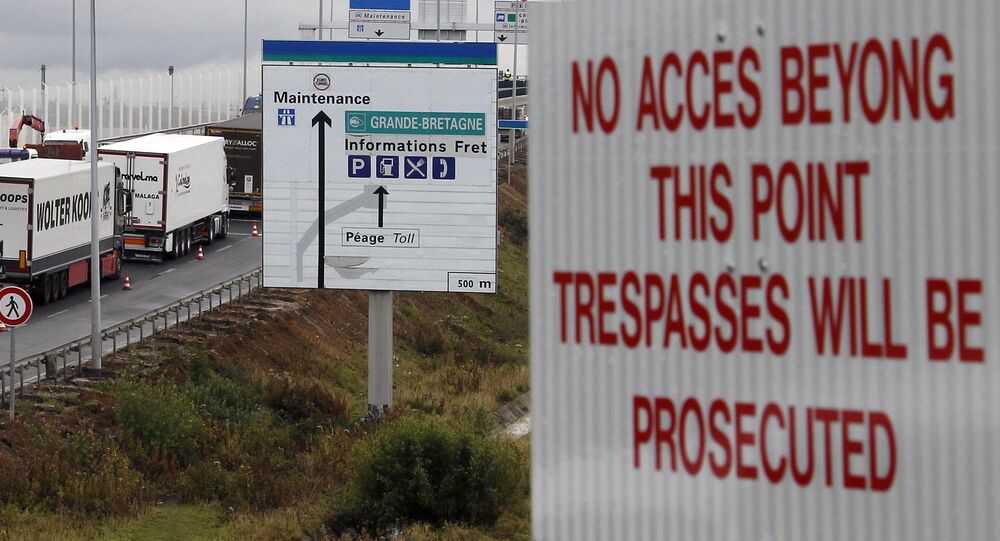 On France’s A16 motorway, traffic is blocked between Boulogne-sur-Mer and Dunkerque. Hundreds of truckers and farmers, as well as dock workers, hunters and residents of Calais held a "snail" operation to draw attention to the problem of the deteriorating economic and security situation in the region.

The situation is "really explosive," especially near the road that runs around the city, at the entrance to the Channel Tunnel, in the port area and near the refugee camp called the "Jungle," where the number of inhabitants reached record numbers. Sputnik spoke to the organizers and participants of the demonstration.

"A minister announced plans to demolish the 'Jungle.' What we require is mainly to ensure the safety of our drivers, our cars and our cargo on the circular road and the A16 motorway between the port and the tunnel," said Sébastien Rivéra, the General Secretary of the National Federation of Road Transport (Fédération nationale des transports routiers, FNDR) in the department of Pas-de-Calais.

© AFP 2020 / Charles Platiau
Calais Go-Slow Protest at 'Stale Mate' Over Demands Migrant Camp Must Shut Down
"In our opinion, these statements do not meet the urgency of the situation and aggression suffered by our drivers."

For more than 20 years, truck drivers have put up with the presence of migrants, Rivéra explained. But over the last year there were too many incidents involving migrants.

"For already more than six months, migrant groups are continuously attacking on the circular road and the A16 at night. They make barriers on these roads [from] anything they are able to find. All this stuff is thrown across the road to stop the car traffic. As soon as a van stops, migrants threaten its driver to not move, and then they cut the canvas and climb inside hoping to hide among the cargo to move to England," Rivéra said.

There also have been cases when drivers were robbed, according to the FNDR General Secretary of Pas-de-Calais. During their attacks, migrants climb into cabins to steal wallets, mobile phones and documents.

"Such damage is too high itself, besides the main problem of the lack of security. We organized this demonstration because we are truly afraid that something terrible will happen. The situation is really explosive! Migrants are throwing stones even at the law enforcement forces. It's not good," claimed Rivéra.

© AFP 2020 / PHILIPPE HUGUEN
Trucks Block Highway Near Calais, France in Protest Against Jungle Migrant Camp
Mayor and Chairman of the communes' association in the Audruicq commune, Nicole Chevalier, also shared her point of view with Sputnik:

"Now, our association of communes is beginning to understand what impact this large flow of refugees has, accompanied by serious negative things: assaults and even murders on the territory of our settlements. That is why I obviously support this operation, for the sake of our communes and also for the drivers who work here."

"About two weeks ago, there were two incidents. The mayor of one of the communes told me that he received a call at 2 am: severe injuries were inflicted. The Mayor of Marck-en-Calaisis also appealed to me about a death, which occurred on the territory of his commune. That's why I'm here. The time to do something about this came long ago!" Nicole Chevalier concluded.