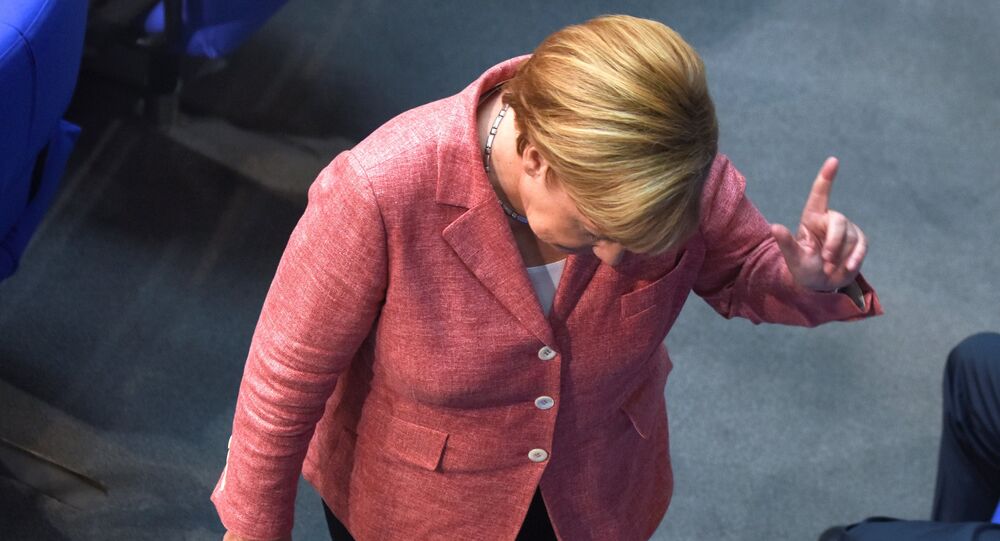 German Chancellor Angela Merkel has vowed to continue her migrant policy and win over opponents ahead of next year's federal election, despite rising opposition, but - although politically weakened - retaining strong support, Sputnik has been told.

​Despite the setback, Merkel said she would continue to pursue her policy on immigration, in spite of growing nationalism and demands for a cap on the number of migrants Germany will accept. She told reporters at the G20 summit in Hangzhou, China:

"I consider the fundamental decisions as right, but there is much to be done to win back trust and the topic of integration will play a huge role, as well as the repatriation of those who don't gain residency rights."

#Merkel Is Officially 'Establishment', Her CDU Party About To CRASH From Immigration Mess https://t.co/zf6jAxEaL9#DemExit

​Meanwhile, half of those polled for newspaper Welt am Sonntag said Merkel should not stand for a fourth consecutive term in next year's election. Her approval rating has sunk to a five-year-low, at 45 percent.

"She's not as strong as she was, but she still is immensely strong and broadly trusted within Germany That very much remains the case. She's the weakest she's been for five years but that's still not comparatively weak."

He told Sputnik, Merkel will probably stand for a fourth term at next year's federal election.

"There are no other viable successors to her within the Christian Democratic Party. Her party is still ahead in the polls despite the lessening of support for Merkel as an individual. She knows he coalition partners, the SPD, are not doing particularly well either. So, overall, she is still in a very strong position," Mr. Worth told Sputnik.

The main potential threat to her comes from the populist right-wing Alternative for Germany Party (AfD), which has seen its support rise enormously in recent months, — largely due to the migrant crisis, increasing Islamophobia and the fear of terrorism.

© AFP 2021 / Odd Andersen
(L to R)Chair of "Alternative for Germany" (AFD) in Lower Saxony Armin Paul Hampel,leader of the AFD Frauke Petry, top candidate for the AFD in Mecklenburg-Western Vorpommern Leif-Erik Holm and co-leader of AFD Joerg Meuthen arrive for a press conference in Berlin, on September 5, 2016.

"[The AfD] have concentrated — almost to the exclusion of all other themes — on immigration. Immigration as a sign of the perils of Europe, the perils of multiculturalism and the perils of globalization," ​Professor Charles Lees, from the Department of Politics, Languages & International Studies at the University of Bath, UK, told Sputnik.

Merkel now has until the fall of 2017 — when the federal election is due — to summon support for her migrant policy and use her strengths to win back support from within her own party as well as the electorate as a whole.