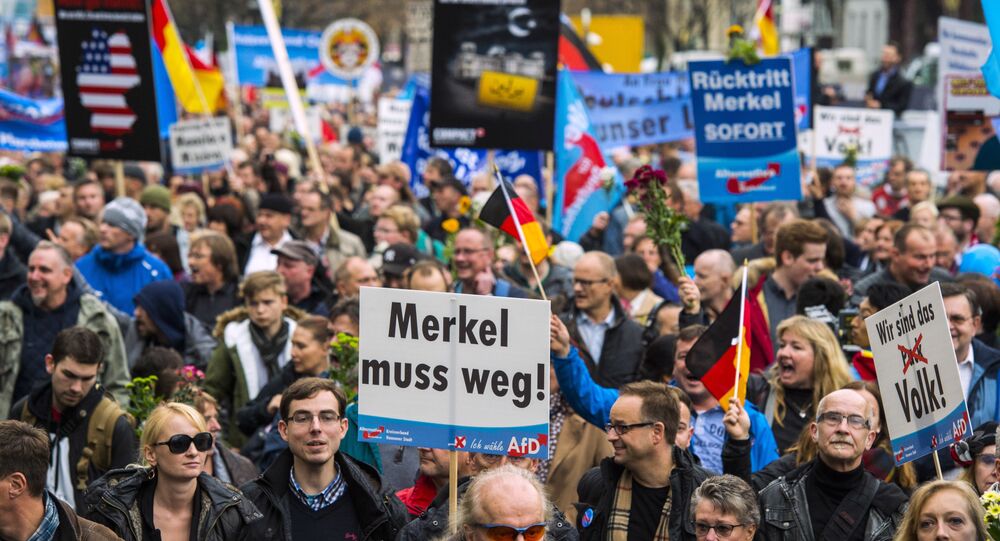 Markus Frohnmaier, the head of the Alternative for Germany (AfD) party said that the party was optimistic about the results it could achieve in Berlin, although he complained about attacks on AfD supporters by leftist activists.

© AP Photo / Markus Schreiber
More AfD Seats in State Parliaments Could Toughen German Migration Policy
MOSCOW (Sputnik) — With success in the recent local elections in a northeastern state and very likely to gain ground in the city-state of Berlin in a couple of weeks, the far-right party Alternative for Germany (AfD) is hopeful to lay a solid base for general elections in 2017 and become the second strongest political force in the future, the head of the AfD apparatus, Markus Frohnmaier, told Sputnik.

On Sunday, AfD clinched almost 21 percent in its first bid for seats in the regional parliament of Mecklenburg-Western Pomerania, which includes Chancellor Angela Merkel's constituency. The party finished second to the Social Democrats on 30 percent and beat Merkel's party Christian Democrats into third place with just 19 percent. On September 18, Berlin will also held local elections with expectations running high for further gains by the AfD.

"For me the question is not whether we will enter [the Berlin parliament], I wonder how strong we will be there. In the development of the political process in Germany, we can become the second strongest party in the country," Markus Frohnmaier, who also serves as spokesman for AfD leader Frauke Petri, said.

© AFP 2020 / ODD ANDERSEN
German AfD Party Expects Victory in Berlin State After Success in Merkel's Home District
Frohnmaier added that the party was optimistic about the results it could achieve in Berlin, although he complained about attacks on AfD supporters by leftist activists.

"Unfortunately, it is getting harder for our supporters in the capital to carry out an election campaign. Strong groups of left-wing extremists constantly attack us, destroying our posters. For this reason, I wouldn't expect the same result as in Mecklenburg-Western Pomerania. I think we will get some 14-16 percent [in Berlin], and I'll be very happy with such an outcome. Both victories will lay the groundwork for the federal elections to the Bundestag in 2017," the AfD spokesman asserted.

AfD was founded in February 2013 to protest against Germany’s handling of the eurozone crisis, in particular the decision to bail out Greece, but later on, following the migrants crisis in Europe, the party focused more on providing harsh opposition to Chancellor Merkel's liberal refugee policy and became well-known for its anti-Islam stance. Since 2013, and with its last success in Mecklenburg-Western Pomerania, the party has won seats in nine out of the 16 local parliaments across Germany.

The AfD's rise mirrors the success enjoyed by other anti-immigration parties across Europe, including the Freedom Party in Austria, the far-right Party for Freedom in the Netherlands and France's Front National, all riding high in the polls ahead of next year or 2018 general elections.