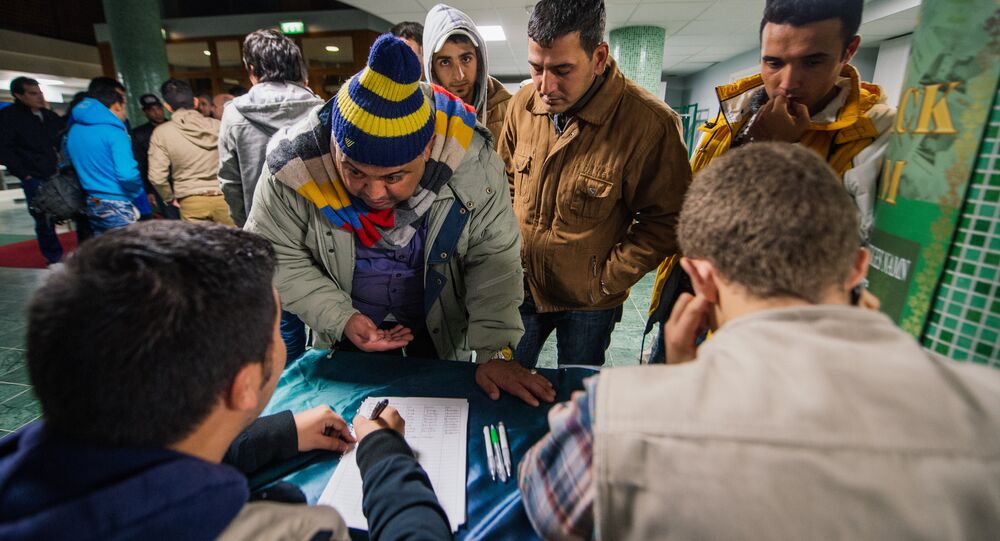 A female interpreter at the Swedish Migration Board has been suspended from duty and is awaiting an investigation for her 'inappropriate' comment that many Arabs "lie about their background" to secure asylum in Sweden.

© AFP 2021 / LOUISA GOULIAMAKI
Forever Young: Sweden Tussles With 'Refugee Children' in Their Thirties
The interpreter, who allegedly spoke disparagingly of Arabs during an interview with Syrian asylum-seekers in Örebro, Sweden, was suspended from duty, Swedish newspaper Dagens Nyheter reported. The woman reportedly welcomed the tightening of the Swedish asylum laws and said that Arabs who come to Sweden are lying and exaggerating about their backgrounds and personal histories in order to make it easier to obtain asylum and welfare bonuses.

The interpreter herself was reported to have a Christian Iraqi background. While tens of thousands of Christians have been enslaved by Daesh or forced to flee Northern Iraq and neighboring parts of Syria, they are commonly discriminated against by Muslim refugees.

She had responded negatively to a journalist's lament regarding the stricter asylum laws. She explained that "many" Arabs who come to Sweden lie and exaggerate how bad they had it in their home countries in order to more easily obtain asylum.

"Arabs do not have it that bad in their home countries. They can live anywhere, in Syria or any other Arab nation. Nobody forces them to come here," the female interpreter said, as quoted by Dagens Nyheter.

Now, the woman has been suspended from her job at the Migration Board, whereas the case itself has been reported to the Legal, Financial and Administrative Services Agency for ethical investigation.

© AFP 2021 / STIG-AKE JONSSON / TT NEWS AGENCY
Enough is Enough: Swedes Get Weary of Refugees
Last year, Sweden received a record 163,000 refugees, mostly from the Middle East and elsewhere in the Arab world. The migrants' most common countries of origin are, in decreasing sequence: Syria, Eritrea, Iraq, Afghanistan, Iran and Somalia, Sweden's Migration Board reported. Relative to its population of roughly 10 million, Sweden granted the highest number of asylums in Europe, taking in over 350 people per 100,000 inhabitants. Asylum-seekers are registered when they get a residency permit for at least 12 months.

Immigration to Sweden took off after World War II, when the Swedish economy was booming and there was a shortage of personnel in the Swedish industry. Until the 1970s, migrant laborers mostly came from countries with high unemployment, such as other Nordic nations and other European countries. After 1980s, Sweden intensified its humanitarian efforts and labor migration was slowly replaced by refugees and asylum-seekers.