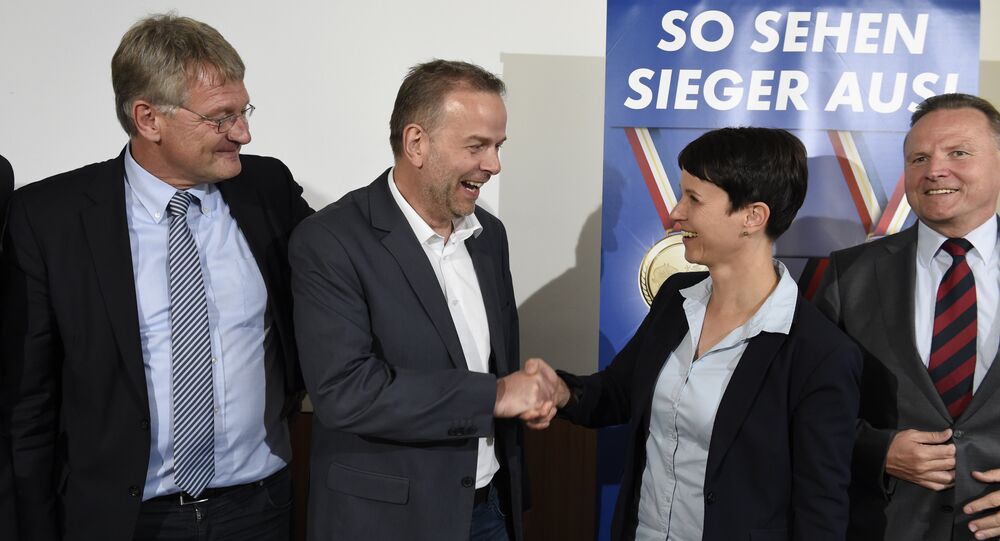 Ronald Glaeser, the spokesman of the AfD's Berlin branch stated that the victory of the far-right party Alternative for Germany (AfD) in elections in Berlin is "on the books."

© REUTERS / Jacky Naegelen
Le Pen Praises 'AfD Patriots' for Trouncing Merkel's Party in Local Elections
MOSCOW (Sputnik) — The performance of the far-right party Alternative for Germany (AfD) during the recent elections in German Chancellor Angela Merkel's constituency is "phenomenal" with expectations running high that this success could be repeated in two weeks time when elections are held in the city-state of Berlin, the spokesman for the AfD's Berlin branch told Sputnik on Monday.

"This success is phenomenal. We gained from all the other parties. Unfortunately for them, they just assured, that they will not change their course of Willkommenskultur [welcoming culture]. Therefore our next victory in Berlin (18 September) is on the books," Ronald Glaeser said.

© REUTERS / Michaela Rehle
Merkel’s Party Beaten Into Third Place by Anti-Migrant AfD in Local Election – Poll
The left-leaning Social Democrats (SPD), part of Merkel's ruling coalition, led in Mecklenburg-Pomerania with 30 percent of the vote. They are widely expected to form a coalition with the CDU, which obtained 19 percent of the vote. The SPD, Die Linke and the Greens would not be able to form a governing combination as the Green Party in this state did not pass the 5-percent threshold, one of the local Green Party members told Sputnik on Monday.

All the parties now represented in the state parliament have ruled out forming any coalition with the AfD.

The AfD's second result became a sensitive blow to Merkel's party in Mecklenburg-Western Pomerania, which her own constituency Stralsund falls into. On Monday, CDU's general secretary Peter Tauber admitted that voters "wanted to send a signal of protest, as we had noticed in discussions about refugees."

© REUTERS / Fabrizio Bensch
Angela Merkel in 'Political Earthquake' as Right-Wing AfD Overtakes Her in Poll
Sunday's election was the first of five regional polls before a general election expected in just over a year. In two weeks time Berlin will hold state elections, with polls predicting further gains by the AfD.

The party known for its anti-Islam and anti-migrant stance was established in 2013 and since then has entered 8 out of 16 local parliaments, not counting Mecklenburg-Western Pomerania.

This summer’s attacks across Germany raised fears about Islamic terrorism and helped to increased the AFD's support. Merkel’s approval rating, in contrast, fell by 12 points within a month to 47 percent in August with nearly two thirds of respondents disapproving of the chancellor's refugee policy, according a poll conducted by Infratest Dimap in August.