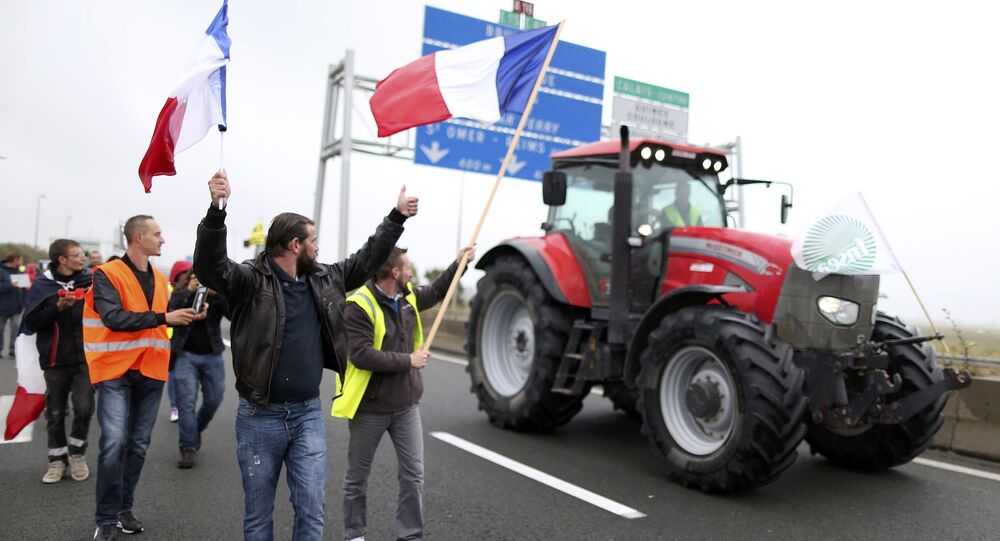 France is suffering severe disruption from farmers, truckers and residents living in Calais and fed up with the so-called "Jungle" camp, where an astonishing number of migrants live.

Tensions are escalating between haulers and migrants living in the camp, following a spate of unofficial road blocks set up at night by refugees in an attempt to ambush drivers and board their trucks bound for Britain.

Meanwhile, Calais residents and business owners are calling for the camp to be closed down after declaring the French Channel port an "economic disaster zone."

I've reached the front of the blockade, all traffic now stopped on the A16 in #Calais pic.twitter.com/QTJBTRyzAC

​On a recent visit to Calais, French Interior Minister Bernard Cazeneuve pledged to close the jungle.

"You see shops closing down, the number of tourists is going down tremendously. Also the traffic in the port has gone down by 20 percent and the only reason is that the road transporters and the families are scared to drive to Calais. They don't know if they will be able to cross without being attacked."

Authorities in France suggest that around 6,000 people are living in the Calais camp. Humanitarian organizations working inside the camp however, say that number is more like 9,000 — with around 100 more people arriving every day.

"The situation is at stale mate," Neezo Dhan, and independent volunteer in Calais told Sputnik.

"Nothing it being done to resolve the situation, which is why the locals are feeling frustrated, meanwhile supplies are running low in the camp."

Dhan, who recently helped organize children's parties in the camp, said conditions are deteriorating — and are set to get worse with winter approaching.

​"All of the food is purely donated food, nothing is provided by the authorities. There are three or four social kitchens run by volunteers. They're in need of supplies."

As for the people living inside the camp, Dhan says they "just want a better life," and instead they are being "treated like animals not human beings."

'Where the Police Shoot at Us'

"Many four-year-olds speak perfect English, because they've been taught to in the camp. Recently, one youngster took us around the camp and pointed to the area 'where we try and go to the UK' and 'where the police shoot at us.' These kids are seeing what they should not be witnessing at their age," Dahn told Sputnik.

As the tensions between haulers and migrants escalate with protesters blocking the main road routes towards Calais, causing disruption between England and France, Dhan says they're taking out their frustration on the wrong people. Surely, the authorities should be the ones that are held to account, not the refugees and migrants?