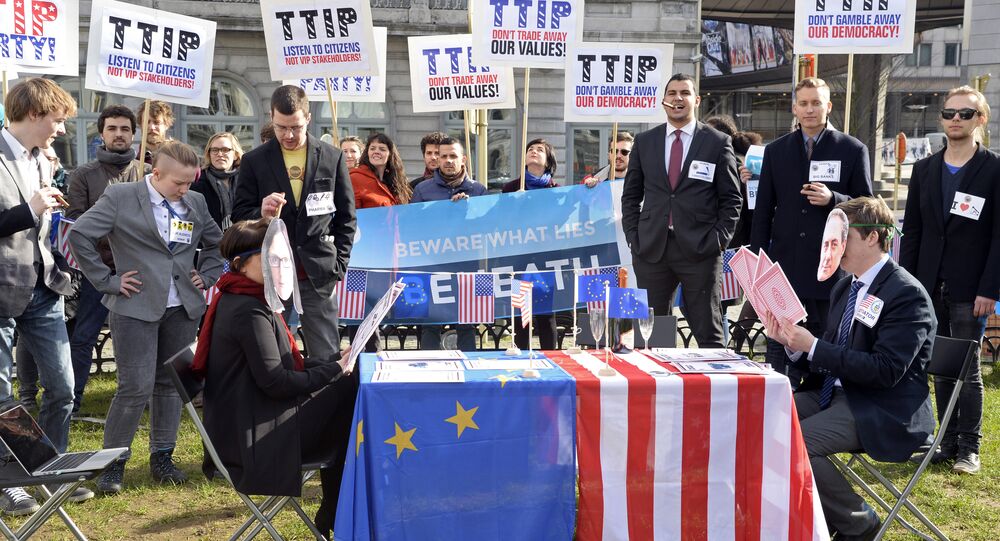 European Commission President Jean-Claude Juncker is stubbornly defending continuing talks over the controversial Transatlantic Trade and Investment Partnership (TTIP) despite Belgium joining France and Germany in calling for them to be suspended.

The TTIP would create the biggest common trading area in the world, giving the US access to the huge EU market and vice-versa. However, there is growing opposition to the deal among the public — particularly in Germany.

"This treaty could represent growth and jobs for Europe on the condition that it is balanced. What is on the table doesn't seem to be. So, for the moment, I prefer to say that it's not right and that perhaps we will resume negotiations later."

His comments follow French Prime Minister Manuel Valls who has called for a "clear break" to the negotiations.

"The agreement on the table is, under these conditions, unacceptable. We need a clear halt in order to resume from a new basis," Valls said.

He implied that the current negotiations were more favorable to the US than to the EU.

Whilst German Vice-Chancellor Sigmar Gabriel said: "In my opinion, the negotiations with the United States have de facto failed, even though nobody is really admitting it."

Trade deals with nations who have have much lower labour standards than the EU is now called social protection?#CETA https://t.co/3EJI4UJxuI

​However, Juncker told reporters at the G20 summit in China that the talks would continue, in a show of defiance.

"We are continuing to negotiate with the US because we think these trade agreements are of highest importance," he told reporters in Hangzhou, China.

His comments will anger opponents of TTIP, who believe Brussels is not listening to growing public opposition to the trade deal and is a further sign of the EU machine acting like a juggernaut.

The TTIP talks have been condemned by many campaign groups and MEPs for being conducted behind closed doors, with restricted access to the discussion documents. Moreover, billions have been spent to large corporation on lobbying to secure good terms in the negotiations.

The major stumbling block is regulation. Trade in the EU is regulated by Brussels, whose food, environment, health and other standards are commonly agreed. However, they do not equate necessarily to US standards. Opponents say the US is putting pressure on the EU to water down its regulatory standards.

An example is food. In the event of a US firm not being allowed to sell is products — such as meat treated with growth hormones and genetically engineered and modified foods, as are currently allowed in the US — in the EU, the firm could sue the EU or member states.

At the heart of the TTIP is a controversial proposal for an investor-state dispute settlement (ISDS) mechanism, which would allow companies to sue governments if their regulations or laws affected their profits.

© REUTERS / Francois Lenoir
A demonstrator holds a sign during a protest outside a congress centre where negotiators are expected to discuss the 14th Round of the Transatlantic Trade and Investment Partnership (TTIP) in Brussels, Belgium, July 12, 2016.

​Under ISDS, if a US multinational company lost profits because their product or service was banned by law for health or other reasons, they would be able to sue a government — or the EU — for loss of earnings. These disputes would be resolved in special tribunals, not under existing EU judicial systems, which are democratically accountable.