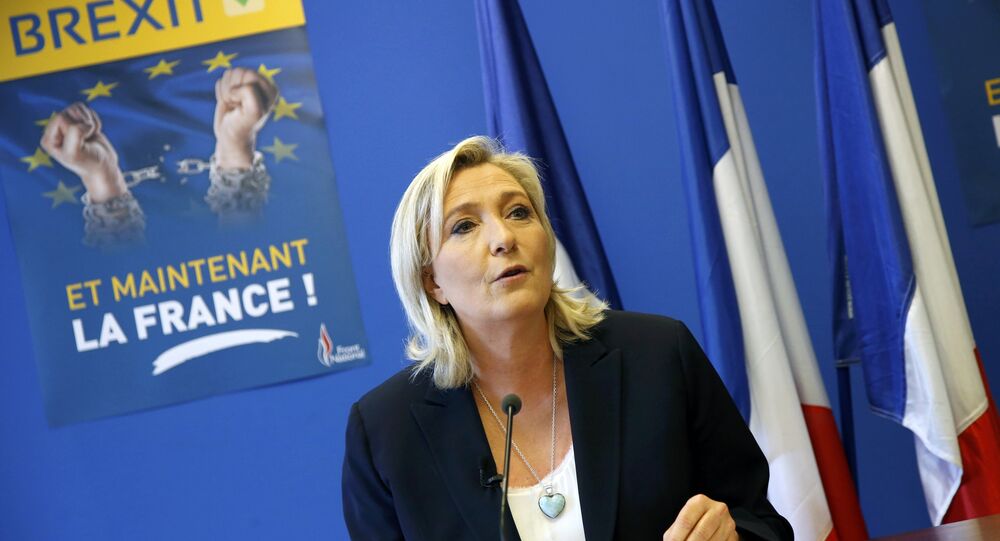 French National Front leader Marine Le Pen is overjoyed by the results of local elections in the German state of Mecklenburg-Western Pomerania, which saw the right-wing populist, anti-immigration, Eurosceptic Alternative for Germany (AfD) party trounce the party of Chancellor Angela Merkel in her home state on Sunday.

© REUTERS / Michaela Rehle
Merkel’s Party Beaten Into Third Place by Anti-Migrant AfD in Local Election – Poll
AfD, which was founded only three years ago, took over 21.9% of the vote in Sunday's election, with Merkel's Christian Democratic Union (CDU) falling to third place with 19%, behind AfD and the ruling Social Democrats (SPD), who won 30%. The CDU result is down 4 points from the 23% it secured in 2011, with the Social Democrats also down, by 5%, compared to the 35.6% they received in 2011. The far-left Die Linke Party finished fourth with 12.9%, down from 18.4% in 2011.

© AP Photo / Claude Paris
Frexit: Marine Le Pen Promises EU Membership Referendum If Elected French President
Recent polling has shown that over half of Germans are opposed to Chancellor Merkel serving a fourth term. Federal elections will take place sometime between August and October 2017. Merkel has not yet confirmed whether she will run.