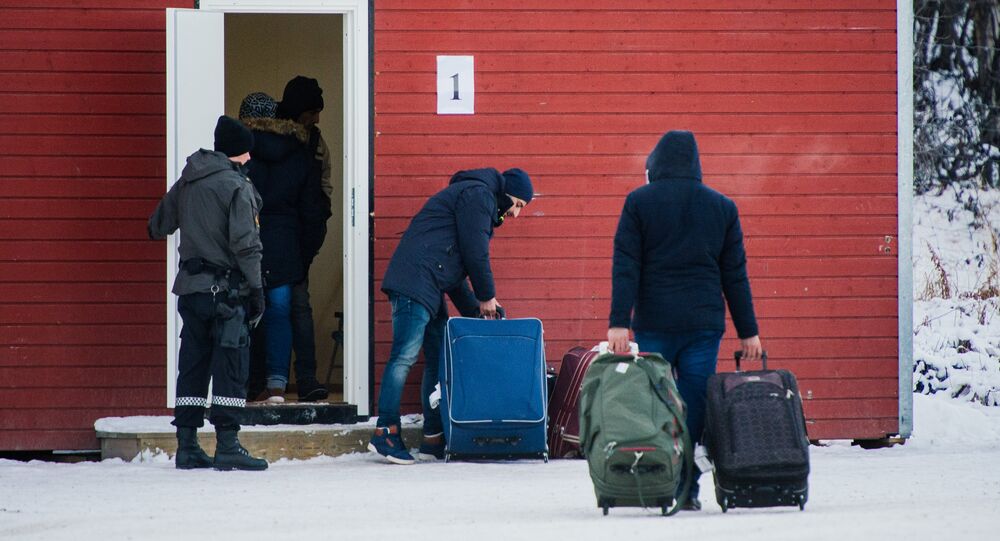 Since more asylum-seekers remain in Norway after receiving an official rejection, Norwegian immigration authorities have launched a poster campaign to encourage more foreigners without legal residency documentation to leave the country voluntarily. Consenters are to be treated to a cash bonus.

© AFP 2020 / JONATHAN NACKSTRAND
Norway Admits Arctic Migrants Come 'Because It's Easy', Not Because of 'Secret Russian Plot'
Around 700 placards in seven of the country's most widely-spoken foreign languages (including English) are to be deployed at road junctions in 31 Norwegian municipalities within two weeks. The posters explain which rights the asylum-seekers are about to lose upon refusing, thus motivating the migrants to choose assisted return over deportation. Currently, Norway is considering denying up to half of the asylum applications received last year.

"Have you been refused asylum? Without legal residence you are not allowed to either work or study in Norway. With assisted return, we pay for your journey home, so that you can get money for a new start in your home country," is the message from Norway's Immigration Service (UDI) to illegal immigrants.

#Norway prepares for the #expulsion of up to 15,000 whose #asylum bids have been #rejected.https://t.co/2eQiv262SOhttps://t.co/aRt7WojxIx

​"We hope to get more people to make use of the offer and go home," Christine Wilberg, department director at UDI, told Norwegian national broadcaster NRK.

So far this year, more than 1,100 people traveled from Norway with assisted return. The returnees get their home journey covered together with aid to re-establish themselves in their respective home countries. Immigrants who choose to return voluntarily by the end of the deadline will receive a "farewell" bonus of 20,000 NOK (roughly $2,000). Those who decide to stay despite the refusal forfeit all the bonuses and run the risk of being deported by the police and immigration authorities.

"I believe there are better ways to reach these people. On the one hand, this is all about advertising hullaballoo, on the other hand it is also a waste of public funds," PR adviser Jarle Aabø told NRK.

The UDI, however, believes that the ultimate result is worth the money.

"This campaign cost around 800,000 to 900,000 NOK. It costs around 130,000 to have a person living in a reception center for one year, so it is a good investment," Wilberg responded, citing a doubled number of visitors on the UDI web pages. "The UDI has previously conducted two similar campaigns, which are believed to have encouraged more people to travel home voluntarily. The cost of having people living in reception centers is so large that such campaigns are paying off," Wilberg said.

© Flickr / denisbin
Norwegian Minority Report: Xenophobia Justified by Crime Statistics
Of the 31,000 asylum seekers arriving in Norway last year, about half are to be returned, according to estimates by UDI Director Frode Forfang.

"While integration of the arrivals is going to be prioritized, there are indications that their return emerges as an even more important topic," Forfang wrote in his blog.

Of those who applied for asylum in Norway last year, Syrians, Afghanis and Eritreans were the largest groups.