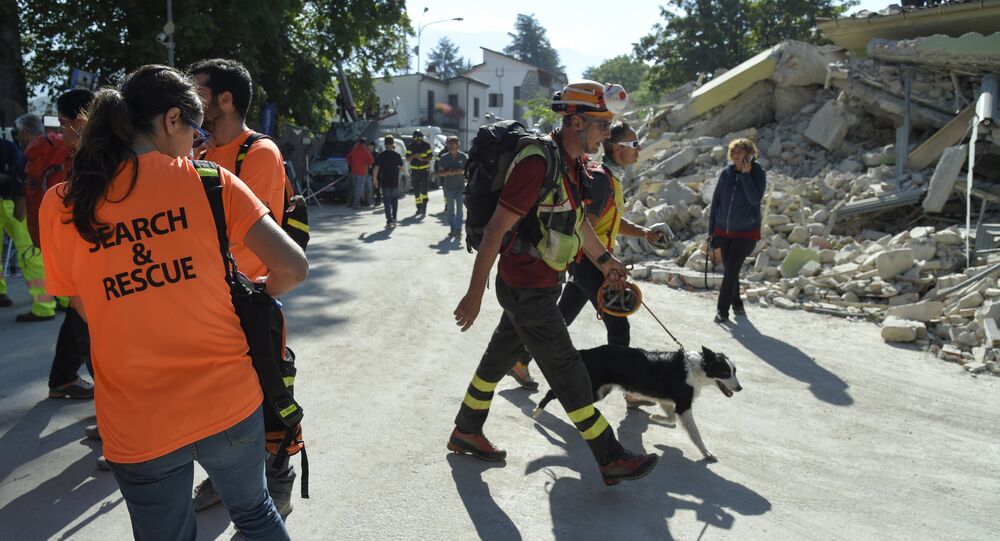 A pet Pit Bull puppy living with her family in Poggio Castellano, Italy, kept barking for 40 minutes before the earthquake struck, and saved the day. Leo, the Labrador, and a German Shepherd called Sarotti helped sniff out kids under the rubble in the quake’s aftermath.

The historic center of nearby Amatrice in northern Lazio was completely destroyed. More than 291 people were killed during the earthquake. Nearby hamlets were affected but witnessed less damage.

That crucial night, Lucia Deleri and her husband woke up to their four month old Pit Bull, called Mafia, barking and jumping around the house.

“We heard other dogs barking in the area but didn’t think it could be for anything like this. We tried to sleep again but she just kept on barking,” Deleri told The Local. “[Anyway] we left the house immediately after the first strike.”

© AP Photo / Andy Wong
Man Rescues 1,000 Dogs From Dog Meat Festival in China
Deleri’s home was not affected by the first quake, but was heavily damaged by aftershocks, making it unsafe to live there.

“We’re living in a tent, but once the repairs are done, we plan to move back in,” announced Deleri. “We’re not afraid to carry on living here.”

Other spectacular “hero” dog stories have emerged in the aftermath of the tragedy.

A Labrador, named Leo, helped to locate an eight-year-old girl named Georgia, who was trapped under the rubble of her collapsed home.

The rescue team arrived 16 hours after the earthquake struck.

“We went straight there and Leo, as soon as he got going, within less than 40 seconds, gave us a strong signal. With our colleagues from the Reparto Mobile Senigallia and firemen, we dug with our hands for nine hours, and in the end we found the girl alive,” policeman Mateo told The Local.

A 10-year-old girl was also saved, after a German Shepherd named Sarotti, sniffed her out.

However, despite their heroism, many dogs were left without homes and owners.

“There are dogs crying for their owners, they can sense fully well that they are no longer there,” said Deleri.

Rescue dogs helped to assist the emergency staff for several days after the earthquake stopped.