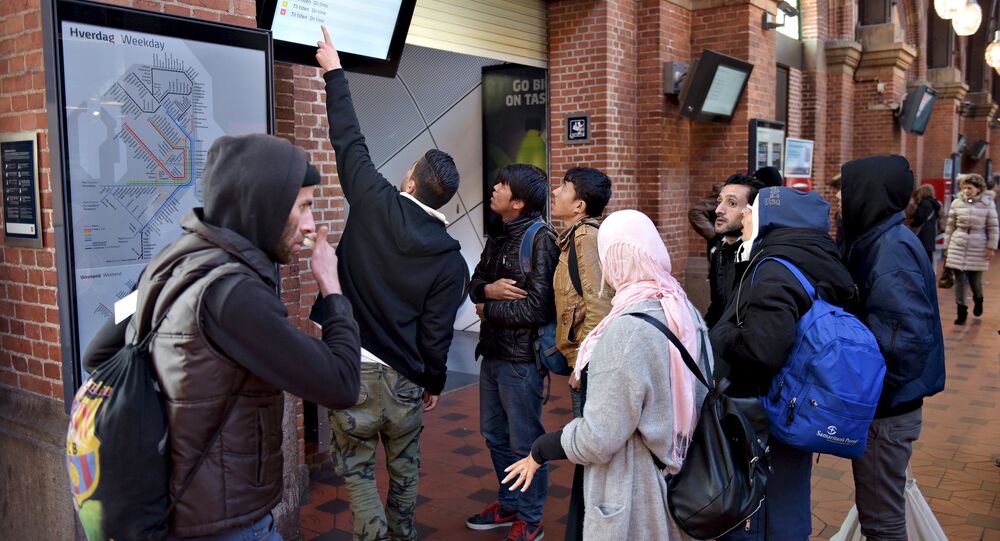 Despite its number of asylum applications reaching a record low, Denmark has announced yet another toughening of immigration rules. The proposed package of measures makes it harder for newcomers to obtain residency and gives Copenhagen the go-ahead to send back asylum-seekers at the Danish border.

© AFP 2021 / ODD ANDERSEN
Slippery Slope: Denmark Bets on Mosques to Promote Integration
As part of the Danish government's newly released, so-called 2025 Plan, a total of 44 immigration initiatives were introduced. Despite its pledges to "work for Denmark to remain open," Copenhagen has announced plans to further tighten its immigration procedures, Danish newspaper Jyllands-Posten reported.

Despite plummeting immigration figures, the Danish government is sparing no effort in making Denmark less attractive to asylum-seekers. The most spectacular of the proposals, presented by Denmark's Immigration Minister Inger Støjberg is the Norwegian-inspired proposal dubbed "emergency brake," which allows the Danish government to completely seal off the Danish border, if the influx of asylum-seekers suddenly escalates. This proposal will allow Danish police to blankly reject refugees directly at the border and completely refuse to address their cases. According to the authorities, this is aimed to prevent any repetitions of last year's migrant crisis, which saw hundreds of refugees walk along Danish motorways en route to Sweden.

© AP Photo / Jens Dresling
Refugees Choose Copenhagen Over Cash Offers to Depart Denmark
Currently, it is up the incumbent government to assess whether the so-called Dublin Regulation, which makes EU member states responsible for the examination of asylum-seekers' applications, has effectively collapsed. If so, the Danish border may become completely impregnable for migrants.
Moreover, the Danish government also wants to bolster the asylum-seekers' motivation to leave the country, offering "increased repatriation support" in the form of financial payments to cover health care and education expenditures in a foreigner's home country.

Additionally, foreigners living in Denmark may only be able to apply for permanent residency after eight years, as opposed to the current six. On top of that, the government was to further tighten employment requirements.

The Danish government aims to provide an "incentive" for foreigners to integrate, saying that permanent residence may be achieved sooner once they meet supplementary conditions, such as displaying 'active citizenship,' being gainfully employed with an annual salary of 270,000 DKK (roughly $40,000) and completing Danish language courses.

© AP Photo / Thanassis Stavrakis
World of Difference: Immigrant Children Have Less Empathy, Danish Study Shows
According to the Danish government, the one billion DKK (150 million dollars), saved through asylum restrictions at home, will be redistributed to countries like Syria, Turkey, Lebanon and Jordan, which were all hit by the migrant crisis.

Over the first eight months of 2016, some 4,700 asylum seekers have come to Denmark, a Nordic nation of just 5.6 million people. In 2015, Denmark registered 21,000 asylum applications, which is still a far cry from the 163,000 registered in neighboring Sweden, which has approximately twice as many people.