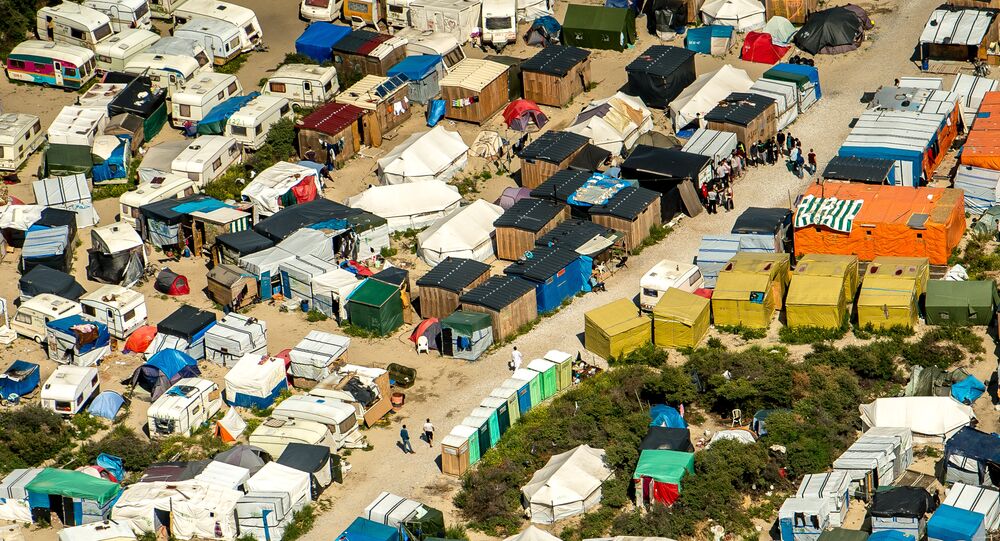 September 5 will see an unprecedented move against the Calais Jungle migrant camp in France; it is being organized by local shopkeepers, businessmen, farmers and police unionists.

© Flickr / Sam valadi
Finding Ways and Means: Migrants Discover New Routes to Europe
So-called Operation Snail, an initiative to block traffic near the Calais Jungle migrant camp is due to be staged by local shopkeepers, businessmen, farmers and police unionists on Monday.

They said that they plan to block the A16 motorway leading to the port with a "human chain", and are pledging that they will not break it until the Calais Jungle camp that already numbers about 10,000 people is totally dismantled.

Since last year, Calais has been home to a large migrant camp – the so-called Jungle – which is notorious for its squalor. Thousands of migrants from the Middle East and North Africa are living in the Jungle, located not far from the Channel Tunnel, in hopes of reaching the United Kingdom.

Many living in this camp are trying their best to illegally enter the United Kingdom via the Port of Calais or the Channel Tunnel by stowing away on trucks, ferries, cars, or trains traveling to Britain.

The camp grabbed global headlines during the European refugee and migrant crisis when its population started to grow and the French authorities carried out evictions.

In an interview with Sputnik, Sebastien Rivera of France's national haulage federation, said that even though over the past 15 years local long-haul truck drivers have grown used to the presence of migrants in the region, they cannot tolerate what is currently going on.

He said that in their drive to enter the UK, migrants have become more and more brazen, and that in the past six months they have been storming the A16 motorway between Calais and Coquelles which leads to the entrance to the Channel Tunnel.

"They block traffic using trees and tires which have been set on fire. There were cases where vehicles [had been torched] with Molotov cocktails; migrants penetrate inside trucks by breaking wind shields and cutting tents; truck drivers are being threatened. Although cases of theft are not uncommon, migrants are never brought to court," he said.

In an interview with Sputnik, Francois Guennoc, deputy chairman of the Migrants' Shelter association, for his part, described the September 5 action as a politically motivated event.

"It is obvious for us that this is a political maneuver by Calais City Hall and the right-wing opposition. In other words, it is a political operation, and we will soon decide on how to respond to this action," he said.

He also described the upcoming protest as "extremely dangerous" because it may further exacerbate what is already a tense situation in the Calais Jungle.

© AFP 2021 / RADEK MICA
Eastern Europe Unites in Struggle Against EU’s Migration Policies
Earlier this week, Calais Mayor Xavier Bertrand called for a new deal on migrants that would allow them to file UK asylum applications while on French soil.

He told the BBC broadcaster that migrants should be allowed to apply for asylum at "hotspots" in France instead of waiting for the possibility to reach Britain to do so. He added that under his plan, migrants who are rejected by the UK authorities would be deported to their countries of origin.

According to a treaty between France and Britain, the documents of those attempting to travel to the UK across the English Channel or via the Channel Tunnel are checked on the French side. This means that undocumented migrants are unable to legally reach Britain from France to apply for asylum there.