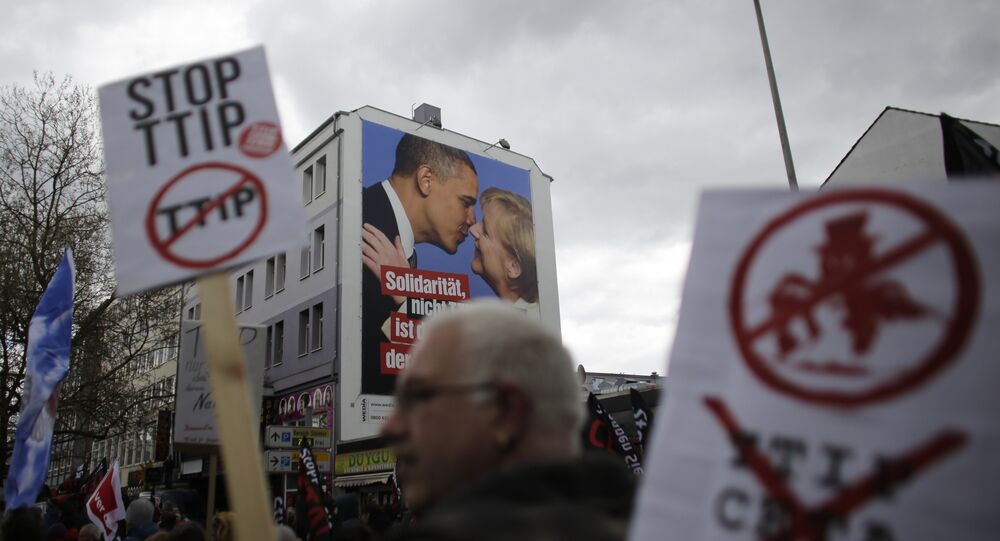 © REUTERS / Kai Pfaffenbach
Will Germany's Next Chancellor Abandon Merkel's Hardline Euro-Atlanticist Stance?
On Sunday, German Vice-Chancellor Sigmar Gabriel told German broadcaster ZDF that negotiations between the US and EU on the Transatlantic Trade and Investment Partnership (TTIP) had come to a halt, putting an end to the plan.

"In my opinion the negotiations with the United States have de facto failed, because we Europeans did not want to subject ourselves to American demands," Gabriel said.

He added that "nothing is moving" in the negotiations.

German commentator and financial expert Ernst Wolff told Sputnik that Gabriel's candid assessment of the trade agreement was an example of political pandering in the run up to Germany's federal elections next year.

"I think that he has already started campaigning for the upcoming parliamentary elections and has to some degree harnessed the populist wave. He knows very well that there is a lot of opposition to TTIP among Germans, and he is just voicing the popular position," Wolff said.

Social Democratic Party chairman Gabriel is also Minister for Economic Affairs in Angela Merkel's coalition government. Despite his powerful position in the German government, Wolff expressed skepticism about his ability to influence TTIP. He thinks that the controversial trade agreement will nevertheless be approved by the EU.

"Even the largest economy in Europe is dependent on the dollar system and simply isn't in a position to go against the will of the Americans. I am willing to bet that TTIP will become a reality during the coalition CDU/SDP government of Merkel and Gabriel," Wolff said.

"The final decision doesn’t really depend on Chancellor Merkel or the German federal government. The decision on whether TIIP will go ahead will be made in Washington, not Berlin."

"This is another step on the path to the triumph of the left, trade unions and other social institutions which reject this lamentable agreement with transnational corporations," Die Linke MP Diether Dehm said.

Dehn acknowledged opposition to TTIP from across the political spectrum.

"From conservatives to communists, everybody came together for one purpose."

With Germany's federal elections looming next year, Gabriel recently held a meeting with Die Linke founder Oskar Lafontaine, who like Dehn is a former member of the SDP.

Lafontaine served as Finance Minister in the government of Gerhard Schroeder, but then left the SDP to set up the Electoral Alternative for Labor and Social Justice (WASG). In 2007 his party merged with the Party of Democratic Socialism (PDS) to form Die Linke.

Dehn urged his former colleague to leave Angela Merkel's coalition and join forces with Die Linke instead. He said that a left-wing coalition should make life easier for German businesses by rejecting TTIP, and also anti-Russian sanctions.

"If Gabriel wants, (we can form) a different political majority – that's what Lafontaine and other Die Linke leaders have said," Dehn said.

© AP Photo / Michael Sohn
Survey Reveals Half of Germans Against Idea of Re-Electing Merkel
In the last German federal election in 2013, Angela Merkel's Christian Democratic Union (CDU) and its Bavarian sister party the Christian Social Union (CSU) won 311 of 598 seats in the Bundestag. Gabriel's SDP was next, with 193 seats, followed by Die Linke with 64 seats and the Greens with 62 seats.

The next federal election is to take place in autumn 2017. In a possible indication of the national mood, the mainstream parties suffered significant setbacks in regional elections held in three German states in March this year.

The Green party won the most votes in Baden-Wuerttemberg, where the newcomer Alternative for Germany (AfD) surged into third place after the CDU. The Eurosceptic and anti-immigration AfD also made significant gains in Rhineland-Palatinate, taking 14 percent of the vote and third place after the SPD and CDU. In Saxony-Anhalt the CDU got 30 percent, followed by the AfD (25 percent) and Die Linke (16 percent).