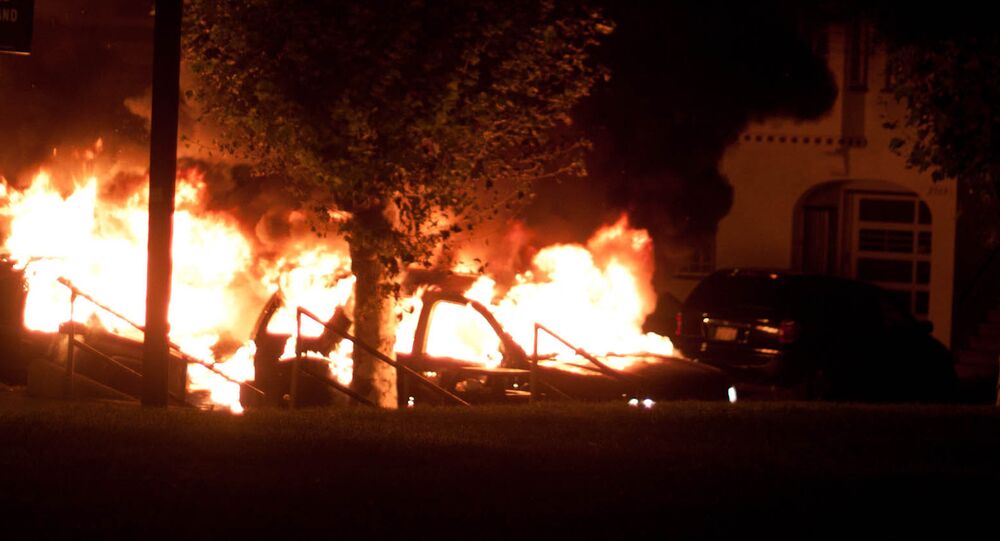 This summer, Sweden has experienced an unprecedented wave of car arsons that began in the Malmö metropolitan area and spread to dozens of other Swedish cities. Of late, this scorching trend has expanded to neighboring Denmark, where dozens of cars were burnt out last week.

© AFP 2021 / JONATHAN NACKSTRAND
Sweden is on Fire: Car Arson Epidemic is Catching
Danish Police are still looking for clues in a spate of car fires, which hit the country's capital Copenhagen. Overall, 30 cars have been burned in August alone. The arson has not stopped despite the arrest of a 21-year-old man.

Last night, two more cars were set on fire in Copenhagen, the Danish tabloid newspaper Extra Bladet reported. According to Copenhagen Police, the two incidents happened in adjacent neighborhoods. As the two locations were only about two kilometers apart, the fires could have been started by the same offender.

So far, no one has been injured in the wave of vehicular arson that Copenhagen has endured for over a week now. Danish police have been cautious about drawing suggestive parallels with Sweden, where the never-ending series of car blazes triggered strong reactions from irate residents, struggling police and the confused authorities.

​"It is still too early to establish any connection to the fires that have happened in Sweden. Moreover, this is also irrelevant. We won't tolerate the systematic burning of cars in the streets of Copenhagen anyway," police spokesman Rasmus Bernt Skovsgaard told Danish newspaper Berlingske, stressing that Danish police officers are "naturally talking" to their Swedish colleagues.

© AP Photo / Thanassis Stavrakis
World of Difference: Immigrant Children Have Less Empathy, Danish Study Shows
In Sweden, the number of car arson attacks has doubled in recent years, according to figures from the Swedish Civil Contingencies Agency (MSB). For car owners in vulnerable areas this has led to annoying consequences such as higher insurance premiums.

In Sweden, 65 blighted urban districts have been officially recognized as "exclusion areas" and are commonly referred to as "no-go zones" and "ghettos," where police and ambulances seldom dare. According to an even less optimistic survey, compiled by Kurdish-Swedish researcher and economist Tino Sanandaji, the number of "parallel societies" reached as many as 186 already in 2014. In Denmark, the number of marginalized and troubled neighborhoods tends to hover at around 30.

© AP Photo / Stephen Brashear, File
Burning Wheels: Stunned Sweden Scrutinizes Mysterious Hoverboard Fires
Meanwhile, car burnings have become such a common occurrence in Sweden that sociologists are no longer alarmed by the acts themselves, but rather by the fact that they are not followed by riots, unlike in previous years.

"It is rare that the fires persist without anyone hurling stones or seeking conflict with the police," Manne Gerell, a doctoral student in criminology at Malmö University, who conducted research on car fires and riots, told Swedish newspaper Svenska Dagbladet.

The spate of car fires is commonly blamed on two reasons: increased segregation and few visible policemen. Sweden's understaffed and severely criticized police have recently proposed utilizing drones to keep an eye on the troubled neighborhoods.