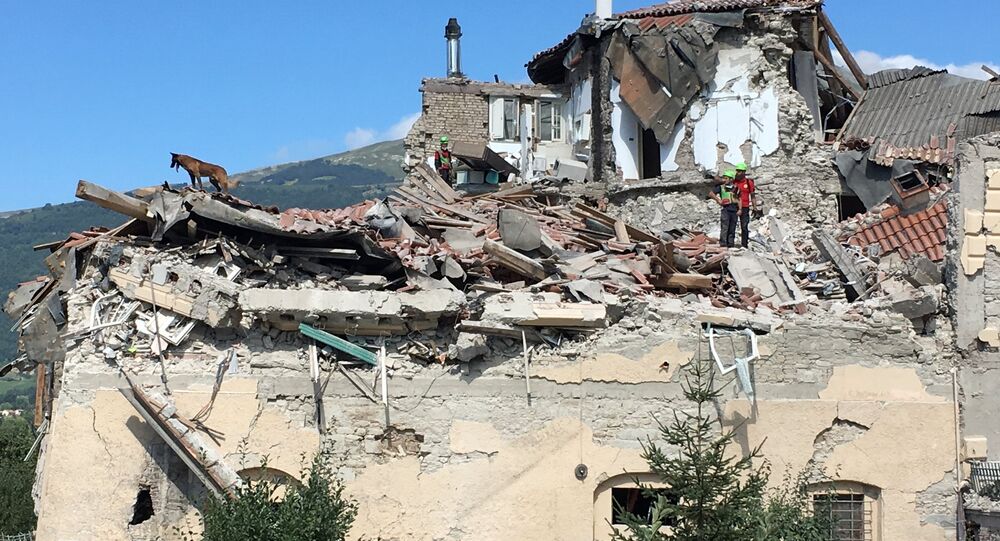 #ItalyEarthquake: It Was a 'Nightmare to Wake Up From an Earthquake Like This'

Dozens of people died in a powerful earthquake that rocked central Italy in the early hours of Wednesday. Information officer from the Red Cross Italy Tommaso della Longa told Radio Sputnik about the situation on the ground.

© REUTERS / Emiliano Grillotti
Dozens Die in Italian City of Amatrice Close to Earthquake Epicenter - Mayor
According to della Longa, the situation in the disaster area is critical. Many buildings have been destroyed, with some people still likely to be buried alive under the debris.

"We have just arrived in Amatrice, the city most heavily destroyed by the earthquake. The situation now is really terrible. At least the half of the city is destroyed," the Red Cross officer said.

Della Longa also stated that from the very beginning the Red Cross deployed special rescue teams in order to find as many survivors as possible. The medical organization is also taking care of the people who are safe, deploying psychological support teams that are "really needed after this type of emergency", the officer said.

At least 159 people were killed in an earthquake that struck a mountain range in central Italy in the early hours of Wednesday, officials said. The death toll is expected to rise as rescue operations are still underway in several cities and towns that have been severely damaged.

At the same time, della Longa hopes that there still might be people who are still alive and who could be saved.

"Remembering the earthquake in 2009, people could still be alive after some days. So, these hours are really important. We are working around the clock to save as many people as possible," he said.

The earthquake primarily hit the rural areas, where there are no proper roads and poor logistics.

Heartbreaking before & after images today of the country at the top of my 'someday' list. ❤️ #ItalyEarthquake pic.twitter.com/YUoEJVZBDk

"It is a real rural area with small cities and numerous tiny villages. […] There are trucks, ambulances, emergency teams and only one road. So you can imagine now how difficult it is," della Longa said.

He also added that "it is almost impossible to predict an earthquake."

"The biggest problem is that as in 2009, the earthquake occurred in the middle of the night, when people are at home and asleep. So it is much more difficult to get out and to escape," della Longa explained, adding that the earthquake lasted 142 seconds and "should be really a nightmare to wake up from an earthquake like this."

The 6.2 magnitude earthquake hit the central Italian Umbria region around 3:36 a.m. (01:36 GMT), resulting in extensive damage and triggering aftershocks as strong as magnitude 5.5.

At least 60 people died in the towns of Accumoli and Amatrice alone, Civil Protection service chief Fabrizio Curcio said on a visit to Amatrice with Prime Minister Matteo Renzi.

An additional 24 lives were claimed in the administrative region of Marche, the Civil Protection Department said in separate remarks.