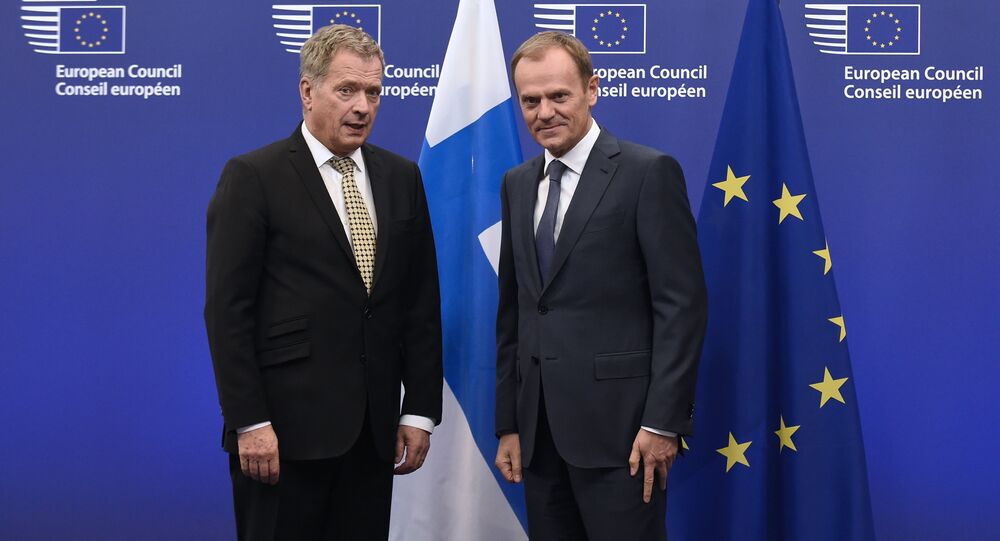 In a diplomatically explosive speech, the President of Finland has slammed the EU for failing to deal with migrant and economic crises, saying they are "largely self-inflicted" and that - despite successive summits - they continue because of EU obfuscation and disagreement.

Finnish President Sauli Niinisto used his speech to the Ambassador Seminar in the Finnish Parliament Annex, Helsinki, August 23, to lay in to the EU for its failure to tackle some of the most pressing issues facing the union — notably the migrant crisis, the EU-Turkey migrant deal and the Eurozone troubles.

"The European Union appears to have reached an impasse in many other respects. This impasse is largely self-inflicted. We all know the steps of this dance: a crisis comes out of nowhere. Summits are held. And then the same thing happens again. And the can is simply kicked down the road. The problem becomes even more intractable," Niinisto said.

"The EU's problem is ultimately political. Too often, decisions are made to postpone genuine decisions until later. And even when decisions are made, their implementation often adds up to no more than good intentions. By acting in this way, the EU is undermining its own future in the eyes of its citizens. The feeble approach taken to the joint handling of the migration crisis is one example of this. There is much room for improvement," he added.

His comments come at a critical time for the EU, which is having to rethink its whole philosophy following growing anti-EU sentiment, which is sweeping across Europe — exemplified by the decision by Britain to pull out of the union, or Brexit, which sent shockwaves through the corridors of Brussels.

Nearly a year after it was agreed to relocate 160,000 migrants from Greece and Italy throughout the EU member states, just over 4,000 have actually moved, because many members are refusing to have mandatory quotas put on them. Poland is supporting Hungary in its legal action against the quotas.

Meanwhile, the Schengen zone is in disarray, after many countries pulled up their borders, throwing into chaos the whole principle of open borders within Europe. The Dublin Agreement — whereby migrants are processed at the country of arrival — has been largely ignored, leaving tens of thousands wandering Europe without having been processed.

The rise in terrorist attacks in Europe has highlighted major flaws in the security of the Schengen's external borders, as well as significant intelligence failures, as many blame the rise in attacks on the failure to control immigration and shortcomings in Europol — the EU's law enforcement agency.

The dysfunctionality of the Eurozone single currency area has been highlighted by the difficulties Mediterranean states — such as Greece, Spain, Portugal and Italy are having maintaining within the Stability Pact — the criteria for keeping the Eurozone economies in cycle.

"It is clear that the EU's future is again in the melting pot. Many now want to see a radical deepening of the Union, while others want to see it break up. I think that both will be disappointed," The Finnish President said.

"Instead of ambitious, new plans, it would be more relevant to focus on the essential, go back to basics and ensure that all member states and their citizens feel that the European Union brings an element of stability to their lives. However, many people say that even our everyday security is under threat and that terrorism has come permanently to Europe."

Berlin: Germany, EU Have No Reason to Doubt Migrant Deal With Turkey