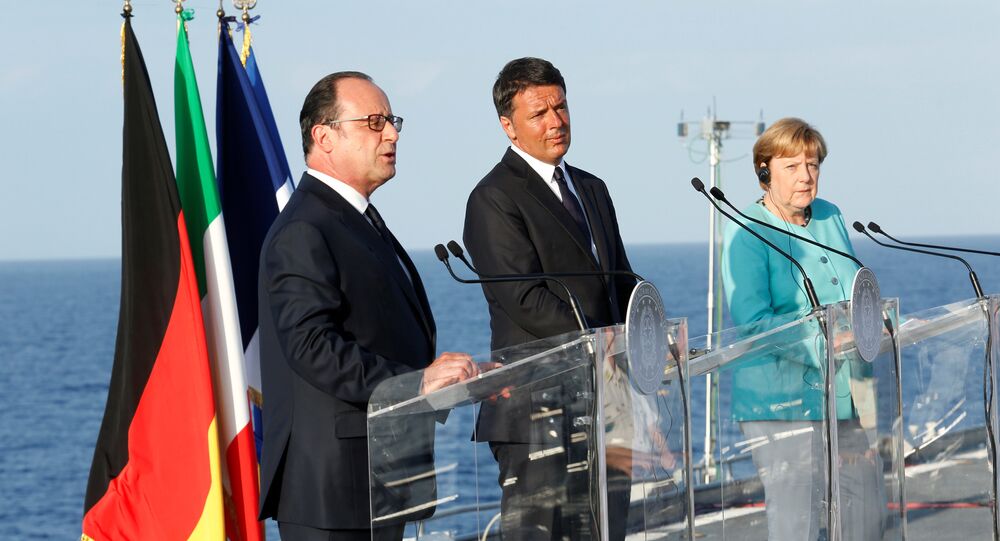 Much Ado About Nothing: First Post-Brexit EU Summit Yields No Results

Despite all the pomp and circumstance of the recent meeting between Italian Prime Minister Matteo Renzi, German Chancellor Angela Merkel and French President Francois Hollande, the summit in Italy produced no tangible results, Tiberio Graziani, president of the Institute of Geopolitical and Social Studies told Sputnik.

Monday’s meeting on board the Italian aircraft carrier Garibaldi anchored off Ventotene Island was the first European summit after Britain’s decision to leave the European Union. Even though Matteo Renzi said that Project Europe wasn’t yet over, Tiberio Graziani said that the three European leaders had focused more on their domestic crises rather than looking for ways to reverse the process of “fragmentation and division" the 28-nation bloc is now facing.

“Everything they said about the economy, shared security and migrants was nothing but good intentions, especially in view of the dramatic drop in public spending on defense, scientific research and culture, now happening in Italy,” Graziani said.
Mentioning the issue of European defense, he added that it made no sense for “Europe, as a NATO member, to toe the US line in the Mediterranean, because this is primarily a European problem, above all an Italian problem.”

“Renzi hoped to restart the so-called Project Europe, which is his brainchild as the Italian leader. It looks like nothing came out of it. He has to be aware of hard facts and keep his word. On the economic plane, the trilateral meeting underscored Merkel’s dominant position in the EU, above all in economic issues, even though she referred the matter to the European Commission and once again called Turkey a partner. I think this ‘after-Brexit’ summit simply underscored Germany’s growing clout within the EU,” Tiberio Graziani noted.

© REUTERS / Stringer
EU Has No Scheduled Summit on Situation in Libya Despite Italy's Calls
He said that “a European restart” was possible, but that it depended on the political and economic weight of the EU’s current leadership.

“I think they lack the decisiveness and vision of the people who authored Project Europe, like Altiero Spinelli, Colorni and Rossi. Italy is a Mediterranean nation and unless it finds a way to solve the migrant problem, ensure stability and become a major player in the region and know the allies it can lean on, the entire European continent will suffer,” Tiberio Graziani told Sputnik.

In a nationwide referendum held in June, 51.9 percent of Britons voted for the UK to leave the European Union.

Shortly after the referendum, Prime Minister David Cameron, who had campaigned to persuade  the UK nationals to vote to remain in the 28-nation bloc, announced his decision to resign.