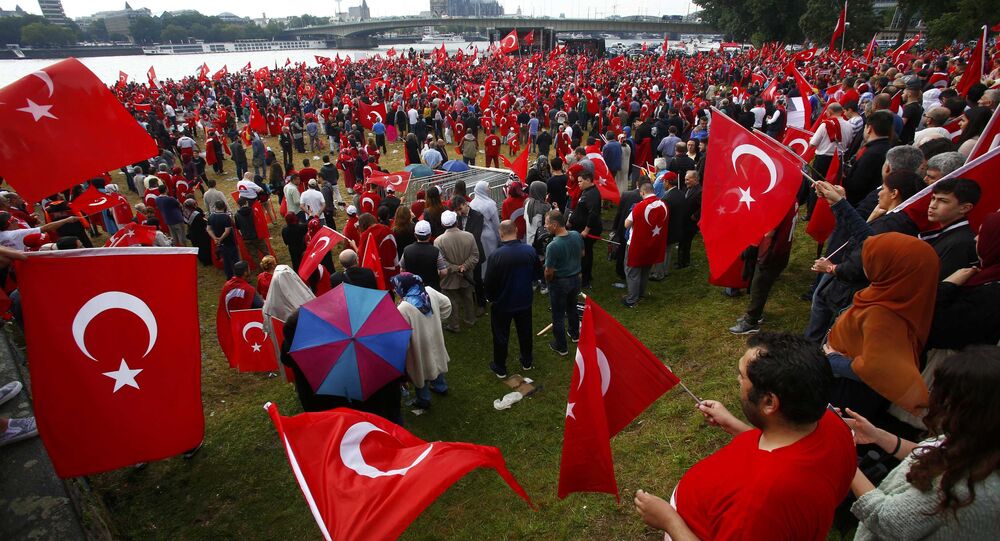 German media has reported on a network of over 6,000 informants spying for the Turkish government within Germany's Turkish community. Asked for comment, German lawmaker Hans-Christian Strobele told Sputnik that the situation was outrageous, adding that criminal charges must be leveled against anyone spying on Germany or its Turkish community.

On Sunday, Die Welt reported, citing unnamed sources, that over 6,000 people inside Germany's three million-strong Turkish community are working as informants for Turkey's national intelligence service, the MIT. The story sparked outraged inside the country, with media and some politicians calling for an investigation. A Bundestag commission has already begun its own checks.

Speaking to Sputnik Germany, Hans-Christian Strobele, a lawmaker for the country's Green Party, emphasized that if the allegations turn out to be true, the offenders must be punished in accordance with German law.

"There must be consequences, because what we're talking about is a criminal offense in Germany. We are talking about the activity of secret agents, and perhaps even more than that; it's possible that specific persons of Turkish origin inside Germany may be threatened."

© AP Photo / Burhan Ozbilic
Berlin Says Visa-Free Regime With Turkey by Oct. Unlikely
According to the the German media, among other things, the MIT's spy ring is suspected of monitoring the Turkish community inside Germany. This is dangerous, according to Strobele, because it means that the informers can collect information on any Turks who might express opinions which are critical of the Turkish government.

Asked to comment on suspicions held by some Germans that Turkish intelligence services have been explicitly tolerated in Germany for many years, the lawmaker suggested that that's unlikely to be the case.  "If someone claims that this is the case, they have to explain what kind of activities they're talking about. If it's about activity in the framework of fighting international terrorism, which Germany too is engaged in, that would be legitimate. But Turkish intelligence cannot work in Germany independently. That would be contrary to Germany's interests, and is therefore is subject to prosecution."

© AP Photo / Tolga Bozoglu, Pool
Leaked Islamist Accusations Sour Relations Between Germany and Turkey
Recently, Turkish officials have reportedly asked the German Federal Intelligence Service (BND) to try to influence lawmakers and officials to extradite supporters of the Fethullah Gulen movement from Germany. Asked to comment, Strobele suggested that attempting to use the BND in this way is not the correct way to go about things.

"If they insist on the arrest or extradition of certain individuals, there are certain legal and judicial mechanisms for doing so. In Germany, the corresponding decision is taken by a court, which must have compelling evidence that a serious offense has taken place. It is not enough for someone to belong to a particular movement that has followers and is active in Germany."

Strobele emphasized that he would be doing everything in his power to bring the issue before the Bundestag's Control Commission, with lawmakers having the right to ask the federal government and federal agencies for a report the situation. Ultimately, the lawmaker suggested that if allegations about a Turkish spy ring turn out to be true, Germany may have to reconsider its intelligence cooperation with Turkey.