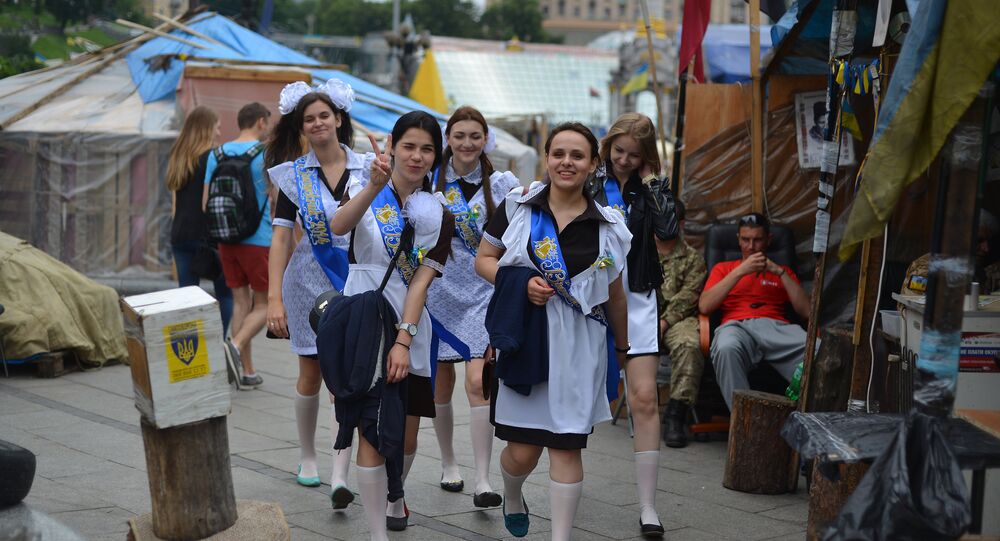 Ukrainian media recently reported that students from western Ukrainian regions have scored the lowest in countrywide external independent testing of students' knowledge of the Ukrainian language and literature, as well as Ukrainian history. Independent journalist Sviatoslav Knyazev comments on the troubling results, and their wider implications.

Last week, the Ukrainian Center for Educational Quality Assessment, an agency responsible for examinations for admission to Ukrainian universities, publicized the results of testing of Ukrainian students' knowledge of Ukrainian language & literature and history.

The center discovered that the highest percentage of students who failed exams in these areas were from the Zakarpattia region (where 27.3% failed language and literature, and 29.2% history), Chernivtsi (20.9% and 29.1%, respectively) and Rivne (14.9% and 18.3%). All three of the regions are situated in the country's west. Kiev, Ukraine's capital, and Lviv, in the far west, scored the best results, according to the center's director.

© Sputnik / Grigoriy Vasilenko
UN Finds Controversial Ukrainian Minority Language Law Socially Divisive
Traditionally, Western sociologists studying Ukraine's language dynamics have superficially divided the country between a 'Ukrainian-speaking' west and a predominantly 'Russian-speaking' east. However, the results appear to demonstrate that something strange is going on. Commenting on the testing results, and on the state of Ukraine's education and language policy in general, independent journalist and blogger Sviatoslav Knyazev suggested that the testing was indicative of several major problems.

In his analysis, published by PolitRussia, the journalist suggested the Western regions' poor results were an indication, first and foremost, "that education has ceased, in principle, to be a priority area" for the Ukrainian government.

"In recent years," Knyazev recalled, "the number of educational institutions and teachers in the country has declined dramatically. In the near future, the education system will lose another 4,000 teachers, close 5% of its schools and nearly two-thirds of institutions of higher education. Educational programs themselves are also being trimmed. For example, students in younger grades will no long have to know their times tables, to read quickly and write essays; in the upper grades, a comprehensive study of history will be replaced with a 'national-patriotic' substitute."

© REUTERS / Gleb Garanich
If Kiev Invokes Martial Law, It Won't Be Because of Any 'Russian Threat'
Another problem, the journalist wrote, has to do with the fact that many Ukrainian children are beginning to feel a sense of despair over the depressed economic situation in the country. "Many of their parents are working in Russia (over four million), in Poland (about one million), in Italy (400,000) and the Czech Republic (over 100,000). Moreover, the kinds of workers demanded there for the most part do not require higher education. Meanwhile, Ukraine itself is facing the rapid degradation of its industry, and the demand for skilled labor is falling with the closure of industrial enterprises."

At the same time, the analyst noted, despite the efforts of Ukraine's government, virtually since the country's independence, but especially after the coming to power of Western-oriented governments in 2004 and again in 2014, many Ukrainians, by some estimates even a majority, continue to prefer the Russian language for their daily communication.

For instance, while Ukrainian sociologists recently released polls showing that 42% of Ukrainians use only the Ukrainian language to communicate with family (with 32% using Russian and 25% both languages), these figures may be hiding underlying realities, since Russian has become highly politicized following the 2014 Maidan coup d'état and the ensuing political conflict with Russia.

Knyazev recalled that as recently as 2008, polling conducted by Gallup had discovered that nearly 83% of respondents nationally preferred the Russian language over Ukrainian. Ukrainians' preference for the use of Russian language has also been confirmed in their language of choice on the internet, including searches using the popular search engines Google and Yandex, with only two of the top ten queries on Google asked in Ukrainian.

© Sputnik / Alexandr Maksimenko
Ukraine's Soros'-Inspired Education Reform 'Will Create Generation of Mentally Debilitated Citizens'
"For fairness' sake," the journalist noted, "it's necessary to note that rural areas in central and southern Ukraine are dominated not by the Russian or Ukrainian, but by a mixture of the two known as 'Surzhyk'. Moreover, the Ukrainian used by the country's television presenters today is radically different from that which was taught at schools during the Soviet era. Furthermore, differences in regional dialects are quite serious. A resident of Poltava [closer to the country's east], will likely have a hard time understanding someone from a Carpathian hamlet [in the country's west]. The dialects are perhaps as different from each other as 'standard' Ukrainian is from Russian."

Last week, commenting on the language testing results for Lenta.ru, Ukrainian historian Viktor Pirozhenko explained the problem as he sees it.

"Russian language is dominant everywhere – in everyday life, in the media, on the internet, in personal communication. In written form it is at a very low level, due to systematic teaching," he said.

"At the same time," Pirozhenko noted," a majority of students are failing to master Ukrainian, with the language remaining unfamiliar to them. They know it at the everyday level, but are not eager to learn the written language." As for Western Ukraine, the area "is the most depressed part of the country, with the highest levels of unemployment. Accordingly, students are focusing on going abroad to work at construction sites, as unskilled workers, and as service personnel. More than Ukrainian, they need Polish, Czech, Slovak and maybe Italian."

Ukraine's President Says EU Will Give Kiev Visa-Free Travel, Lots of Money 'Soon'
"Against this background," Knyazev wrote, "the fact that a quarter of even a third of the graduates from Western Ukrainian schools do not consider it necessary to study Ukrainian language and history is lamentable, but also logical. Working abroad at greenhouses, meat processing plants or plumbing companies, the language is an absolutely useless burden for them."

Even worse, the journalist added, is the fact that "against the background of aggressive attempts at Ukrainianization by authorities, the country's Russian and Surzhyk speakers are not being taught the Russian language correctly. Not knowing Russian grammar rules, but communicating in Russian or in a mixture of Ukrainian and Russian at the everyday level, they try to write using elements of Ukrainian orthography. The picture becomes very grim, with students failing to achieve full competency in either language."