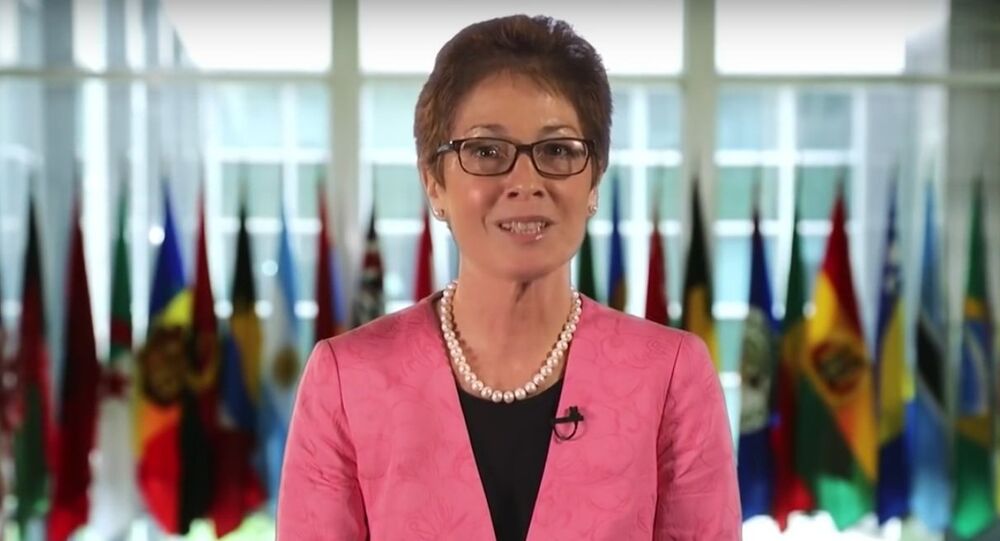 The US has a new ambassador in Kiev – Marie Yovanovitch. A veteran diplomat, Yovanovitch earlier served as ambassador to Armenia and Kyrgyzstan, the latter during a color revolution in 2005. But fear not, she's not going to Kiev to start trouble. In fact, according to a video by the Embassy, she's going to Ukraine to walk her dog and eat pierogis.

Incidentally, the diplomat already has experience in Ukraine, having previously served as the Deputy Chief of Mission to the country from August 2001 until June 2004, when she blew the whistle on a scandal involving the sale of four Ukrainian Kolchuga radar systems to Iraq, in violation of UN sanctions. According to experts, the scandal helped to bring down former President Leonid Kuchma, who was replaced with the Washington and Brussels-oriented Viktor Yushchenko following the events of the short-lived 'Orange Revolution' in late 2004, following Vovanovich's departure.

And now, Yovanovitch is back in Kiev. On Monday, in a video posted on the official YouTube channel of the US Embassy in Kiev, the ambassador appealed to Ukrainians, saying that she was happy to be back in Ukraine, and talking about her plans to travel the country with her dog and to eat some delicious Ukrainian pierogis.

© Sputnik / Stringer
Ukraine's Ambassador to Washington Proposes to Jointly Produce Lethal Weapons With US
"Hello, Ukraine!" the official remarked. "My name is Marie Yovanovitch. I am honored to be the new United States Ambassador to Ukraine. I am very pleased to return to Ukraine. I very much enjoyed living and working in Ukraine. Now I look forward to the opportunity to travel and explore the country with my dog…to meet old friends and make new ones, and to eat a whole bowl of Ukrainian pierogis."

Furthermore, the official noted that she had carefully watched the "great achievements" Ukraine has made "in the past two years" from afar. Yovanovitch did not comment on what those achievements were. In any case, she suggested that the changes which have taken place so far are not enough, and that "there's still a lot to do."

"I hope to work together with you to preserve a sovereign, integral, democratic and rich Ukraine. Glory to Ukraine!" the ambassador concluded, using the 'Glory to Ukraine! – Glory to Heroes!' expression that has been adopted by Ukrainian nationalists since the February 2014 Maidan coup d'état.

© Flickr / U.S. Embassy Kyiv Ukraine
US Ambassador Pyatt's Parting Message to Ukraine: Hang In There Guys!
Pyatt, US Ambassador to Ukraine since August 2013, became famous around the world after a leaked phone call with Assistant Secretary of State Victoria Nuland in February 2014 became viral, featuring the two discussing who among Ukraine's opposition would replace the democratically elected government.

Prior to his departure, Pyatt made a number of inspirational speeches, telling Ukrainians to hang tough, "trust in yourselves and lean on the confidence you have earned" in the conflict with Russia. During his tenure, the official had made a number of dubious compliments to Ukrainian officials which became the subject of internet jokes, from his prediction that Ukraine would soon become an 'agricultural superpower', to comments about the gas-dependent country becoming a 'gas exporter'.

Yovanovitch was born in Canada in 1958. Earning a BA in History and Russian Studies in 1980, she has served in the US diplomatic service since 1986. She is believed to speak Russian and French. Between February 2005 and February 2008, the diplomat served as the US Ambassador to Kyrgyzstan. From late February to March of 2005, Kyrgyzstan faced a color revolution, one which reporting by the New York Times later revealed was sponsored and supported directly and indirectly by US government and nongovernment sources.

© AFP 2021 / SERGEY BOBOK
'No Wall, No Yatsenyuk, No Money’: All That’s Left From Project Wall With Russia
From September 2008 until June 2011, Yovanovitch served as ambassador to Armenia. During her tenure there, she emphatically called for the country's 'democratization', with pro-opposition media outlets and political figures taking her words to mean that the US will support a change of government in that country, and pro-government Armenians complaining about Washington's interference in the country's domestic affairs.

Yovanovitch also has experience with Russia, having served as the deputy director of the State Department's Russia desk between May 1998 and May 2000.