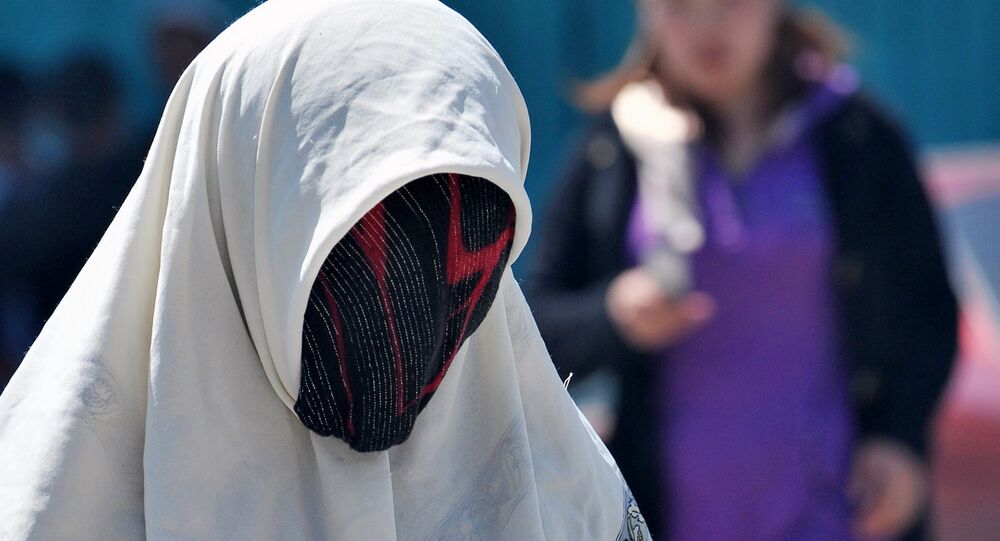 Interior Ministers from Angela Merkel's center-right CDU-CSU bloc have called for a partial ban on wearing the full-face Islamic veil in Germany.

© AFP 2021 / FETHI BELAID
Burkini Ban: Why Europe Prohibits Full-Body Swimsuits for Muslim Women
On Friday Germany's Federal Minister of the Interior Thomas de Maziere met with interior ministers from the CDU and its sister party, the CSU, who are in office in eight of Germany's 16 states. The ministers said they were unanimous in their support for a partial ban on the full-face Islamic veil.

"We unanimously reject the burqa, it does not fit our liberal-minded country," said de Maziere after the meeting with regional counterparts, adding that the burqa issue is about social integration, not security.

"We agree that we want to introduce a legal requirement to show one's face in places where it is necessary for our society's coexistence – at the wheel, at public offices, at the registry office, in schools and universities, in the civil service, in court," he said.

Maziere and the interior ministers also agreed to propose a package of security measures in response to a recent string of terrorist attacks in Germany, including more police officers, surveillance measures and EU border controls.

On Thursday Chancellor Merkel expressed her opposition to the full-face veil, but said that the implementation of a ban is a decision for the interior ministry.

"In my view, a fully covered woman has little chance of integrating in Germany," Merkel said.

While the center-right CDU-CSU bloc appears united in support for the partial burqa ban, Ralf Jager, SPD Interior Minister for the state of Nordrhein-Westfalens, expressed opposition to the ban.

"A burqa ban does not bring more security, rather it is only (being proposed) due to the election campaigns in some states," said Jager, who raised concern about the practicalities of the ban.

If burqas are to be banned, then "you also have to ban people from dressing up as St. Nicholas," Jager said.

News website Deutsche Welle illustrated Germany's divide over the issue with a series of commentaries on the issue, both for and against the burqa ban.

"For a free society it is necessary and beneficial to draw a clear dividing line. And that means the burqa should be banned in Germany. Just like polygamy, child marriage, and female genital mutilation — in the name of religion. That means politicians must say no. The lawyers will have to deal with the rest," wrote DW chief editor Alexander Kudascheff.

However, columnist Martin Muno said that the burqa should not be banned, since it is "only a symptom of the real issue of self-determination."

"The plans announced by German Interior Minister Thomas de Maiziere are at best an expression of helplessness: There should not be a general burqa ban, but at least a partial one. They call for facial concealment to be prohibited behind the wheel of a car or in public service. But if you please: What veiled woman is allowed to drive by herself, or allowed to pursue a career? Again, symptom and cause are confused — and as regional elections loom, with a populist view to supporters of the AfD and Pegida," Muno wrote.

© REUTERS / Heinz-Peter Bader
Burqa Bans, Possible Auxit: Hofer Kicks off Explosive Austrian Election Campaign
Last week CDU representative and former defense minister Rupert Scholz called for Germany to go further, to follow the example of France and impose a complete ban on women wearing the full-face veil, with a fine for those who break the law.

France introduced its ban on the full-face Islamic veil in 2010. According to French law, nobody can wear clothing intended to conceal the face in a public place. Anybody who breaks the law can be fined 150 euros ($170). Neighboring Belgium followed suit in 2011, and some regions of Switzerland and Italy have also banned the garment.

The full face Islamic veil has also been banned in some countries with a majority Muslim population.

Earlier this year the Egyptian government drafted legislation preventing women wearing the niqab in government institutions and public places, and restrictions on the full-face veil are already in place in Egypt's educational institutions.

In June 2015 the government of Chad banned anybody from wearing the full-face veil following a series of suicide bomb attacks by Boko Haram terrorists. Chad's prime minister said the veil was "camouflage," and ordered security forces to burn all full-face veils sold in markets.