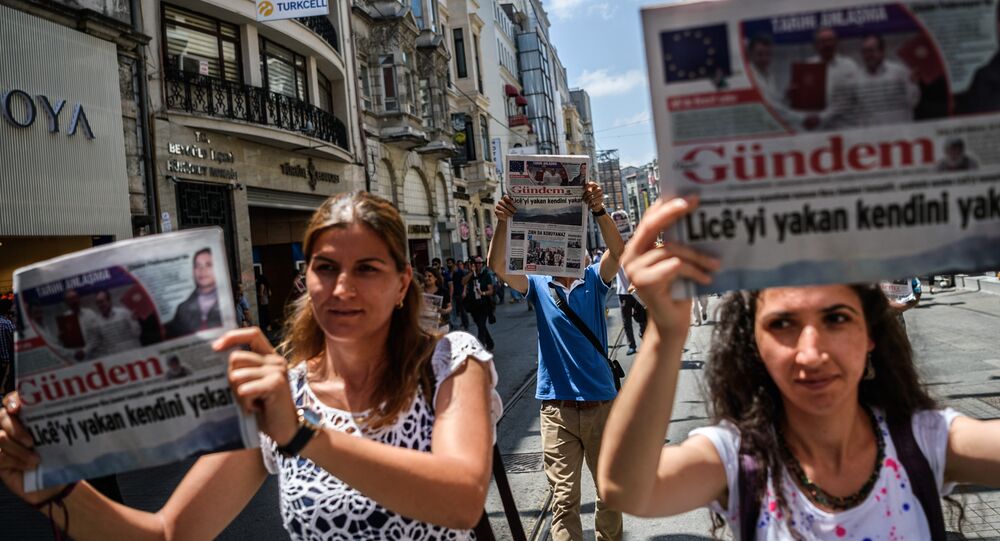 The Turkish government should end the closure of the pro-Kurdish daily newspaper Ozgur Gundem, Reporters Without Borders Eastern Europe and Central Asia desk head Johann Bihr said in a release on Wednesday.

WASHINGTON, August 17 (Sputnik) — On Tuesday, an Istanbul court ordered the temporarily closure of Ozgur Gundem on the grounds that the newspaper acts as propaganda machine for the Kurdistan Workers’ Party (PKK). Turkey considers the PKK to be a terrorist organization and has outlawed it.

"This unacceptable measure has dealt a new blow to pluralism and sent a strong intimidating signal to all journalists in Turkey. We call on the authorities to lift the measures taken against Ozgur Gundem," Bihr stated.

© AP Photo / Omer Kuscu
Press Freedom Must Be Part of EU-Turkey Deal - European Federation of Journalists
Bihr maintained that closing a media outlet is the most extreme form of censorship, which shows the government’s determination to gag instead of challenging the newspaper’s editorial policies.

Turkey's crackdown on journalists and imposition of restrictions on media freedoms have been condemned by the United States, the European Union and other entities.

Kerry Raises Question of Freedom of Press With Turkish Counterpart