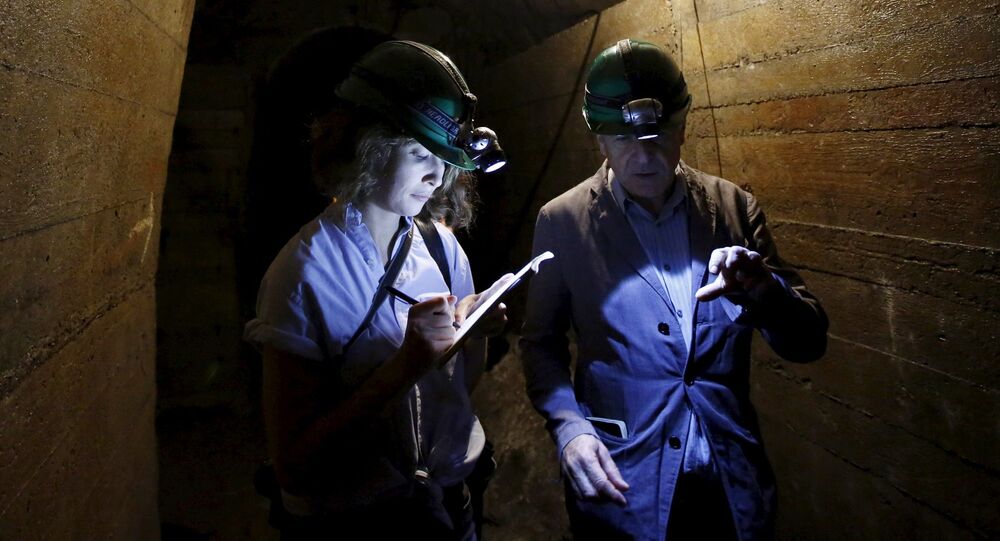 The German-Polish team searching for signs of a Nazi-era train allegedly entombed deep underground near the Polish city of Walbrzych has found proof of the tunnel's existence, a representative of the search group XYZ Christel Focken told Sputnik on Wednesday.

MOSCOW (Sputnik) — The Polish city of Walbrzych has come into the global spotlight this week after German and Polish explorers started digging in the area for what many believe could be an entombed Nazi "gold train" filled with treasures.

"We only found rocks on eight meters deep, very interesting that rocks are important for making a tunnel, so we think we have a tunnel underground or under the rocks. But we do not have the entrance [to the tunnel] at this moment," Christel Focken said, as the digging operation entered its second day.

© AP Photo / Bartlomiej Plebanczyk/Mamerki Museum
Searches for Nazi ‘Gold Train’ in Poland to Last 10 More Days – Search Team
In 1945, the 150-meter-long German train disappeared on its way from the then East Germany city of Breslau (now called Wroclaw and part of Poland) to Walbrzych. Some believe the carriage, that was carrying guns, industrial equipment, gems, gold pieces and other valuable treasure, was hidden away and sealed inside one of the clandestine tunnels near Ksiaz Castle, just outside of Walbrzych, although no documents have ever proven this theory.

"It's not a big treasure," Christel Focken said, adding the the group's primary interest was to finding the mouth of the tunnel that may be part of a now lost underground city the Third Reich supposedly built in this region to allow Adolf Hitler's inner circle to survive for a couple of years in the event of an atomic attack.

"We spent one half million zloty [some $131,800] for this area to dig there, we have no interest for treasure, we have only interest to know where the tunnel is ending," a search team representative stated.

Last year, a group of geologists and engineers from AGH University of Science and Technology in nearby Krakow spent a month searching the area with magnetic field detectors, thermal imaging cameras and radar, concluding that a tunnel may exist but that there are no signs of a buried train with treasure.