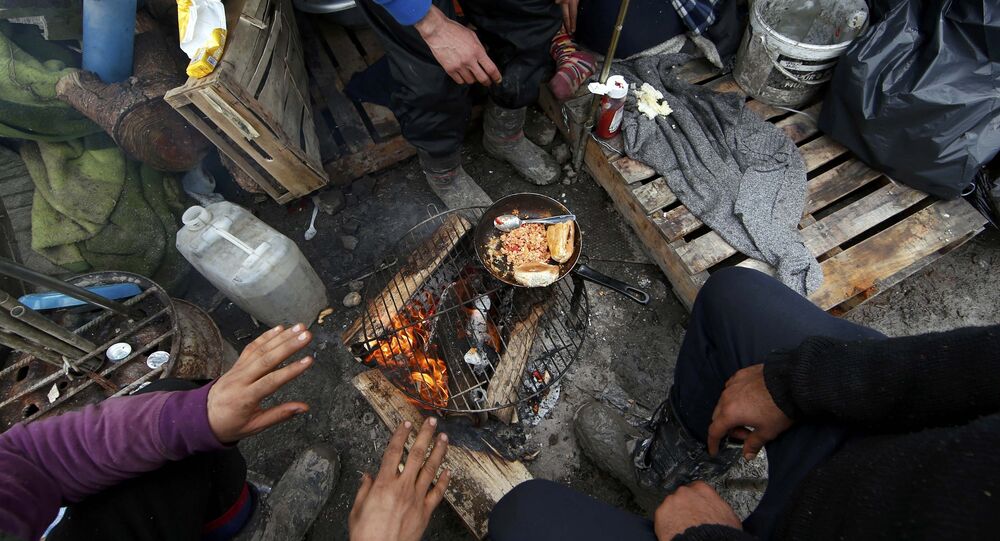 'They Don't Listen': France Helps Migrants But Forgets About Its Own Homeless

Last week French Housing Minister Emmanuelle Cosse said the government would offer money to citizens who take migrants into their homes as official asylums can’t cope with the huge influx.

In a letter to the Minister Groupe de Secours Catastrophe Français (GSCF), a public association helping homeless people, protested against the proposal, insisting that, instead of prioritizing help to migrants, the government should launch a program to help those who accommodate homeless people.

In an interview with Radio Sputnik GSCF president Thierry Velu said that humane as it was, the proposal should have come much earlier to prevent ”certain tragedies and the overall mess that is now happening in Calais.”

“It’s been five years that we have been fighting the government which completely ignores the homeless people who need help to return to normal life. We argue that if there are not enough shelters to take them in, let individual citizens host them, but the government keeps mum. And now they are telling people to accommodate the refugees and offer incentives to charities that help house these migrants,” Thierry Velu complained.

He said that officials did not listen to what associations were saying.

“We are dealing with politicians, they are not working on the ground and they are not listening to us. The elite are out of touch with reality, they don’t listen and this is very sad. ”

He added that if the government found a solution to the problem of migrants and the homeless everyone would be happy.

“The French people are not racists but I think they are a bit tired of people who refuse to see what’s going on. There are 9,000 people now living in a refugee camp in Calais, but no one is doing anything about this. We should accommodate these people before we take in those waiting at the border,” Thierry emphasized.

© AFP 2020 / PHILIPPE HUGUEN
France to Fulfill Promise to Host 30,000 Migrants Under EU Relocation Plan – Hollande
“There are an estimated 150,000 homeless people out there but, surprisingly, many of them have jobs! Come winter there will be more people dying in the streets and, once again, nothing will be done to help them!”

Speaking about the French people’s negative response to the Housing Minister’s proposal, Thierry Velu said that he was not surprised. First and foremost because they are going through hard times with scuffles happening every day in Calais.

“There are more than 66 million of us living in this country and we can afford to properly accommodate 9,000 refugees and stop this wave of hatred.

There are many people living from hand to mouth, people afraid of losing their jobs and of terrorist attacks. People living in the streets, French or refugee, need to be taken care of. Officials start moving only when people begin to riot.”

“The government and our MPs should listen to people working on the ground. The last thing I want is to see France being plunged into internal conflicts and civil wars,” Thierry Velu warned.

Housing Minister Emmanuelle Cosse said last week that the government would offer charities 1,500 euros for each migrant they manage to place with a family.