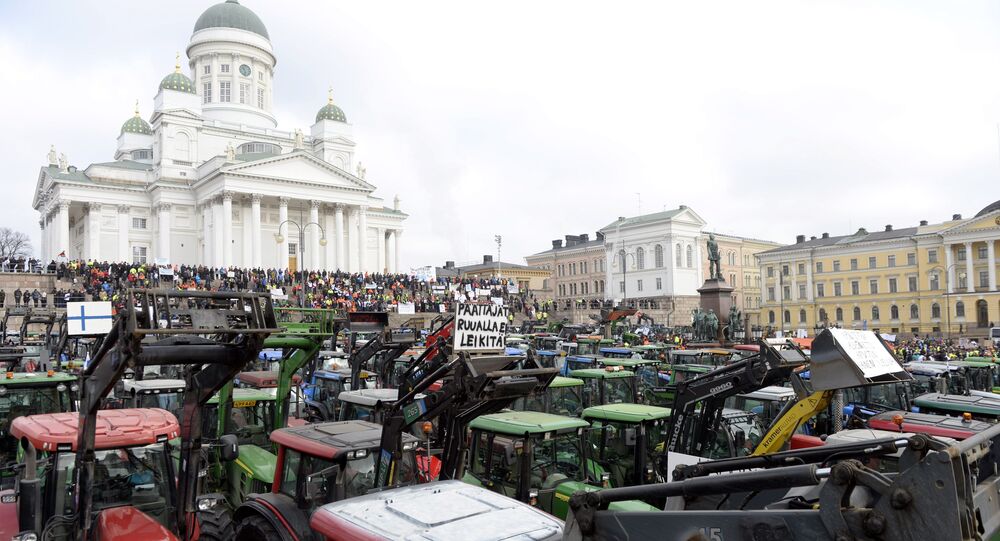 The Finnish government's draft budget proposal, presented earlier this week, triggered massive discontent across the Nordic country. Unsurprisingly, displeasure was highest among Finland's agricultural community, who by their own admission felt "betrayed." As a result, Finnish farmers are threatening an encore of last spring's "tractor march."

© Flickr / Dave Wild
No Milk and No Roses: Swedish Dairy Farmers Crushed by Sanctions
Last spring, hundreds of Finnish farmers drove their tractors into the Finnish capital Helsinki to protest the government's measures to aid the country's ailing agricultural sector. Whereas the blunt protest was duly observed by Finland's political establishment and brought the farmers a lot of sympathy and compassion from fellow Finns, it still failed to ease their plight.

​The organizers of last spring's tractor "offensive" on the capital feel that they and their fellow farmers were abandoned by elites, who failed to live up to their own promises. Today, they are ready to renew their protests, Finnish national broadcaster Yle reported.

© Flickr / Timo Newton-Syms
Reversal of Fortune: Finland's New Trade Minister's Russian Links
His fellow farmer and fellow villager Matti Lappalainen warned of a change of attitude, which might be menacing for the city of Helsinki.

"This time, we might have a different attitude. Last time we all agreed to behave, no drinking. I suspect that things might become harsher next time," a disappointed Lappalainen told Yle.

According to Juha Partanen of the Central Union of Agricultural Producers and Forest Owners (MTK), the ball is now still in the government's court to deliver the promises made last spring. Whereas he stated that a reprisal of a full-scale "tractor march" might not be a good idea, Partanen also added that protests by "small strike forces" might indeed be used to remind cabinet ministers of the farmers' troubles.

© Sputnik / Anton Denisov
Two Years On: How Russia's Agricultural Sector Reaps the Benefits of Sanctions
Meanwhile, relief efforts are reportedly underway. An extra 27 million euros in support and compensation for the agricultural sector is expected to be endorsed in the forthcoming budget talks. However, even this weighty sum is far from enough to compensate for the farming industry's snowballing losses, exacerbated by anti-Russian sanctions. Finland, which traditionally has been one of Russia's premier trade partners, was among the hardest hit by the EU-imposed sanctions. Finnish farmers' overall losses due to the Russian import ban amounted to 400 million euros (200 million in milk exports and 200 million in other agricultural products), the Finnish national broadcaster reported earlier.

"Compared to 2014, farms in our region alone have lost 10 million euros in supports and additional 40 million euros because of the lower market prices," North Savo MTK operations manager Jari Kauhanen pointed out.