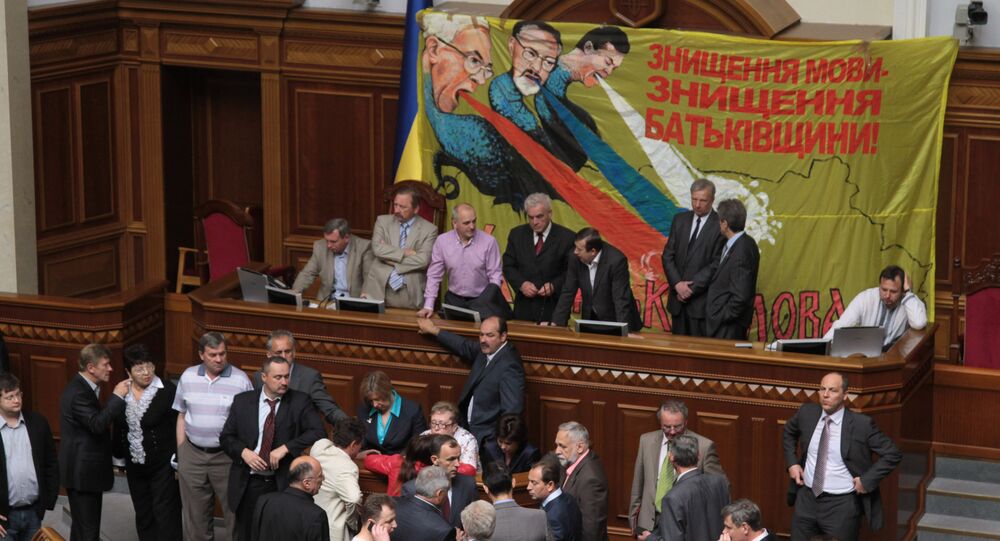 Experts of the UN Committee on the Elimination of Racial Discrimination (CERD) found out that the 2012 Language Act brought Ukraine into an unhealthy situation in which language became a reason for great divisions in the society.

© Sputnik / Vitaliy Belousov
Ukraine's Downplaying of Racial Discrimination Offenses Causes Concern - UN CERD
MOSCOW (Sputnik) — A Ukrainian bill, repelling rights of minority languages in the country, although had never been signed into law, brought Ukraine into an unhealthy situation in which language became a reason for great divisions in the society, the UN Committee on the Elimination of Racial Discrimination (CERD) said Friday.

In February 2014, violent clashes between protesters, including Ukrainian nationalists, and law enforcement broke out in central Kiev's Independence Square, forcing then-President Viktor Yanukovych to flee the country. In the wake of the Euromaidan, the local parliament adopted a bill to repeal the 2012 law on minority languages, which protected the status of languages other than Ukrainian, thus alienating many in the Russian-speaking regions of Ukraine. On March 1, 2014, then-acting President Oleksandr Turchynov vetoed the bill, effectively stopping its enactment.

"Experts further remarked that the 2012 Language Act was consistent with the provisions of the Convention as it promoted and recognized international standards on the rights of minorities to use their respective languages. The Act had expanded the area of use of Russian and other minority languages and had sparked protests in the country; the 2014 bill repealing the law had not been signed into the law and Experts noted that this was an unhealthy situation where language became a great divide," CERD said in a report on Ukraine's implementation of the provisions of the International Convention on the Elimination of All Forms of Racial Discrimination (ICERD).

© RIA Novosti . Aleksey Nichukin
We Are What We Speak? Language as Political Weapon in Ukraine
Ukraine's twenty-second and twenty-third periodic report was made during the 90th CERD session that took place in Geneva from August 2-26.

CERD is a body of independent experts which normally holds two sessions per year consisting of three weeks each.

ICERD is a third-generation human rights instrument, which commits its members to the elimination of racial discrimination and the promotion of understanding among all races, also requiring its parties to outlaw hate speech and criminalize membership in racist organizations. It was adopted and opened for signature by the UN General Assembly in December 1965, and entered into force in January 1969.