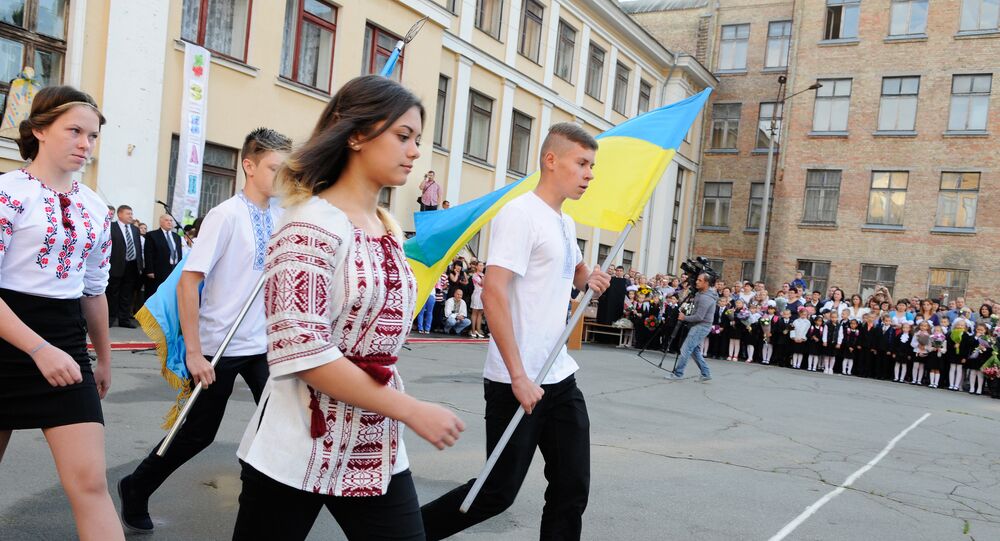 Ukraine's Ministry of Education has introduced radical changes to the country's education system, simplifying the school curriculum for grades 1-4. According to the reforms' critics, the changes will have catastrophic long-term effects for the country's future.

The curriculum changes, stepping into force in September, include a simplification of Ukrainian language lessons, the simplification of reading evaluation, and a reduction in grammar lessons, as well as writing and presentation studies, until the third grade.

© Sputnik / Stringer
Poroshenko Orders Highest Combat Readiness on Crimea Border, in Donbass
The reform also includes politicized changes to the reading, music and visual arts programs. The literary works of "irrelevant Soviet authors" have been removed from the curriculum, together with songs including the famous Soviet wartime song 'The Sacred War', which has been deemed 'anti-Ukrainian'.

In mathematics too, the requirements for early grades have been simplified, with the curriculum reducing memorization tables for basic sums. Total teaching time has been reduced, and 3,800 older teachers will have their wages reduced, based for the most part on their age and allegedly for 'carrying the tradition of Soviet schools'.

In its analysis of the changes to the curriculum, Rossiyaskaya Gazeta pointed out that the reform of the education system was the initiative of Education Minister Liliya Hrynevych, who prior to her entry into politics was involved in the Ukraine chapter of the Renaissance Foundation, associated with Hungarian-American billionaire George Soros. According to the Ukrainian Ministry of Education and Science's press statements on the reform, Hrynevych has expressed a special gratitude to Soros for the Fund's assistance on this "joint project."

Not everyone is thrilled about the changes. Commenting on the reform earlier this year, Evgeny Muraev, a Rada MP from the Kharkiv region, slammed the initiative in the harshest manner possible:

"It is very symptomatic that the 'simplification' of the school program was announced alongside the increase in gas tariffs, and suggestions that Ukrainians return to heating their homes using firewood….The main thing is to teach people to read, to write and count using their fingers. For a primitive economy or cleaning toilets in Europe nothing more is needed." Muraev noted, in an angry post on his Facebook page.

"The state has no money to invest in education, nor the desire to engage in its development." Furthermore, "Minister Hrynevych is a sufficiently experienced person; she has worked all her life in the education system, and is well aware of its problems. Therefore there can be no question about someone's poor understanding of the consequences of the introduction of these new evaluation criteria. She is deliberately adjusting these criteria in accordance with the situation which has developed, because she knows perfectly well that the state will not be able to find the funds to increase teachers' pay. Accordingly, it is easier to simply reduce the workload placed on them."

Ukrainian political scientist Alexander Dudchak was even more blunt, telling the online newspaper that "the country is facing a deliberate program aimed at the mental debilitation of the population. An uneducated population is easier to control, its interests are less expensive for the economic and political forces in power. Overall, this is merely a continuation of the strategy launched at Maidan…the transformation of the sovereign state of Ukraine into a collection of resources, among them the labor force. And this kind of slave labor should be cheap and unpretentious."

Pixabay
Ukraine Degrades to 'Arms Supermarket'
As for Soros' role, Dudchak suggested that the 'philanthropist' "was just one of the cogs in the global system of governance of peoples and states, working to establish control over significant areas of the globe without the use of the armed forces. His resources, and the US state apparatus standing behind him, has done a lot for the destruction of the education system, and not just in Ukraine. His poisonous patronage is known worldwide. And in Ukraine, as in other countries, there were many people, some consciously, others blindly, and others still for a small fee, who were ready to work for the destruction of their country using the money of Soros and other donors."

Unfortunately, the expert recalled,"Soros appeared in Ukraine while it was still part of the Soviet Union, and in this time financed a huge number of projects in a variety of professional associations, in social and government agencies. His contribution to the degradation of Ukraine and its transformation under the standards [ensuring] the West's interests are very high."