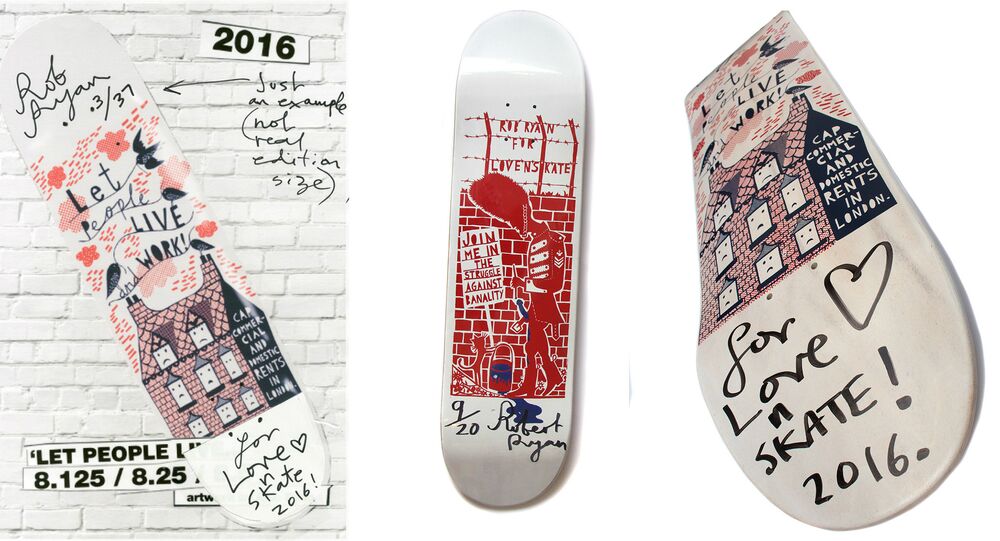 The damage rising rent in London is having on creative businesses is appearing at street level - and on skateboards.

Lovenskate, based in Tottenham has collaborated with artist Rob Ryan for its latest political stencil on London's housing crisis.

"We both lost our studios in Bethnal Green in east London a couple of years ago after the rent was massively increased. It was a real shame and the reason we were both out of there," Stu Smith, founder of Lovenskate told Sputnik.

"When I saw the design on one of Rob Ryan's posters I emailed him and suggested we put it on a board. It started as 'Let People Live,' but I asked him to consider adding, 'And Work,' because to me it sums up the situation in London."

​According to property website Zoopla, in the last five years, rents have increased by 36 percent in Shoreditch and almost 43 percent in Dalston. The rising rents pricing out the same artists who helped make the area popular in the first place.

© Flickr / Davide D'Amico
London, Where It's Cheaper to Stay in a Hotel Than Rent an Apartment

"I think there should be rent caps in areas like Shoreditch, so that they don't lose their culture and identity and affiliation with artists, creative start-ups and small businesses," Smith told Sputnik.

"I'm not some crazy socialist, but if London is going to continue being the city everyone thinks it is, then there has to be a place where people can start out and get on and produce the art, music, clothes, designs or films that give areas the reputation they get."

also Shoreditch's been much less 'cool' since the artists and musicians, and general ne'er do well 'bohemians' were priced out the area

​The Director of the Tate, Sir Nicholas Serota, also recently waded into the debate over the unaffordability of London rents, issuing a warning that London's creative success was threatened by the high cost of living.

During a Q&A at Tate Britain between Creative Industries Federation members and Sadiq Khan, just before he became mayor of London, Sir Nicholas said: "Young artists that might have thought of coming here no longer do because they can't afford to live in London. That must give us pause for thought."

​"Over the past 20 years London has been one of the great successes in the field of creativity. That success is very much threatened at present," he warned.

​According to Smith, whose skateboards often depict a political message, "areas of London, from Portobello Road to Brixton and Shoreditch, will be so expensive that London will lose what makes London the city it is.

"I don't want it to become a city that the creative industries can't afford to be in anymore."

© Photo : Lovenskate
Other designs with political messages featured on skateboards by Lovenskate, London

Smith's company, Lovenskate, it's now based in an industrial unit in Tottenham — and Smith has no plans to move.

"It would be a great shame if we had to move out of London in order to survive — but I'm not planning on going anywhere just yet."

​According to figures from HomeLet, rents in the UKs capital increased by 7.7 percent at the beginning of 2016 with tenants paying on average 1,543 a month to live in Greater London.