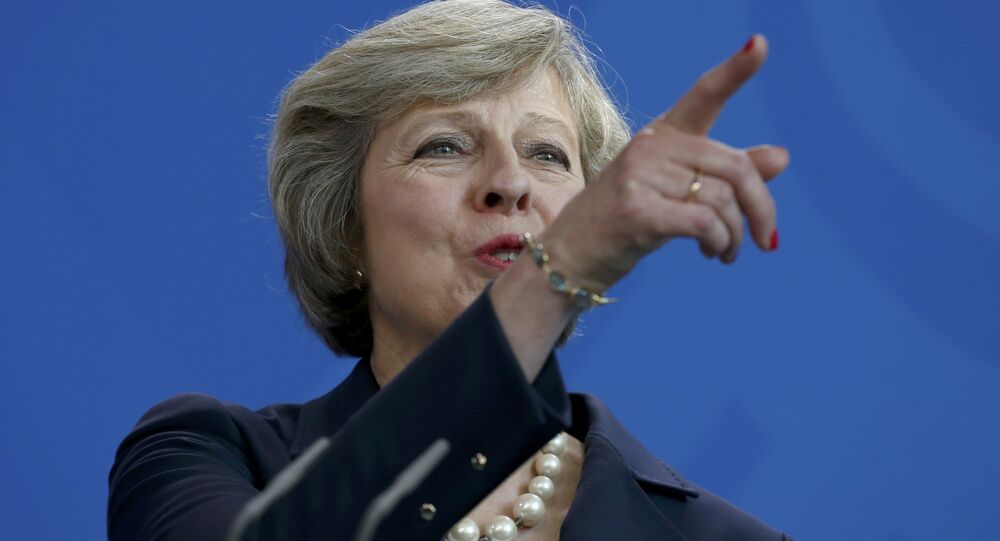 In a move reminiscent of the late 1960 campaign "I'm backing Britain", UK Prime Minister Theresa May is launching a new campaign on August 2 to boost Britain's industry and get the economy "firing" post-Brexit.

PM: “ While the UK is leaving the EU, we are not leaving Europe. Britain will remain an outward-looking nation.” pic.twitter.com/mMaQ2p1pT4

​The "I'm Backing Britain" campaign ran from 1968, when a group of workers volunteered to work an extra half hour each day in order to boost productivity.

© REUTERS / Andrew Yates T
'Ice Maiden' May Takes on Tough Mantle of 'Iron Lady' Thatcher in EU Talks
The move won the backing of the prime minister at the time, Harold Wilson, and quickly caught on, with the British flag being widely used for advertising purposes.

Britain's first female Prime Minister, Margaret Thatcher, was widely criticized for destroying British industry when she took on the unions — most notable the coalminers. Now, her female successor, May is set to rebuild Britain's industrial strategy in the new world after leaving the EU.

The new cabinet group will have at the top of its agenda "an economy that works for everyone, with a strong industrial strategy at its heart", based on wage growth and job security.

Ahead of the meeting, May said:

"As I said on my first day as prime minister, I will govern for the whole United Kingdom, and we will look to build an economy that works for everyone, not just the privileged few. We need to have our whole economy firing."

"That is why we need a proper industrial strategy that focuses on improving productivity, rewarding hard-working people with higher wages and creating more opportunities for young people so that, whatever their background, they go as far as their talents will take them. We also need a plan to drive growth up and down the country — from rural areas to our great cities."

"If we are to take advantage of the opportunities presented by Brexit, we need to have our whole economy firing. That's why this committee's work is of the highest priority, and we will be getting down to work immediately."

May is keen to promote Britain's new place in the world, unshackled from the European Union's institutions, while still trading with it and the rest of the world. Key players in the new cabinet are Chancellor Philip Hammond, Business and Energy Secretary Greg Clark, International Trade Secretary Liam Fox.