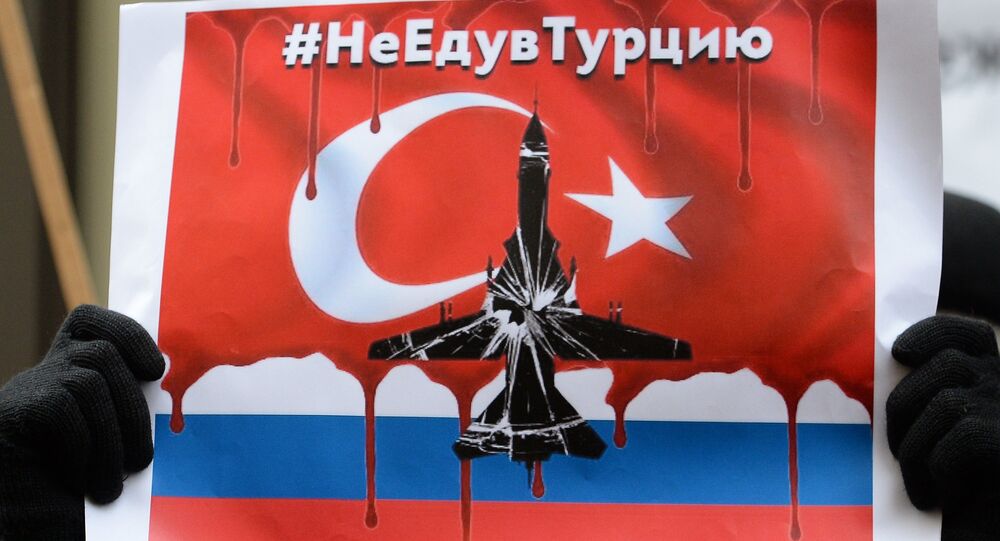 The Turkish economy minister could not confirm that the pilots who shot down the Russian Su-24 over Syria also bombed the Turkish parliament during the coup attempt.

MOSCOW (Sputnik) — Turkish Economy Minister Nihat Zeybekci told Sputnik he cannot confirm that the same pilots who took down a Russian plane in November 2015 also bombed the Turkish parliament during the coup attempt.

"Deputy Prime Minister Mehmet Simsek citing a media source said that pilots who took down the Russian jet and bombed the parliament are the same people. But I have no confirmation for this information," Zeybekci said.

© AP Photo / Selahattin Sevi, File
Birds of a Feather: What Made Gulen Erdogan's Archenemy
President Recep Tayyip Erdogan told Al Jazeera on Wednesday that two pilots of a Turkish Air Force F-16 fighter who shot down the Russian aircraft on November 24, 2015 were investigated on suspicion of having ties to a US-based cleric believed to be behind the failed military putsch.

Zeybekci told Sputnik he hoped all the problems of the bilateral relations with Russia would be resolved during a meeting between Turkish President Recep Tayyip Erdogan and Russian President Vladimir Putin on August 9.

The two presidents are expected to meet next Tuesday in St. Petersburg for the first time since the bilateral relations deteriorated in 2015 over Turkey's downing of a Russian Su-24 attack aircraft.

"Both sides are completely ready to return the level of bilateral relations which we had before November 24, 2015. Obviously, how and how soon it will be done only the time will show. I see hope that during the August 9 meeting problems will be resolved entirely," Zeybekci said.

© Sputnik / Ramil Sitdikov
Shocking Claim: NATO 'Directed Turkey's Downing of Russian Su-24' in Syria
Turkey and Russia ended seven months of tensions in late June when Turkish President Recep Tayyip Erdogan wrote a letter to Russian President Vladimir Putin in which he apologized for the downing of the Russian Su-24 over Syria in November 2015 and extended his condolences to the family of the pilot killed in the incident.

By apologizing for the incident, Ankara fulfilled Moscow’s condition for restoring the long-term partnership between the two countries. Erdogan also said in the letter that a legal case had been opened against the Turkish citizen suspected of involvement in the death of the downed plane’s pilot, which was another precondition for the normalization of ties. Putin subsequently lifted the ban on charter flights to Turkey and instructed the government to negotiate a revival of trade with Ankara.